From Infogalactic: the planetary knowledge core
Jump to: navigation, search
For the town within the Borough of Dartford, see Dartford.

The Borough of Dartford is a local government district with borough status in Kent, England, in the far north west of the county. Its council is in Dartford. It borders the borough of Gravesham to the east, Sevenoaks District to the south, the London Borough of Bexley to the west, and the Thurrock unitary authority of Essex to the north, across the River Thames, having the longest bridge and tunnel across the river to allow the M25 motorway to cross. According to the 2011 Census, its population was 97,365.

The borough was formed on 1 April 1974 by the merger of the Municipal Borough of Dartford, Swanscombe Urban District, and part of Dartford Rural District. In the mid-1990s review of local government in Kent, consideration was given to merging the borough with that of adjoining Gravesham to form a new unitary authority. However the proposal proved unpopular amongst residents who took part in the consultation and the two borough councils kept their identities.

Since 2010, the main area's MP is Gareth Johnson (Conservative) who replaced the outgoing Howard Stoate (Labour). The Mayor for the year May 2014 to May 2015 is Councillor Avtar Sandhu MBE. The Leader of the Council, from February 2006, is Councillor Jeremy Kite (Conservative). Councillors represent the following seventeen wards, as amended in 2001:[1]

NB the boundaries of these wards do not necessarily coincide with the parish boundaries, which follow

The following civil parishes are also included in the borough:

In addition to the settlements named above, there is the urban village of Joydens Wood to the south-west of the town.

Communications in the borough 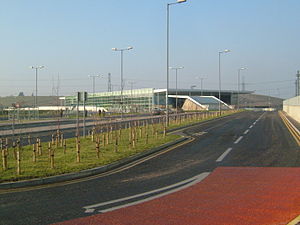 There are seven railway stations in the borough: at Stone; Greenhithe (for Bluewater); Swanscombe and Dartford, all on the North Kent Line; and Longfield and Farningham Road on the Victoria - Chatham Main Line. From Dartford there are three lines serving London and one to Gravesend, the Medway Towns and eastern Kent. For many services Dartford is the terminus.

Ebbsfleet International railway station on High Speed 1 opened in the east of the borough on 19 November 2007. Six high-speed services to Paris and five to Brussels run daily from here by Eurostar. The station also carries commuters to St Pancras station in London in only 17 minutes, and to Stratford International (next to the 2012 Summer Olympics site) in just 10 minutes, while eastbound commuter services link Ebbsfleet to Ashford International, Dover, Folkestone and other stations in Kent.

The first of the Fastrack bus services, using a combination of ordinary roads and dedicated 'bus tracks' commenced in March 2006. The service runs from the Temple Hill area of Dartford, through the town centre and on to Bluewater Shopping Centre, Greenhithe, Ebbsfleet International and Gravesend. 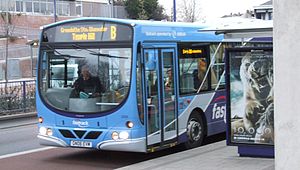 Three of the county’s main roads pass through the borough boundaries: the M25 and M20 motorways and the A2 dual carriageway. The A20, A225 and the A226 roads also cross the borough, among others.

Dartford gives its name to the Dartford Crossing of the River Thames, a pair of road tunnels (constructed in 1963 and 1980), with the Queen Elizabeth II Bridge (October 1991), dual-linking Kent with Essex and connecting sections of the London Orbital M25 motorway. 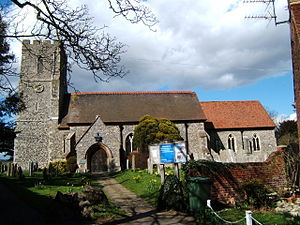 St Nicholas's church, Southfleet, is in the borough.

The layout of the district is clustered development in the northern half and buffered, dispersed settlement interspersed by the North Downs which is an escarpment of varied farms and woodland in the south.

Housing is a mixture of relatively high rise in Dartford centre through to low rise in all of the villages.

The number of listed buildings in the district exceeds 50. This includes 7 churches listed in the highest grading in the national listing system (Grade I).

As to residents of EU birth, only 3.3% of the population were such, slightly below the national average and two-thirds of this migration was from the accession countries from 2001-2011, a 12.5% higher proportion than that seen nationwide.

As to older people, the borough has a below national and regional proportion. In common with most of the country, an increase in people living in their area above the age of 74 took place, whether through change in preference or most commonly longevity, from 6.5% in 2001 to 7.1% in 2011.

With 80.8% of households with a car or van, this was 6.6% above the national average, however still marginally lower than South East's record and national-high of 81.4%.

1.0% of the population lived in a communal establishment in the area.

As to homes, as 12.6% of properties in the area are detached, these form a smaller minority than the regional and national averages (at 28.0% and 22.3% of dwellings respectively).

Its people in 2011 were more economically active than the regional and national average; while self-employed inhabitants were at parity with the national average, those in full-time employment were 6.0% greater.

As to religion, statistics mirrored closely the national average, save that more Hindus and Sikhs live in the borough, at a combined, equally split 3.2% of the total population and fewer Muslims, also forming 1.6% of the population. Being almost at the mean for the country, Christians form just over 60% of the area's population.[2] 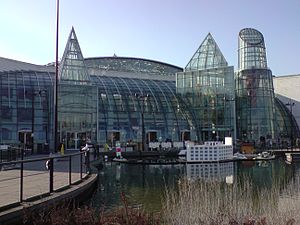 Although many of area’s traditional industries of papermaking, cement, and pharmaceuticals are in decline or closing down, and many of borough’s inhabitants travel away from the borough by rail and road (many commuting to London and other areas for work), there is still a large industrial and commercial base. Included among those areas include 'The Bridge' and Crossways to either side of the Queen Elizabeth II Bridge, areas around Greenhithe and a 740-acre (3.0 km2) site planned to contain five separate 'villages' in the Eastern Quarry near Bluewater Shopping Centre, itself a large employer.

In October 2012 Dartford and Gravesham councils co-announced plans for a major theme park to be built on the Swanscombe peninsula, which would create up to 27,000 jobs by 2018.