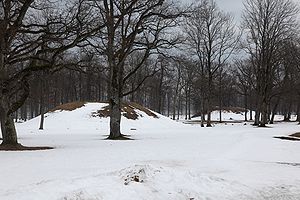 The burial mounds in the Borre National Park

The park covers 45 acres (182,000 m²) and its collection of burial mounds is exceptional in Scandinavia. Today, seven large mounds and one cairn can be seen. At least two mounds and one cairn have been destroyed in modern times. There are also 25 smaller cairns and the cemetery may have been larger. Some of the monuments are over 45m in diameter and up to 6m high. Borrehaugene provides important historical knowledge and can be seen as evidence that there was a local power center from the Merovingian period to the Viking age.[2]

The first investigations of the cemetery took place in 1852. Local road-builders used one of the mounds as a gravel-pit and in the process destroyed large parts of a richly equipped grave in a Viking ship. Antiquarian Nicolay Nicolaysen examined what was left of the mound. The grave contained weapons and riding equipment suggesting it was a man's grave. The excavations uncovered an unusually good selection of craft work, much of which is on display at the Viking Ship Museum in Oslo. [3]

This artistic craft work has become known as the Borre style and is today known for its beautiful animal and knot ornaments, which were often used for decorating harnesses. Some of the smaller cairns were investigated in 1925. They turned out to be simple cremation graves. New excavations were undertaken during 1989 to 1991, both in and around the national park.[4]

In 2015 dr. philos Bjørn Bandlien said that the harbour at Borre has likely been located.[5]

A couple of years prior to 2015, the remains of what some experts thinks was the building for a chieftain, was discovered by using georadar.[6]