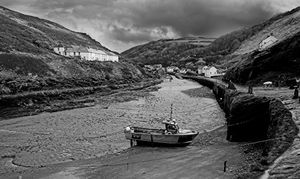 Boscastle Harbour
File:Boscastle path.JPG
View from the path leading to the harbour

Boscastle (Cornish: Kastel Boterel)[1][2] is a village and fishing port on the north coast of Cornwall, England, UK, in the civil parish of Forrabury and Minster. It is 14 miles (23 km) south of Bude and 5 miles (8 km) northeast of Tintagel.[3] The harbour is a natural inlet protected by two stone harbour walls built in 1584 by Sir Richard Grenville (of HMS Revenge) and is the only significant harbour for 20 miles (32 km) along the coast. The village extends up the valleys of the River Valency and River Jordan. Heavy rainfall on 6 August 2004 caused extensive damage to the village.

Boscastle lies within the Cornwall Area of Outstanding Natural Beauty (AONB). Almost a third of Cornwall has AONB designation, with the same status and protection as a National Park and the South West Coast Path passes through the village.

The name of the village comes from Botreaux Castle (pronounced "But'ry"),[4] a 12th-century motte-and-bailey fortress, of which few remains survive. The castle was anciently in the possession of the de Botreaux family, which became under William de Botereaux (1337–91) the Barons Botreaux.

The antiquary, John Leland in the mid 16th-century described the village ″... it is a very filthy town and il kept.″[5] Boscastle harbour is a natural inlet protected by two stone harbour walls built in 1584 by Sir Richard Grenville (of HMS Revenge). It is the only significant harbour for 20 miles (32 km) along the coast. Boscastle was once a small port (similar to many others on the north coast of Cornwall), importing limestone and coal, and exporting slate and other local produce.

The Rector of Boscastle is responsible for seven churches in the district: Forrabury (St Symphorian), Minster (St Merthiana), St Juliot, Lesnewth (St Michael and All Angels), Trevalga (St Petroc), Otterham (St Denis) and Davidstow (St David).[6] St Juliot is of particular interest to devotees of the works of Thomas Hardy since he acted as the architect for the church's restoration in March 1870 and this is where he met his first wife, Emma Gifford, who was the Rector's sister-in-law. Their love affair was the inspiration for his novel A Pair of Blue Eyes and later in life, some of his poetry.

In 2004 British television channel BBC 2 began broadcasting A Seaside Parish, a weekly series focusing on the life of the newly appointed Rector of Boscastle, Christine Musser.[7]

The village, with its picturesque harbour, is a popular tourist destination. Among the attractions are the Museum of Witchcraft, the Boscastle pottery shop, and access to the South West Coast Path.

Much of the land in and around Boscastle is owned by the National Trust, including both sides of the harbour, Forrabury Stitches, high above the Boscastle and divided into ancient "stitchmeal" cultivation plots, and large areas of the Valency Valley, known for its connections to Thomas Hardy.

The former harbour stables (part of the National Trust estate) are now a youth hostel run by YHA, popular with walkers. The National Trust runs a shop at the harbour,[8] and a visitor centre in the Old Smithy.

A flash flood on 16 August 2004 caused extensive damage to the village. Residents were trapped in houses as the roads turned into rivers: people were trapped on roofs, in cars, in buildings and on the river's banks. and the village's visitor centre was washed away.[9][10] Two Royal Air Force Westland Sea King rescue helicopters from Chivenor, three Royal Navy Sea Kings from Culdrose, one RAF Sea King from St Mawgan and one Coastguard S61 helicopter from Portland searched for and assisted casualties in and around the village.

The operation was coordinated by the Aeronautical Rescue Coordination Centre (ARCC) based at RAF Kinloss in Scotland in the largest peacetime rescue operation ever launched in the UK. A total of 91 people were rescued and there were no fatalities, only one broken thumb. Around 50 cars were swept into the harbour and the bridge was washed away, roads were submerged under 2.75 m of water, making communication effectively impossible until flood-waters subsided. The sewerage system burst, and for this range of health and safety reasons Boscastle was declared temporarily inaccessible.

The causes were: over 60 mm of rainfall (typically a month's rainfall) fell in two hours; the ground was already saturated due to the previous two weeks of above average rainfall; the drainage basin has many steep slopes, and has areas of impermeable slate causing rapid surface run-off; Boscastle is at the confluence (where tributaries meet) of three rivers - Valency, Jordan, and Paradise; a large quantity of water all arrived within a short space of time causing the rivers to overflow; the flooding coincided with a high tide, making the impact worse.

The effects were homes, businesses and cars belonging to more than 1,000 people were swept away; income from tourism was lost, which had an impact on livelihoods and the local economy; there were vast numbers of subsequent insurance claims; no lives were lost, partly due to the rapid response of the emergency services.

Boscastle was flooded again on 21 June 2007 although the scale of destruction was not nearly as serious as in 2004.