Serbs of Bosnia and Herzegovina

The Serbs of Bosnia and Herzegovina (Serbian: Срби у Босни и Херцеговини / Srbi u Bosni i Hercegovini) are one of the three constitutive nations of the country, predominantly residing in the political-territorial entity of Republika Srpska. In the other entity Federation of Bosnia and Herzegovina Serbs mostly live in Drvar, Glamoč, Bosansko Grahovo and Bosanski Petrovac. They are frequently referred to as Bosnian Serbs (Serbian: Босански Срби / Bosanski Srbi) in English, regardless of whether they are from Bosnia or Herzegovina. They are also known by regional names such as Krajišnici ("frontiersmen" of Bosanska Krajina), Semberci (Semberians), Bosanci (Bosnians), Hercegovci (Herzegovinians).

Slavs (Sclaveni) settled the Balkans in the 6th and 7th centuries. According to De Administrando Imperio (ca. 960), the Serbs had settled what is now Bosnia and Herzegovina. They inhabited and ruled "Serbia", which included "Bosnia" (with two inhabited cities; Kotor and Desnik), and the maritime principalities of Travunija, Zahumlje and Paganija, the first two having been divided roughly at the Neretva river (including what is today Herzegovina). Serbia was at the time ruled by the Vlastimirović dynasty. During the rule of Mutimir (r. 851-891), the Serbs were Christianized. The Serbs were important Byzantine allies; the fleets of Zahumlje, Travunia and Konavli (Serbian "Pomorje") were sent to fight the Saracens who attacked the town of Ragusa (Dubrovnik) in 869, on the immediate request of Basil I, who was asked by the Ragusans for help.[1] Prince Petar (r. 892-917), defeated Tišemir in Bosnia, annexing the valley of Bosna.[2] Petar took over the Neretva, after which he seems to have come into conflict with Michael, a Bulgarian vassal ruling Zahumlje (with Travunia and Duklja).[3] Prince Časlav Klonimirović (r. 927-960) managed to unite all mentioned Serb territories and established a state that encompassed the shores of the Adriatic Sea, the Sava river and the Morava valley as well as today's northern Albania. Časlav defeated the Magyars on the Drina river banks when protecting Bosnia, however, he was later captured and drowned in the Sava. After his death, Duklja emerged as the most powerful Serb polity, ruled by the Vojislavljević dynasty. Constantine Bodin (r. 1081–1101) installed his relative Stefan as Ban of Bosnia. Next, the Nemanjić dynasty acquired the rule of the Serbian lands. With the establishment of the autocephalous Serbian Church, Archbishop Sava founded the Metropolitanate of Zahumlje (1217–19). 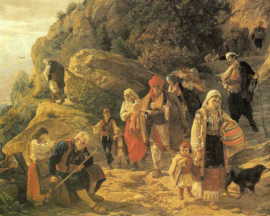 With the Ottoman conquest of medieval Serbia, there were large migrations towards Bosnia and Herzegovina.

In 1878, Bosnia and Herzegovina became a protectorate of Austria-Hungary, which the Serbs strongly opposed. On June 28, 1914, Bosnian Serb Gavrilo Princip made international headlines after assassinating Arch Duke Francis Ferdinand in Sarajevo. This sparked World War I leading to Austria-Hungary's defeat and the incorporation of Bosnia and Herzegovina into the Kingdom of Yugoslavia.

During the World War II, Bosnian Serbs were put under the rule of the fascist Ustaša regime in the Independent State of Croatia. Under Ustaša rule Serbs along with Jews and Roma people, were subjected to systematic genocide where hundreds of thousands of civilian Serbs were murdered. According to the US Holocaust Museum, 320,000-340,000 Serbs were murdered under Ustasha rule.[4] According to Yad Vashem Holocaust Museum and Research Center,"More than 500,000 Serbs were murdered in horribly sadistic ways, 250,000 were expelled, and another 200,000 were forced to convert"[5] during WWII in the Independent State of Croatia (modern-day Croatia and Bosnia).

Between 1945 and 1948, following World War II, approximately 70,000 Serbs migrated from the People's Republic of Bosnia and Herzegovina to Vojvodina after the Germans had left. 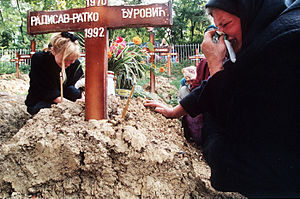 A Serb woman mourns at a grave at the Lion's cemetery in Sarajevo, 1992

Throughout most of the war the Serbs fought against both the Bosniaks and the Bosnian Croats. During Bosniak-Croat hostilities the Serbs co-operated largely with the Croats. There were exceptions to this, however, as Serb forces were also allied with the pro-Yugoslav Bosniaks of the Autonomous Province of Western Bosnia under Fikret Abdić. Serb forces also carried out ethnic cleansing operations against non-Serbs living within their territory, the most formidable was the Srebrenica massacre in July 1995. During most of the war, the Serb Republic comprised around 70% of Bosnia and Herzegovina's soil. During the entire length of war the Army of the Serb Republic maintained the Siege of Sarajevo, allegedly in order to tie down the Bosnian Muslim (Bosniak) forces and resources in what was the capital of the Bosnian-Herzegovinian state. Serb Republic maintained close ties with the Republic of the Serb Frontier and received volunteers and supplies from the Federal Republic of Yugoslavia during the war. The Serb Republic received a large number of Serb refugees from other Yugoslav hotzones, particularly non-Serb held areas in Sarajevo, Herzeg-Bosnia and Croatia. In 1993, the Owen-Stoltenberg peace treaty was suggested that would give 52% of BiH to the Serb side. It was refused by the Bosniak side as too large of a concession.

In 1994, the Federal Republic of Yugoslavia imposed sanctions after the National Assembly of the Serb Republic refused the Vance-Owen peace plan. In 1995, Operation Storm eliminated the Republic of the Serb Frontier. The Croatian Army continued the offensive into the Serb Republic under General Ante Gotovina. Some 250,000 Serbs fled to the Serb Republic and Serbia from Croatia, as the Serb side continued a full retreat of Serbs from the Una to the Sana river. The Croatian Army, supported by the forces of the Muslim-Croat Federation of Bosnia and Herzegovina came within 20 km of the de facto Bosnian Serb capital, Banja Luka. The war was halted with the Dayton Peace Agreement which recognized Republika Srpska, comprising 49% of the soil of BiH, as one of the two territorial entities of the Republic of Bosnia and Herzegovina. The Serb side suffered a total 30,700 victims - 16,700 civilians and 14,000 military personnel, according to the Demographic Unit at the ICTY. Although exact numbers are disputed, it is generally agreed that the Bosnian War claimed the lives of about 200,000 people - Bosniaks, Croats and Serbs. More reliable numbers place the number of deceased during the war at around 100,000-104,000 (ICTY, 2011).See: Casualties of the Bosnian War 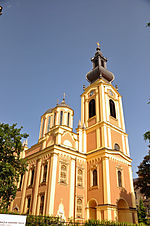 Cathedral of the Nativity of the Theotokos in Sarajevo 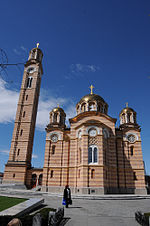 The Serbs of Bosnia and Herzegovina speak the Eastern Herzegovinian dialect of Serbian language. They founded the first printing house in this territory, Goražde printing house.

Bosnian Serb, Makarije Sokolović was the first patriarch of the restored Serbian Patriarchate, after its lapse in 1463 that resulted from the Ottoman conquest of Serbia. He is celebrated as saint. Several Bosnian Serbs are beatified in Serbian ortohodox church of which one of the most famous is Basil of Ostrog.

The first Serbian high school opened in Bosnia and Herzegovina was Sarajevo orthodox seminary in 1882. On the grounds of this seminary was founded the Theological Faculty in Foča, as part of the University of East Sarajevo.

There are many Serbian churches and monastery across the Bosnia and Herzegovina.

The dresses of Bosnia are divided into two groups; the Dinaric and Pannonian styles. In Eastern Herzegovina, the folk costumes are closely related to those of Old Herzegovina. 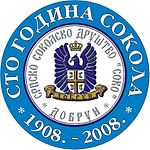 Serbs of Bosnia and Herzegovina have contributed significantly to the Yugoslav and Serbian sport.

First Serbian Sokol societies on the present territory of Bosnia and Herzegovina were founded in the late 19th century by intellectuals. Stevan Žakula, Croatian Serb, is remembered as a prominent worker in opening and maintaining sokol and gymnastic clubs. Žakula was the initiator of the establishment of Serbian gymnastics society "Obilić" in Mostar and Sports and gymnastic society "Serbian soko" in Tuzla. Sokol societies were also established in another cities across the Bosnia and Herzegovina.[6] 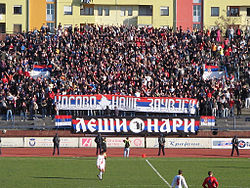 Football is the most popular sport among the Bosnian Serbs. The oldest Serbian Club in Bosnia and Herzegovina is Slavia Istočno Sarajevo, founded in 1908, while one of the most popular is Borac Banja Luka winner of Mitropa Cup and Yugoslav Cup. Serbian clubs participate in Premier League of Bosnia and Herzegovina and First League of the Republika Srpska which is run by Football Association of Republika Srpska. Notable players that represented Yugoslavia and Serbia include Branko Stanković, Milan Galić, Velimir Sombolac, Dušan Bajević, Boško Antić, Ilija Pantelić, Savo Milošević, Mladen Krstajić, Neven Subotić, etc. Zvjezdan Misimović served as captain of the Bosnia and Herzegovina national team from 2007 to 2012 while Ljupko Petrović led Red Star Belgrade to the Champions League trophy in 1991. 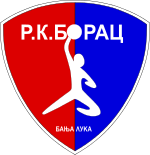 The most famous Serbian volleyball family, Grbić family, hails from Trebinje in Eastern Herzegovina. Father Miloš was the captain of the team that won first Yugoslav medal at European championship while sons Vanja and Nikola became Olympic champions with Serbian team. Other players that represented Serbia with success are Đorđe Đurić, Brankica Mihajlović, Tijana Bošković and Sanja and Saša Starović.

Further information: List of Serbs of Bosnia and Herzegovina