The Museum of Fine Arts (or MFA) in Boston, Massachusetts, is one of the largest museums in the United States. It contains more than 450,000 works of art, making it one of the most comprehensive collections in the Americas. With more than one million visitors a year, it is the 55th most-visited art museum in the world as of 2014[update]. 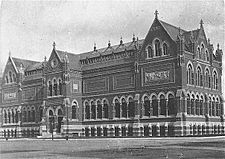 A view of the original Museum of Fine Arts building in Copley Square.

The Museum of Fine Arts was founded in 1870 and opened in 1876, with most of its initial collection taken from the Boston Athenæum Art Gallery. Francis Davis Millet, a local artist, was instrumental in starting the Art School affiliated with the museum, and in appointing Emil Otto Grundmann as its first director.[1] The museum was originally located in a highly ornamented brick Gothic Revival building in Copley Square designed by John Hubbard Sturgis and Charles Brigham which was noted for its massed architectural terracotta in an American building. It was built almost entirely of red brick and terracotta with a small amount of stone in its base. The brick was produced by the Peerless Brick Company of Philadelphia and the terracotta was imported from England.[2]

In 1907, plans were laid to build a new home for the museum on Huntington Avenue in Boston's Fenway-Kenmore neighborhood near the renowned Isabella Stewart Gardner Museum. Museum trustees decided to hire architect Guy Lowell to create a design for a museum so that could be built in stages as funding was obtained for each phase. Two years later, the first section of Lowell’s neoclassical design was completed. It featured a 500-foot (150 m) façade of granite and a grand rotunda. The museum moved to its new location later that year; the Copley Square Hotel eventually would replace the old building.

The second phase of construction built a wing along the The Fens to house paintings galleries. It was funded entirely by Maria Antoinette Evans Hunt, the wife of wealthy business magnate Robert Dawson Evans, and opened in 1915. From 1916 through 1925, the noted artist John Singer Sargent painted the frescoes that adorn the rotunda and the associated colonnades. Numerous additions enlarged the building throughout the years, including the Decorative Arts wing in 1928 (again enlarged in 1968) and the Norma Jean Calderwood Garden Court and Terrace in 1997. The West Wing, designed by I. M. Pei, opened in 1981, and was renamed the Linde Family Wing for Contemporary Art in 2008. This wing now houses the museum's cafe, restaurant, and gift shop as well as a special exhibition space.[3] 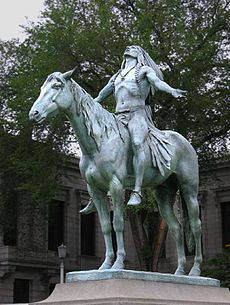 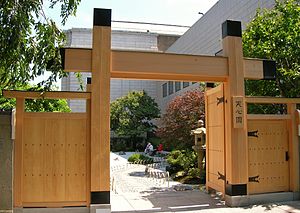 In the mid-2000s, the museum launched a major effort to renovate and expand its facilities. In a seven-year fundraising campaign between 2001 and 2008 for a new wing, the endowment, and operating expenses, the museum managed to total over $500 million, in addition to acquiring over $160 million worth of art.[4] During the global financial crisis between 2007 and 2012, the museum's budget was trimmed by $1.5 million and the museum increased revenues by conducting traveling exhibitions, which included a loan exhibition sent to the for-profit Bellagio in Las Vegas in exchange for $1 million. In 2011, Moody's Investors Service calculated the museum's had over $180 million in outstanding debt. However, the agency cited growing attendance, a large endowment, and positive cash flow as reasons to believe that the museum's finances would become stable in the near future.

In 2011, the museum put eight paintings by Monet, Renoir, Pissarro, Sisley, Gauguin, and others on sale at Sotheby's, bringing in a total of $21.6 million, to pay for Man at His Bath by Gustave Caillebotte at a cost reported to be more than $15 million.[5]

The renovation included a new Art of the Americas Wing to feature artwork from North, South, and Central America. In 2006, the groundbreaking ceremonies took place. The wing and adjoining Ruth and Carl J. Shapiro Family Courtyard were designed in a restrained, contemporary style by the London-based architectural firm Foster and Partners, under the directorship of Thomas T. Difraia and CBT/Childs Bertman Tseckares Architects. The landscape architecture firm Gustafson Guthrie Nichol redesigned the Huntington Avenue and Fenway entrances, gardens, access roads, and interior courtyards.

The wing opened on November 20, 2010 with free admission to the public. Mayor Thomas Menino declared it "Museum of Fine Arts Day", and more than 13,500 visitors attended the opening. The 12,000-square-foot (1,100 m2) glass-enclosed courtyard features a 42.5-foot (13.0 m) high glass sculpture, titled the Lime Green Icicle Tower, by Dale Chihuly.[6] In 2014, the Art of the Americas Wing was recognized for its high architectural achievement by being awarded the Harleston Parker Medal, by the Boston Society of Architects.

In 2015, the museum renovated its Japanese garden, Tenshin-en. The garden, which originally opened in 1988, was designed by Japanese professor Kinsaku Nakane.[where?] The garden's kabukimon-style entrance gate was built by Chris Hall of Massachusetts, using traditional Japanese carpentry techniques.[7][8]

The Museum of Fine Arts holds one of the most comprehensive collections in the world,[citation needed] and possesses materials from a wide variety of art movements and cultures. The museum maintains one of the largest online databases in the world,[citation needed] with information on over 346,000 items from its collection, accompanied with digitized images.

Some highlights of the collection include:

The libraries at the Museum of Fine Arts house 320,000 items. The main branch, the William Morris Hunt Memorial Library, named after the noted American artist, is located off-site in Horticultural Hall.[10]

Other notable works are in the collection, but the following examples are ones in the public domain and for which pictures are available.