Bougainville Island is the main island of the Autonomous Region of Bougainville of Papua New Guinea. This region is also known as Bougainville Province or the North Solomons. Its land area is 9,300 km2. The population of the province is 175,160 (2000 census), which includes the adjacent island of Buka and assorted outlying islands including the Carterets. Mount Balbi at 2,700m is the highest point. Although Bougainville Island is geographically part of the Solomon Islands archipelago, the state of Solomon Islands is not a part of Papua New Guinea.

Bougainville was first settled some 28,000 years ago by people from New Ireland. Three to four thousand years ago, Austronesian people arrived, bringing with them domesticated pigs, chickens, dogs and obsidian tools. The first European contact with Bougainville was in 1768, when the French explorer Louis de Bougainville arrived and named the main island for himself.[citation needed]

Germany laid claim to Bougainville in 1899, annexing it into German New Guinea. Christian missionaries arrived on the island in 1902.[citation needed]

Marines on Bougainville in 1943

During World War I, Australia occupied German New Guinea, including Bougainville. It became part of the Australian Territory of New Guinea under a League of Nations mandate in 1920.[citation needed]

In 1942, during World War II, Japan invaded the island, but allied forces launched the Bougainville campaign to regain control of the island in 1943.[1][2] Following the war, the Territory of New Guinea, including Bougainville, returned to Australian control.

Between 1988 and 1998, civil war on the island claimed over 15,000 lives. The Peace talks brokered by New Zealand began in 1997, leading to autonomy for the island. A multinational Peace Monitoring Group (PMG) under Australian leadership was deployed. In 2001, a peace agreement was signed including promise of a referendum on independence from PNG.[citation needed] 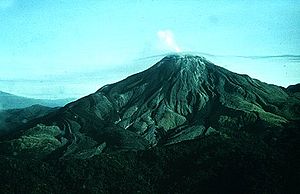 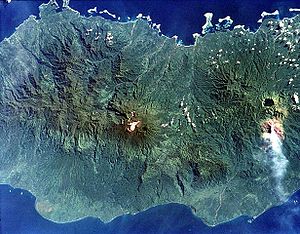 Northern part of the island

Bougainville is the largest island in the Solomon Islands archipelago. It is part of the Solomon Islands rain forests ecoregion. Bougainville and the nearby island of Buka are a single landmass separated by a deep 300-metre-wide strait. The island is 9000 square kilometres, and there are several active, dormant or inactive volcanoes which rise to 2400m. Mount Bagana in the north central part of Bougainville is conspicuously active, spewing out smoke that is visible many kilometres distant. Earthquakes are frequent, but cause little damage.

The daily volume of wild rivers appears to be decreasing. This has been affected by deforestation caused by the increased demand for gardens to feed the growing population.[3] Mining with its use of chemicals and its aftereffects poses other environmental issues, e.g. alluvial gold mining and the now decommissioned Rio Tinto-owned Panguna copper mine.[4]

The majority of people on Bougainville are Christian, an estimated 70% being Roman Catholic and a substantial minority United Church of Papua New Guinea since 1968. Few non-natives remain as most were evacuated following the civil wars.[citation needed] 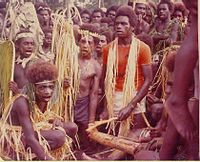 None of the languages are spoken by more than 20% of the population, and the larger languages such as Nasioi, Korokoro Motuna, Telei, and Halia are split into dialects that are not always mutually understandable. For general communication most Bougainvilleans use Tok Pisin as a lingua franca, and at least in the coastal areas Tok Pisin is often learned by children in a bilingual environment. English and Tok Pisin are the languages of official business and government.[citation needed]

Bougainville and its 1990s struggle for independence is the setting for the 2006 novel Mister Pip, by New Zealand author Lloyd Jones. The book was made into a film of the same name in 2012. It starred Hugh Laurie and was set in Bougainville.

An Evergreen Island (2000), a film by Australian documentary filmmakers Amanda King and Fabio Cavadini of Frontyard Films, showed the ingenuity with which the Bougainvillean people survived for almost a decade without trade or contact with the outside world.[7][8][9]

The Coconut Revolution, a documentary about the struggle of the indigenous population to save their island from environmental destruction and gain independence was made in 1999.[10]

Bougainville - Our Island Our Fight was a 1998 film by director Wayne Coles-Janess. It featured footage of the war from behind the blockade.