Boundary Commissions in the United Kingdom are non-departmental public bodies responsible for determining the boundaries of constituencies for elections to the Westminster (UK) Parliament, the Scottish Parliament and the National Assembly for Wales.[1] There are four UK Boundary Commissions: one each for England, Scotland, Wales (Welsh: Comisiwn Ffiniau i Gymru), and Northern Ireland.

Each Commission comprises four members, of which three actually take an active part in meetings. The Speaker of the House of Commons is ex officio Chairman of the UK Boundary Commission and as such presides over all proceedings, with a British High Court Justice being appointed as Deputy Chairman Commissioner to oversee meetings in each respective jurisdiction.

The Political Parties, Elections and Referendums Act 2000 under PM Tony Blair's government envisaged that the functions of the Boundary Commissioners would be transferred to the United Kingdom Electoral Commission, but this never transpired: the Local Democracy, Economic Development and Construction Act 2009 repealed the Act of Parliament (of 2000) effective from 1 April 2010.

In January 2013, parliamentary opposition to proposed legislative amendments recommended by this Sixth Review meant that the review was unable to be enacted because of a lack of coalition government consensus. Each Commission is required by Law to conduct subsequent reviews of all constituencies in its respective part of the United Kingdom at least every 5 years.

The Boundary Commissions are required to apply a set series of rules when devising constituencies.

Firstly, each proposed constituency has to comply with 2 numerical limits:

There are a small number of exceptions to the numerical limit on electorate which are specified in the legislation:

Having satisfied the electorate and area requirements, each Commission can also take into account a number of other factors:

It is evident that the other factors can to an extent be mutually contradictory, and therefore each Commission has discretion on how it applies them. In so doing, each Commission aims for a consistent approach within a review.

When a Commission publishes its proposals for public consultation, the consultation period is specified in that legislation:

It has been normal practice for local government electoral wards to be used as building blocks for constituencies, although there is no legislative requirement to do so. In Scotland, the introduction of multi-member wards in 2007 has made it harder to do so, since these wards each have a large electorate, and therefore a collection of complete wards may not give an electorate that is close to the required average.

Boundary changes can have a significant effect on the results of elections,[6] but Boundary Commissions do not take any account of voting patterns in their deliberations, or consider what the effect of their recommendations on the outcome of an election may be. 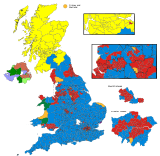 The 2015 constituencies showing the final results.

Customarily, each Commission conducted a complete review of all constituencies in its part of the United Kingdom every eight to twelve years. In between these general reviews, the Commissions were able to conduct interim reviews of part of their area of responsibility. The interim reviews usually did not yield drastic changes in boundaries, while the general reviews generally did. The most recent[7] general review in Wales was given effect by an Order made in 2006,[8] in England by an Order from 2007[9] and in Northern Ireland by an Order from 2008,[10] with the new boundaries used for the May 2010 general election. The most recent general review in Scotland was given effect in 2005,[11] and the resulting constituencies were used in the May 2005 general election.

Under the previous rules, the number of constituencies in Great Britain (England, Wales, and Scotland) had to "not be substantially greater or less than 613", of which at least 35 had to be in Wales. The City of London was not to be partitioned and was to be included in a seat that referred to it by name. The Orkney and Shetland Islands were not to be combined with any other areas. Northern Ireland had to have 16-18 constituencies.[12]

Under the earlier legislation, the terms of review were significantly different:

The Boundary Commissions are also responsible for reviews of boundaries for devolved parliaments and assemblies.

Once a Commission has completed a review, it submits a report to the appropriate Secretary of State who puts forward legislation to the Parliament implementing the recommendations. Parliament may approve or reject these recommendations, but may not amend them. If Parliament approves the recommendations, then the Sovereign signs an Order formalising the boundary changes which are to be used at the next general election. Any by-elections use the pre-existing boundaries.

Although for many years the legislation gave the Secretary of State power to modify a Commission’s recommendations, this power was never exercised. This separates boundary making by a combination of structure and convention from those elected from the resulting electoral areas, thus significantly reducing any scope for gerrymandering.