The Bourbon Reforms (in Spanish: Reformas Borbónicas) were a set of economic and political legislation introduced by the Spanish Crown under various kings of the House of Bourbon throughout the 18th century. The reforms were intended to stimulate manufacturing and technology in order to modernize Spain. In Spanish America the reforms were designed to make the administration more efficient and to promote its economic, commercial, and fiscal development. The crown did this in hopes that it would have a positive effect on the economy of Spain. Furthermore, the Bourbon Reforms were intended to limit the power of Creoles and re-establish Spanish supremacy over their colonies.[1]They achieved mixed results, alienated the local people of the Americas (which called themselves Criollos) and eventually led to the demise of all overseas dominions of the Spanish crown.[2]

At the end of the 17th century, Spain was an ailing empire facing declining revenues and the loss of military power. It was ruled by a weak King, Charles II of Spain, who would leave no successors. Even before the death of Charles II, the European powers were already positioning themselves to see which noble house would procure the Spanish throne with its vast empire. Louis XIV of France asked for, and gained, the Pope's consent for his grandson, Philip of Anjou, a grand nephew of Charles II, to ascend the throne. On his deathbed Charles II willed the crown to this French-born successor.

The transfer of the Spanish Crown to the Bourbons, in 1700, did not go uncontested. In the ensuing War of the Spanish Succession (1701–1713), Spain had to surrender some of its European territories, and grant the monopoly of the valuable slave trade with the Americas to England.[3] Philip V of Spain took measures intended to counter the decline of Spanish power. Even before the war the state of the Spanish empire was precarious. When Charles II died, the military was practically non- existent, consisting of one division, the treasury was bankrupt, and there was no promotion of commerce or industry. Philip V and his ministers needed to act quickly to reconstruct the empire.

The new Bourbon kings kept close ties with France and used many Frenchmen as advisors. Though French innovations in politics and social manners never fully replaced Spanish laws and traditions, they became an important model in both areas. As a result, there was an influx of French goods, ideas and books, which helped spread the ideas of the Enlightenment throughout the Spanish world. In a sense, all things French came into fashion during the subsequent century, and gave rise to a new type of person, the afrancesado, who welcomed this new influence. In addition, during the War of Succession the ports in Spanish America were blockaded by British and Dutch fleets. Spain turned to France for help with the export of its goods. This was the first time in Spanish colonial history that trade occurred with a foreign nation. This new commercial relationship stimulated the colonial economy, especially that of Chile.[4]

The early reforms were aimed at improving the economic and political structure of Spain. They sought to modernize agriculture, more efficiently construct ships, and develop an infrastructure to monitor and incite economic integration and development on a regional and national level. These reforms unfortunately fell through for Spain. These socio-economic reforms left the country with almost no investment capital. This hindered the nationalization of industries and also as a side-effect, it disrupted the class system. It left almost no middle class and separated the lower and upper significantly. As a result of these early reforms, the country was dwindling and its progression rate put it behind its neighboring countries such as Britain and France.[5]

The failure of these measures became evident when Spain, under Charles III, lost the Seven Years' War with Great Britain (1756–1763). However, the king's counselors secured more detailed reports of the colonies, and understood the need to take them fully into account. The new wave of reforms included larger exploitation of resources in the colonies, increased taxes, the opening of new ports allowed to trade only with Spain, and the establishment of several state monopolies. 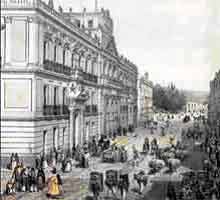 Palacio de Mineria, Mexico City. The crown sought to make silver mining more productive and silver magnates ennobled, so they created the College of Mines and the Royal Mining Court.

The bulk of the changes in Spanish America came in the second half of the 18th century. Early reforms consisted primarily of creating one new viceroyalty to improve the administration of the overseas possessions. The Viceroyalty of New Granada was created in 1717, although it was suppressed just six years later and only permanently established in 1739. A second viceroyalty was created much later in 1776 in the Río de la Plata.[6] In the same year an autonomous captaincy general was also established in Venezuela. Under Charles III colonial matters were concentrated in a single ministry, which took powers away from the Council of the Indies. Furthermore, the advances Americans (Criollos) had made in the local bureaucracy in the past century and a half, usually through the sale of offices, were checked by the direct appointment of (supposedly more qualified and disinterested) Spanish officials.

Charles III also initiated the difficult process of changing the complex administrative system of the former ruling family, the Habsburgs. (See José de Gálvez.) Corregidores were replaced with a French institution, the intendant. The intendancies had the desired effect of further decentralizing the administration at the expense of viceroys, captains general and governors, since intendants were directly responsible to the Crown, not to the former, and were granted large powers in economic and political matters. The intendancy system proved to be efficient in most areas and led to an increase in revenue collection. Intendency seats were mainly based in large cities and successful mining centers. Almost all of the new intendants were Peninsulares, that is people who were born in Spain, exacerbating the conflict between Peninsulares and Criollos, who wished to retain some control of local administration. Charles III and Charles IV also reversed the advances Criollos had made in the high courts (audiencias). Under the Habsburgs, the Crown had sold audiencia positions to Criollos. The Bourbon kings ended this policy. By 1807, “only twelve out of ninety-nine [audiencia] judges were creoles.”[7]

With regards to the economy, collection of taxes was more efficient under the intendancy system. In 1778 King Charles III established the “Decree of Free Trade,” which allowed the Spanish American ports to trade directly with each other and with most ports in Spain. Therefore, “commerce would no longer be restricted to four colonial ports (Veracruz, Cartagena, Lima/Callao, and Panama)."[8] Tax reductions were given to the silver mining industry. Tobacco proved to be a successful crop after state monopolies were expanded. Also during this time, many of the colonies began to produce an abundance of resources that became vital to many European powers and the British colonies in North America and the Caribbean, despite the fact that most of this trade was considered contraband, because it was not carried on Spanish ships. Most of the Bourbon kings tried to outlaw this trade through various programs like increasing the customs receipts, though the efforts provided little result.[9]

Spanish America barely had an operational military before the Bourbon reforms, and what it did have was inconsistent and scattered. The Bourbons created a more organized militia and first used men deployed straight from Spain as officers, but soon this broke down, as locals took most positions. The colonial militias became a source of prestige for “status-hungry” Criollos. The hierarchy of the military was racially based. Militias were often created along race lines, with militias for whites, blacks and mixed race people. Almost all the higher officers were Spanish-born, with Criollos occupying the secondary levels of command.

The Bourbons also made the government more secular. The political role of the Church was diminished, though never removed completely. Unlike the Habsburgs, who often selected churchmen to fill political offices, the Bourbons preferred to appoint career military officers. This process reached a high point with the Suppression of the Society of Jesus in 1767. The Jesuits were one of the wealthiest religious orders and had been instrumental in the missionary work carried out in the Americas and the Philippines. Because they had major rivals in the other orders of the church, their dismissal was greeted with covert approval. The crown also tried to place the more secular clergy in the church hierarchy, reversing a trend since the beginning of the colonial period of having the regular clergy fill these posts. Overall, these changes had little effect on the Church as a whole. Towards the end of the Bourbon reign, on the "eve of independence, the crown attempted to confiscate church property, but the measure proved hard to enforce."[10]

Though the legislation passed by the Bourbons did much to reform the Empire, it was not enough to save it. The racial tensions continued to grow and there was still massive discontent, the most important of which were the Rebellion of Túpac Amaru II and Revolt of the Comuneros. This discontent led many people to band together and lead several revolts. Criollos, Mestizos, and Indians were among the most common to be involved in such resistance movements.[11] Over time, these uprisings led to the fight for the independence of the American colonies.

In Spanish unless otherwise noted.