Bourgogne-Franche-Comté (sometimes abbreviated BFC) is a Region of France created by the territorial reform of French Regions in 2014 by the merger of Burgundy, and Franche-Comté. The new region came into existence after the regional elections of December 2015, on 1 January 2016.[1] Bourgogne-Franche-Comté is a provisional name, created by hyphenating the merged regions in alphabetical order; its regional council must approve a new name for the region by 1 July 2016, which then must be approved by France's Conseil d'État by 1 October 2016.[2]

The text of the law gives interim names for most of the merged regions, combining the names of their constituent regions separated by hyphens. Permanent names will be proposed by the new regional councils and confirmed by the Conseil d'Etat by 1 October 2016.[2] Hence the interim name of the new administrative region is composed of the names of former administrative regions of Bourgogne and Franche-Comté. 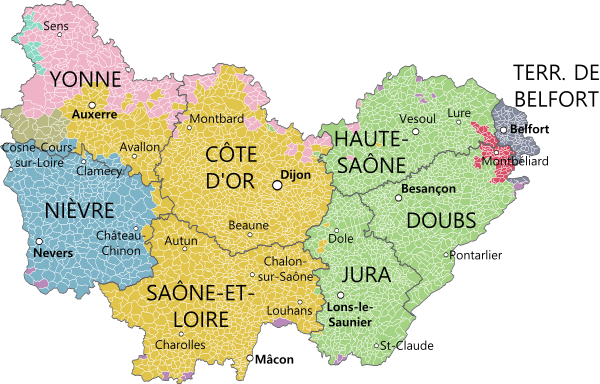 Map of the new region with its eight départements, colored according to the historical provinces as they existed until 1790.
Bourgogne
Franche-Comté
Nivernais
Champagne
Alsace
Orléanais
Montbéliard
Île de France
Others

On 14 April 2014, François Patriat and Marie-Guite Dufay (the presidents of Burgundy and Franche-Comté, respectively) announced in a press conference the desire for the reunification of the two regions, further to the declarations of Prime Minister Manuel Valls, who proposed a simplification of the administrative divisions of France.

On 2 June, the two regions were shown as one on the map presented by President François Hollande. These two regions are the only ones to have voluntarily discussed a merger, and their alliance was the only one not needing revision by the National Assembly or the Senate.

Under the Acte III de la décentralisation, the merger of the two regions was officially adopted on 17 December 2014. It became effective on 1 January 2016.