Bournemouth Borough Council is the local authority of Bournemouth in Dorset, England. The council is now a unitary authority, although between 1974 and 1997 it was an administrative district council with Dorset. Previously most of the borough was part of Hampshire.[1]

The Borough can trace its history back to 27 August 1890 when the Municipal Borough of Bournemouth was created by Royal Charter. On 1 April 1900 it received County Borough status which lasted until 1974.[1]

The borough is administered by Bournemouth Borough Council.

The Council has 18 wards covering the borough.

The Council consists of 54 elected members, 3 from each of the 18 wards. Prior to 2003 there were 19 wards (57 members). Elections take place every four years where all seats are contested.

The composition of the Council:

The whole Council will be up for election in 2019. 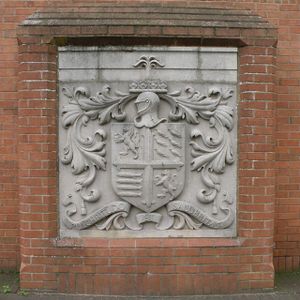 The coat of arms of Bournemouth

The arms of Bournemouth were granted on 24 March 1891. The crest (above the shield) consists of four English roses surmounted by a pine tree. The motto (below the shield) is "Pulchritudo et Salubritas", Latin for "beauty and health". The colours of the shield, the main part of the coat of arms, are taken from the royal arms of King Edward the Confessor, in whose royal estate the area now known as Bournemouth was situated. The four salmon represent those to be found in the River Stour, which marks the boundary between Christchurch and Bournemouth. Each of the lions holds a rose between its paws. The six birds, also taken from Edward the Confessor's arms, are martlets, heraldic birds with no legs (based on the folk belief that swallows never stopped flying and so did not need legs). The roses in the arms are emblems both of England and of Hampshire, which Bournemouth historically belonged to.