Bournemouth University (abbreviated BU) is a public university in Bournemouth, Dorset, England, with its main campus situated in neighbouring Poole. The university was founded in 1992 as one of the new universities, however the origins of its predecessor date back to the early 1900s.

The university was a finalist for two prizes in British higher education – the 2009 Times Higher Education (THE) Awards for "University of the Year" and "Research Project of the Year".

Traditionally known for its focus on professional courses, in the 2000s Bournemouth University invested in research to underpin its curriculum and maximise its contribution to the regional and national economies. The university currently has over 16,000 students, including over 1,500 international students.

The university is recognised for its work in the media industries, being home to the Centre for Excellence in Media Practice (CEMP). Graduates from the university have worked on a number of Hollywood films, including "Gravity", which was awarded the Achievement in Visual Effects Oscar at the 86th Academy Awards.[3]

The university was first founded in the early 20th century as the predecessor Bournemouth Municipal College. The institution initially offered courses to prepare students for degrees of the University of London (1942-1976).[4] In the mid 1960s there were 6,850 day and evening students.[5] As early as 1965, in the House of Commons, the rate of students at the Institute was highlighted, and the Secretary of State was asked to consider a university application.[5] At the time the Government did not intend to create any new universities until the late 1970s,[5] and so Bournemouth would have to wait until the 1990s before its ambitions of gaining a university would be fulfilled.

Bernard MacManus was appointed Director in 1983 and presided over a significant expansion in curriculum and student numbers, against an backdrop of initial uncertainty over the Weymouth Campus.[6] During this time the Talbot Campus was consolidated having been completed earlier in 1976, and the Student Village was also constructed. A second campus was also established, at Landsdowne. The period between 1983 and 1994 also saw the Institute expand into new frontiers such as heritage, tourism, tax, and public relations, in addition to computer animation and information systems.[7] Many of these would later become areas of strength for the university, for example in the form of the National Centre for Computer Animation.

This expansion under Dr MacManus allowed the institute to make a strong case for polytechnic status, which the institution briefly gained in 1990, before in 1992 proceeding to become Bournemouth University.[6] The change to university status following polytechnic status was swift, taking less than three years.

By September 1994, over 9,000 students had been recruited nationally, and internationally, to undergraduate and postgraduate degrees.[4] By 1996 the university had 11 endowed professorial posts, including:[8]

In 2009 Lord Phillips of Worth Matravers, then the most senior Law Lord and President of the Supreme Court, was installed as Chancellor.

In recent years the university has announced a significant investment programme, and by 2018 it plans to invest £200 million in new buildings and facilities including a new Student Centre, which opened in March 2015.[9]

In 2011 it was announced that the university would be awarded the Queen's Anniversary Prize for Higher and Further Education, for "world-class computer animation teaching with wide scientific and creative applications".[10] In 2014 the quality of courses at the university received acknowledgement from the Prime Minister in Parliament.[11]

The university was the first such institution in 2013 to receive a "commended" grade, the highest award possible from the Quality Assurance Agency for Higher Education (QAA).[12]

The university crest was granted in 1992 by the official heraldic authority for England, the College of Arms.[13] The Talbots, the heraldic beasts on the shield, represent the location of the main campus.[13] The crowns denote the three Saxon crowns of the Kingdom of Wessex, and the nearby boroughs.[13] The blue represents the nearby sea, reflecting the location of the university,[13] on the Jurassic Coast of Dorset. The red dragon in the Coat of Arms represents Dorset, and the scroll represents learning.[13] The coat of arms appears in ceremonial occasions, for example on literature associated with the annual graduation ceremony, currently held in November at the Bournemouth International Centre.

The motto Discere Mutari Est of the university is Latin and is translated as To Learn is to Change. 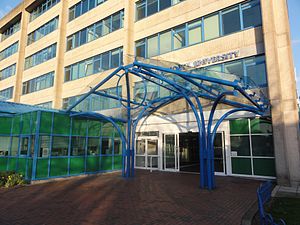 Main entrance on the Talbot Campus

The Talbot Campus is situated at Fern Barrow on the Poole side of the boundary with Bournemouth. It is where the main University buildings are located, including the students' union and the main library. The campus also contains cafes and refectories, Dylan's and The ground up bars, a doctors' surgery, shop and a branch of Santander.

The Landsdowne Campus is just outside Bournemouth's town centre, housing six teaching and administrative buildings, the students' union nightclub and various halls of residence located around Christchurch Road, Oxford Road and Holdenhurst Road. A new Bournemouth University International College is currently being built at the campus.[14] Unlike Talbot, Lansdowne is not a self-contained campus.

University accommodation is divided among eight halls of residence:

Bournemouth University is currently divided into the following faculties:

The university validates courses in chiropractic for the Anglo-European College of Chiropractic, an associate college of Bournemouth University.[19]

Bournemouth University appeared for the first time in the Times Higher Education World University Rankings[20] in 2015/16: it was ranked 401-500 (shared) in the world and, with a combined score of 30.0, reached the 57th position among UK universities. The university is also on an upward trend in national rankings: in 2016, it raised from 65th to 54th in The Complete University Guide,[24] from 71st to 63rd place in The Guardian University League Table[25] and from 88th to joint 82nd in the Sunday Times Good University Guide.[26]

The library at Bournemouth University has won two national awards: in 2007 the Library Design Award of the Society of College, National and University Libraries (SCONUL) for a large university;[27] and in 2009 the Times Higher Education Leadership and Management Award for "Outstanding Library Team".[28]

The Students' Union at Bournemouth University (SUBU) is based on the Talbot Campus at the student centre opened in 2015. Its facilities are open to students at Lansdowne Campus and the partner colleges.

SUBU has over 100 clubs and societies, runs the NERVE radio and has a volunteering arm (Volunteering & RAG).

SUBU operates numerous venues including the nightclub the Old Fire station on the Lansdowne campus, along with Dylans bar on Talbot [29]