Bournemouth railway station, originally known as Bournemouth East (1885 to 1899) and then Bournemouth Central (1899 to 1967), is the main railway station serving the town of Bournemouth in Dorset, England. It is located on the South Western Main Line from London Waterloo to Weymouth. British Transport Police maintain a complement of Rail Community Officers at the station.[1] 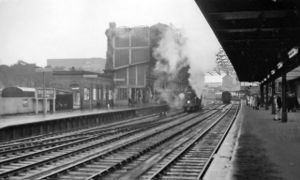 The station was designed by William Jacob, chief engineer of the London and South Western Railway, and opened on 20 July 1885 as Bournemouth East replacing the original station of the same name which was located on the other side of Holdenhurst Road.[2] The station was located some distance away from the town centre on the insistence of town authorities of the time. It was renamed Bournemouth Central on 1 May 1899 and became Bournemouth on 10 July 1967 following the closure of Bournemouth West. By 1967 third rail electrification had reached Bournemouth and continued beyond to Branksome and Bournemouth Depot but no further. From the end of steam most trains were formed of 4REP EMUs coupled up with one or more unpowered 4TC units. The 4TC units would be uncoupled at Bournemouth and attached to a Class 33/1 diesel locomotive for the onward journey to Weymouth. This continued until the electrification of the line from Branksome to Weymouth and the introduction of Wessex Electric units in 1988. The end of steam also saw the removal of the station's centre tracks which ran between the up and down lines serving platforms 2 and 3 respectively and the demolition of the locomotive sheds located to the west; the station car park is now located on this site.

The station roof was severely damaged by the Great Storm of 1987 that hit the South of England. It was extensively refurbished in 2000 by Railtrack after many years of disrepair and being surrounded by scaffolding to protect people from falling debris.

Ticket barriers were installed in 2008.

The current Bournemouth railway station was once the centre of a small network featuring 5 different railway lines - South Western Main Line, Southampton and Dorchester Railway, Ringwood, Christchurch and Bournemouth Railway, Salisbury and Dorset Junction Railway and Somerset and Dorset Joint Railway all of which passed through Bournemouth and surrounding villages.

The station has four platforms:

Platforms 3 and 4 are continuous, and both can accommodate full-length trains. This means Bournemouth has one of the longest platforms in the country. Other stations with this arrangement include Gloucester, Cambridge and Edinburgh Waverley. 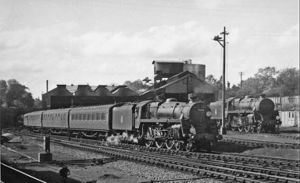 A small locomotive depot was opened at Bournemouth East in 1870, but closed in 1883.[5] This was replaced by a larger shed, adjacent to Bournemouth Central station, in 1883. This in turn was supplemented by another shed nearby in 1888. In 1921, the 1883 shed was closed and the 1888 one was extended to increase capacity, and between 1936 and 1938 this was rebuilt and enlarged. The new shed included a 65 ft (20 m) turntable and a 50 LT (51 t) hoist. However the facilities remained cramped and awkwardly sited; there were proposals to move the depot to Branksome which were never implemented. This site therefore remained in use until June 1967 when the site was cleared.[6] 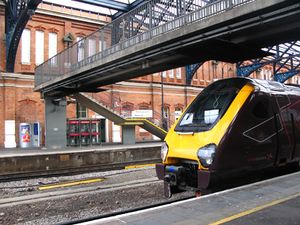 From 1990 Network SouthEast and then Connex South Central used to operate a London Victoria-Bournemouth service, but this was truncated at Southampton and is now operated by Southern. The service was one of the few regular services to use platform 1.