Bovingdon is a large village in Hertfordshire, England, four miles southwest of Hemel Hempstead, and it is a civil parish within the local authority area of Dacorum. It forms the largest part of the ward of Bovingdon, Flaunden and Chipperfield, which had a population of 3,819 at the 2001 census.[1] 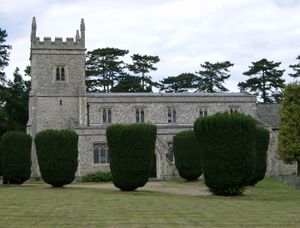 The name is first mentioned in deeds from 1200 as Bovyndon. It could originate from Old English Bufan dune meaning "above the down" or from Bofa's down, the down belonging to Bofa.

There are two churches in the village. The Baptist Church and the Anglican Church. The Baptist church started as a Wesleyan Methodist Church and changed to Baptist. St Lawrence Church was built in 1845 by Talbot Bury. The churchyard is the second largest in Hertfordshire[citation needed] and includes an avenue of clipped yew trees. The village also includes some old cottages. There are three pubs in the village centre, The Halfway House, The Bull and The Bell. A fourth, the Wheatsheaf, is now closed.

The village is sometimes confused with Bovington Camp in Dorset. Halfpenny Green Airfield in Shropshire was renamed from Bobbington, the name of the local village, during WWII after a B-17 tried to land there when the crew became lost.

The village is medieval in origin but it has expanded significantly since the 1940s. It now has a large commuter population. The old parts of the village are mostly around the High Street and the Green.

The Bobsleigh Inn on Box Lane, just east of the village, is a large house with some parts dating to the sixteenth century which is now a hotel and restaurant. It was the Bovingdon Country Club until 1964 when Tony Nash, the son of the owner, was part of the gold medal winning British two man bobsleigh team at the Winter Olympics at Innsbruck in Austria. It was renamed the Bobsleigh Inn in his honour. During World War 2 many celebrities stayed at the Country Club while entertaining troops at the airfield, including Bob Hope, James Stewart and Glenn Miller.[2]

The airfield was built in 1942. Between 1943 and 1946 it became a B-17 operational training base for units such as 92nd Bomber Group, B-17 Flying Fortress Combat Crew Replacement Centre (CCRC), 11th CCRC, and 8th USAAF HQ Squadron. The RAF resumed control until 1951, then the USAF took over again until 1962 flying B-26 Marauders, B-29 Superfortresses, and B-50 Superfortresses. General Dwight D. Eisenhower's personal aircraft was said to be located here, as Bovingdon was the closest Eighth Air Force airfield to London.

Flying ceased in 1969, though some flying scenes for the film Hanover Street were shot there in 1978. The airfield served as airport for Hemel Hempstead during most of the postwar period.

Several films were made there including The War Lover, 633 Squadron, Hanover Street, an episode of the Persuaders,The Man With The Golden Gun (the flying car scene) and Mosquito Squadron.

The airfield site houses a VOR navigational beacon, code BNN. The airspace above the airfield and nearby Chesham is known as the Bovingdon stack and is a holding area for aircraft approaching Heathrow Airport, 20 miles to the south. At busy times on a clear day a dozen planes circle.

Part of the airfield was used to build The Mount Prison during the 1980s; it was located on the site of the aircraft hangars and administration blocks. The remainder of the site is used for a Saturday market and there is a permanent circuit for banger racing although there has not been any regular racing since 2008. The airfield is also a site for paintballing.

Of the three original runways, the North East/South West runway is still complete, and used for parking on market days.

The North West/South East runway is completely gone. The East/West runway is still complete, the Eastern end of which is used for the weekend Market, the Western end used to be used by the Farmers aircraft. The control tower still exists, but is in a very poor state. A lot of the taxiways, and the 2nd World War Bomb Dump trackways are mostly gone, a victim of hardcore reclamation, a common end of a large number of disused airfields in the UK.

Climate in this area has mild differences between highs and lows, and there is adequate rainfall year round. The Köppen Climate Classification subtype for this climate is "Cfb" (Marine West Coast Climate/Oceanic climate).[3]