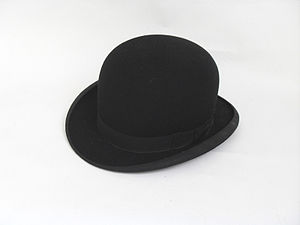 The bowler hat, also known as a bob hat, derby (US), or bombín,[1] is a hard felt hat with a rounded crown originally created in 1849 for the British soldier and politician Edward Coke, the younger brother of the 2nd Earl of Leicester. The bowler hat was popular with the working class during the Victorian era, and later on with the middle and upper classes in the United Kingdom and the eastern United States.[2] Later in the United Kingdom, it would come to be worn as civilian work dress by former officers of the Queen's Guard.[3] In Bolivia, women of Quechua people have worn bowler hats since the 1920s when British railway workers introduced them there.

Cultural significance in the United Kingdom and Ireland

From the early 20th century bowler hats were commonly associated with businessmen working in the financial districts, also known as "City Gents". The traditional wearing of bowler hats with City business attire died out in the 1980s.[4] In modern times Bowlers are not common, although the City Gents remain in certain parts of England keeping the tradition alive. The City Gent is arguably the most iconic stereotyped view of an Englishman complete with Bowler and rolled umbrella. For this reason, two bowler-hatted men were used in the logo of the British building society (subsequently bank), Bradford & Bingley.[5]

In Scotland and Northern Ireland the bowler hat is traditionally worn by members of the main Loyalist fraternities such as the Orange Order, the Independent Loyal Orange Institution, the Royal Black Preceptory and the Apprentice Boys of Derry for their parades and annual celebrations.[6]

The bowler hat is said to have been designed in 1849 by the London hat-makers Thomas and William Bowler to fulfill an order placed by the firm of hatters Lock & Co. of St James's.[7] Lock & Co. had been commissioned by a customer to design a close-fitting, low-crowned hat to protect Coke's gamekeepers' heads from low-hanging branches while on horseback at Holkham Hall in Norfolk. The keepers had previously worn top hats, which were easily knocked off and damaged. Lock & Co. then commissioned the Bowler brothers to solve the problem.[7] The identity of the customer is less certain, with many sources suggesting it was William Coke.[3] However research carried out by a nephew of the 1st Earl of Leicester cast some doubt on this story, and it is now believed that the bowler was invented by Edward Coke, the younger brother of the 2nd Earl of Leicester.[2] When Coke arrived in London on 17 December 1849 to collect his hat he reportedly placed it on the floor and stamped hard on it twice to test its strength; the hat withstood this test and Coke paid 12 shillings for it.[8]

Outside the United Kingdom 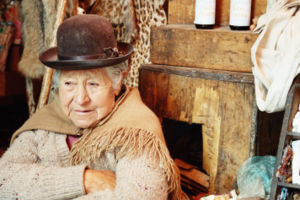 The bowler, not the cowboy hat or sombrero, was the most popular hat in the American West, prompting Lucius Beebe to call it "the hat that won the West".[9] Both cowboys and railroad workers preferred the hat because it would not blow off easily in strong wind while riding a horse, or when sticking one's head out the window of a speeding train. It was worn by both lawmen and outlaws, including Bat Masterson, Butch Cassidy, Black Bart, and Billy the Kid. In America the hat came to be commonly known as the derby,[3] and Wild West outlaw Marion Hedgepeth was commonly referred to as "the Derby Kid".

The bowler, called a bombín in Spanish, has been worn by Quechua and Aymara women since the 1920s, when it was introduced to Bolivia by British railway workers. For many years, a factory in Italy manufactured the hats for the Bolivian market, but they are now made locally.[10]