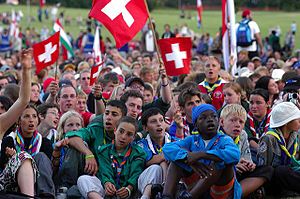 Scouts coming from various nations sing at the European Jamboree 2005.

A Scout (in some countries a Boy Scout, Girl Scout or Pathfinder) is a boy or a girl, usually 10 (AS in Australia)–18 years of age, participating in the worldwide Scouting movement. Because of the large age and development span, many Scouting associations have split this age group into a junior and a senior section. Scouts are organized into troops averaging 20–30 Scouts under the guidance of one or more Scout Leaders. Troops subdivide into patrols of about six Scouts and engage in outdoor and special interest activities. Troops may affiliate with local, national, and international organizations. Some national Scouting associations have special interest programs such as Air Scouts, Sea Scouts, outdoor high adventure, Scouting bands, and rider scouts. Some troops, especially in Europe, have been co-educational since the 1970s, allowing boys and girls to work together as Scouts.

Robert Baden-Powell founded the Boy Scouts as an organization in 1908, a few months after the first scout encampment at Brownsea Island Scout camp in 1907.[1] Baden-Powell got the idea from his experiences with the British Army in South Africa. To advance his ideas, Baden-Powell wrote Scouting for Boys for boy readership, which describes the Scout method of outdoor activities aiming at developing character, citizenship, and personal fitness qualities among youth.[2] Many boys joined Scouting activities, resulting in the movement growing rapidly to become the world's largest youth organization.

The Scout program is designed to develop youths who have a high degree of self-reliance, initiative, courage, helpfulness, integrity, sportsmanship, and resourcefulness. Scouts should be helpful; understand their society, heritage, and culture; have respect for the rights of others; and be positive leader-citizens.[3][4]

Over time, the Scout program has been reviewed and updated in many of the countries where it is run, and special interest programs developed such as Air Scouts, Sea Scouts, outdoor high adventure, Scouting bands, and rider scouts, but the same core values and principles as Baden-Powell originally envisaged still apply.

Originally, the Scout program was aimed at 11- to 16-year-old boys. However, the younger brothers of Scouts started to attend Troop meetings, and so the Wolf Cub section was started. It was also evident that young girls wanted to participate in similar activities, but the Edwardian values at the time would not allow young boys and girls to "rough and tumble" together, causing the Guide Movement to be created.

While most Scouts may join a troop after finishing Cub Scouts, this is not required. As Scouts get older, they often seek more challenging and diverse activities. He may later join another affiliated program for older children, such as Exploring, Venturing, or Rovering. 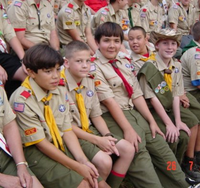 Scouts at a campfire ring at summer camp.

A Scout learns the cornerstones of the Scout method, Scout Promise, and Scout Law. These are designed to instill character, citizenship, personal fitness, and leadership in boys through a structured program of outdoor activities.[5][6] Common ways to implement the Scout method include spending time together in small groups with shared experiences, rituals, and activities, as well as emphasizing good citizenship and decision-making that are age-level appropriate. Cultivating a love and appreciation of the outdoors and outdoor activities are key elements. Primary activities include camping, woodcraft, first aid, aquatics, hiking, backpacking, and sports.

Scouts are known throughout the world for performing acts of public good and sometimes acts of heroism. For example, a Scout foiled a 2008 assassination attempt on Maldives' President Maumoon Abdul Gayoom by "grabbing an attacker's knife as the man leapt from a crowd and lunged at the leader".[7] The scout, Ibrahim Jaisham, a male member of the co-educational The Scout Association of Maldives, sustained minor injuries during the intervention.[8][9]

Camping most often occurs on a unit level, such as in the troop, but there are periodic camporees and jamborees. Camporees are events where units from a local area camp together for a weekend. These often occur a couple times a year and usually have a theme, such as pioneering. Jamborees are large events on a national or international level held every four years where thousands of Scouts camp together for one to two weeks. Activities at these events include games, scoutcraft competitions, patch trading, aquatics, woodcarving, archery, and rifle and shotgun shooting.

For many Scouts, the highlight of the year is spending at least a week in the summer as part of an outdoor activity. This can be a long event such as camping, hiking, sailing, canoeing, or kayaking with the unit or a summer camp operated on a council, state, or provincial level. Scouts attending a summer camp, generally one week during the summer, work on merit badges, advancement, and perfecting scoutcraft skills. Some summer camps operate specialty programs, such as sailing, backpacking, canoeing and whitewater, caving, and fishing.

A large part, compared to younger and older sections, of the activities are related to personal progression. All Scouting organizations have an advancement program, whereby the Scout learns scoutcraft, community service, leadership, and explores areas of interest to him. This Badge system or Personal Progressive Scheme is based on two complementary elements:

Most Scouting associations have a highest badge that require mastering scoutcraft, leadership, and performing community service. Only a small percentage of Scouts attain them. 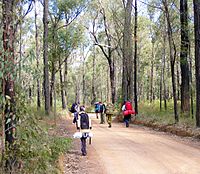 A group of Australian Scouts hike along a fire trail in a national park.

The troop is the fundamental unit of the Scouts. This is the group a Scout joins and via which he participates in Scouting activities, such as camping, backpacking, and canoeing. The troop leadership, youth and adult, organizes and provides support for these activities. It may include as few as a half-dozen Scouts, or as many as seventy or more. Troops usually meet weekly.

Each troop is divided into patrols of around five to ten Scouts. A patrol's independence from the troop varies among troops and between activities. For instance, a troop typically holds ordinary meetings as a unit. Patrols' autonomy becomes more visible at campouts, where each patrol may set up its own area for cooking and camping. However, on a high adventure trip which only a small part of the troop attends, divisions between patrols may disappear entirely. Patrols may hold meetings and even excursions separately from the rest of the troop, but this is more common in some troops than in others.[10] Each patrol has a Patrol Leader (PL) and Patrol Second (PS), or Assistant Patrol Leader (APL). Some troops mix older and younger Scouts in the same patrols, so that the older Scouts can teach the younger ones more effectively, other troops group Scouts by age, so that the members of one patrol have more in common.

In most countries a local organisation, a "Scout Group", combines different sections together into a single body. Scout Groups can consist of any number of sections of the different Age Groups in Scouting and Guiding. Scout Groups can be single sex or have boys and girls in separate and/or co-ed sections depending on the group and the national organization. In some countries, the different sections are independent of each other, although they might be sponsored or chartered by the same organisation, such as a church.

The Scout uniform is a specific characteristic of Scouting, and is worn at most events. The original uniform, which has created a familiar image in the public eye and had a very military appearance, consisted of a khaki button-up shirt, shorts, and a broad-brimmed campaign hat.

Uniforms have become much more functional and colorful since the beginning and are now frequently blue, orange, red, or green, and shorts are replaced by long trousers in areas where the culture calls for modesty, and in colder weather. T-shirts and other more casual wear have also replaced the more formal button-up uniforms in many Scouting regions.

To show the unity of all Scouts, the World Membership Badge (World Crest) or another badge with a fleur-de-lis is a part of all uniforms. Neckerchiefs and Woggles (slides) are still quite common, but some Scouting associations do not use them. Patches for leadership positions, ranks, special achievements, patrol- animals, colors or names, troop- or group- numbers or names, and country or regional affiliation are standard.