The County of Brabant (1085–1183) was a small medieval area of land located west of Brussels, between the Dender and Zenne rivers in the Low Countries, part of the Holy Roman Empire.

Before 1085 the land had belonged to Hermann II, Count Palatine of Lotharingia. Upon his death, Emperor Henry IV assigned this fief to Henry III, Count of Louvain (Leuven) and Count of Brussels, as the Landgraviate of Brabant. This is the earliest known use of the term Landgrave. 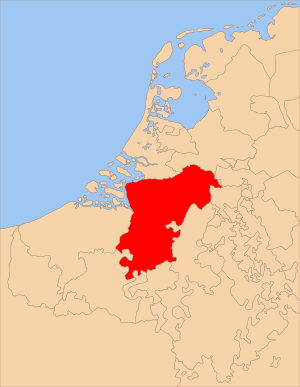 The Duchy of Brabant around 1350

In 1183 Frederick Barbarossa elevated the Landgrave, Henry I, to be Duke of Brabant; the lands of the Counts of Louvain and Brussels and of the Landgrave of Brabant were merged in the Duchy of Brabant.

The area made up part of South Brabant from 1815 to 1830 as part of the United Kingdom of the Netherlands, and part of the Belgian Province of Brabant from 1830 to 1996. It is currently in the western part of Flemish Brabant in the Flemish Region of Belgium.