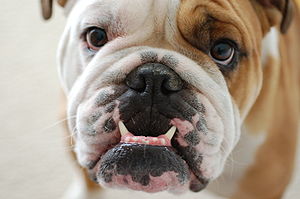 Brachycephalic syndrome is a pathological condition affecting short nosed dogs and cats which leads to severe respiratory distress. There are four different anatomical abnormalities that contribute to the disease, all of which occur more commonly in brachycephalic breeds: an elongated soft palate, stenotic nares, a hypoplastic trachea, and everted laryngeal saccules (a condition which occurs secondarily to the other abnormalities). Because all of these components make it more difficult to breathe, in situations of exercise, stress, or heat, an animal with these abnormalities may be unable to take deep or fast enough breaths to blow off carbon dioxide. This leads to distress and further increases respiratory rate and heart rate, creating a vicious circle that can quickly lead to a life-threatening situation.

Dogs experiencing a crisis situation due to brachycephalic syndrome typically benefit from oxygen, cool temperatures, sedatives, and in some cases more advance medical intervention including intubation. 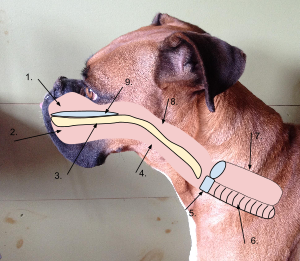 This diagram illustrates what the airway structure looks like in a brachycephalic dog; in this case, a Boxer. The brachycephalic dogs has a shorter snout which causes the airway to be shorter, that means all the parts that make up the airway get pushed closer together. Due to this phenomenon, a brachycephalic dog has an elongated soft palate which can cause most of the problems with the dogs breathing. They can also have problems getting enough air in because of their elongated soft palate and shorter airway. 1. Nasal Cavity 2. Oral Cavity3. Soft Palate 4. Pharynx 5. Larynx 6. Trachea7. Esophagus 8. Nasopharynx 9. Hard Palate

Symptoms progresses with age and typically becomes severe by 12 months.[3]

Despite observing clinical signs of airway obstructions, some owners of brachycephalic breeds may perceive them as normal for the breed, and may not seek veterinary intervention until a particularly severe attack happens. Some owners even perceive respiratory noises and snoring as cute.[4][5]

After awaking from surgery, most dogs that are intubated will try to claw out their tracheal tube. But brachycephalic dogs often seem quite happy to leave it in place as it gives them an open/bigger airway.[6]

x-ray on neck and bronchscopy

140px
120px
Stenotic nares in a Boxer before(left) and after (right) surgery.

To prevent or limit exacerbation of symptoms, avoid stress/heat. Maintain ideal body weight, avoid overfeeding. Use harnesses instead of collars to avoid pressure on trachea.

Brachycephalic dogs are more likely to die during air travel[7] and have been banned by many airlines.[8]

The risk of BS increases as the muzzle becomes shorter.[1] To avoid producing affected dogs, breeders may choose to breed for more moderate features rather than for extremely short or flat faces. Dogs with breathing difficulties, or at least those serious enough to require surgery, should not be used for breeding.[9] Removing all affected animals from the breeding pool may cause some breeds to be unsustainable and outcrossing to non-brachycephalic breeds might be necessary.[10] 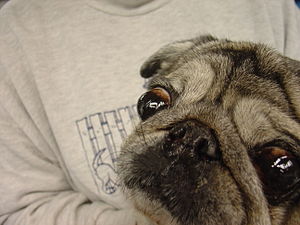 Exophthalmos in a pug 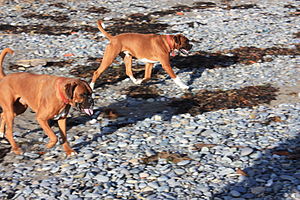 Breeds with less extreme brachycephalia, such as the Boxer, have less compromised thermoregulation and thus are more tolerant of vigorous exercise and heat.