From Infogalactic: the planetary knowledge core
Jump to: navigation, search
This article is about the jewelry item. For the botanical term indicating - having bracts, see Bract. 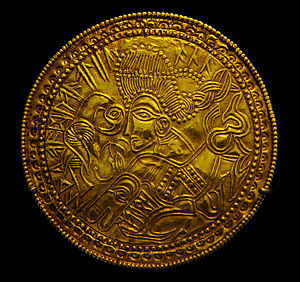 A bracteate (from the Latin bractea, a thin piece of metal) is a flat, thin, single-sided gold medal worn as jewelry that was produced in Northern Europe predominantly during the Migration Period of the Germanic Iron Age (including the Vendel era in Sweden). The term is also used for thin discs, especially in gold, to be sewn onto clothing in the ancient world, as found for example in the ancient Persian Oxus Treasure, and also later silver coins produced in central Europe during the early Middle Ages.

There are also similar pieces from the neighboring Huns (and from their invasion of India) in the style of Gupta and Roman coinage.

Gold bracteates from the Migration Period 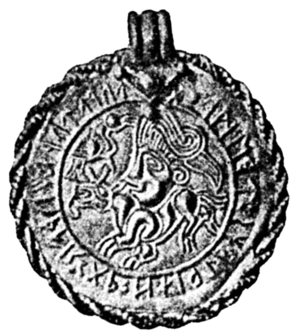 Gold bracteates commonly denote a certain type of jewelry, made mainly in the 5th to 7th century AD, represented by numerous gold specimens. Bead-rimmed and fitted with a loop, most were intended to be worn suspended by a string around the neck, supposedly as an amulet. The gold for the bracteates came from coins paid as peace money by the Roman Empire to their Northern Germanic neighbors.[1] 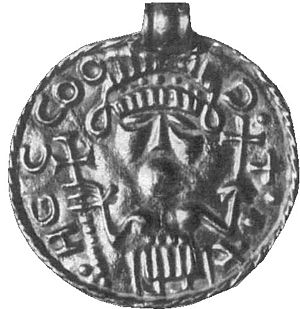 B-bracteate of the B7 or "Fürstenberg" type, found in Welschingen (IK 389), interpreted as depicting Frija-Frigg.

Many of the bracteates feature ruler portraits of Germanic kings with characteristic hair that is plaited back and depictions of figures from Germanic mythology influenced to varying extents by Roman coinage while others feature entirely new motifs. The motifs are commonly those of Germanic mythology and some are believed to be Germanic pagan icons giving protection or for divination.[1]

Often depicted is a figure with a horse, birds and sometimes a spear – that some scholars interpret as a representation of the Germanic god Wodan – and aspects of the figure that would later appear in 13th century depictions as Odin such as the Poetic Edda. For this reason the bracteates are a target of iconographic studies by scholars interested in Germanic religion. Several bracteates also feature runic alphabet inscriptions (a total of 133 inscriptions on bracteates are known, amounting to more than a third of the entire Elder Futhark corpus). Numerous Bracteates feature swastikas as a common motif.[1]

More than 1,000 Migration Period bracteates of type A-, B-, C-, D-, and F are known in total (Heizmann & Axboe 2011). Of these, 135 (ca. 11%) bear Elder Futhark inscriptions which are often very short; the most notable inscriptions are found on the Seeland-II-C (offering traveling protection to the one who wears it), Vadstena (giving a listing of the Elder Futhark combined with a potential magical inscription) and Tjurkö (featuring an inscription in scaldic verse) bracteates.

To these can be added the ca. 270 E-bracteates (Gaimster 1998), which belong to the Vendel Period and thus are slightly later than the other types. They were produced only on Gotland, and while the earlier bracteates (apart from a few English pieces) all were made from gold, many E-bracteates were made from silver or bronze.

The German historian Karl Hauck, Danish archaeologist Morten Axboe and German runologist Klaus Düwel have worked since the 1960s to create a complete corpus of the early Germanic bracteates from the migration period, complete with large scale photographs and drawings. This has been published in three volumes in German named Die Goldbrakteaten der Völkerwanderungszeit. Ikonographischer Katalog. A catalogue supplement is included in Heizmann & Axboe 2011.

Silver bracteates are different from the migration period bracteates and were the main type of coin minted in German-speaking areas, with the exception of the Rhineland, beginning at around 1130 in Saxony and Thuringia and were taken out of circulation at about 1520. In some cantons of Switzerland, bracteate-like rappen, heller, and angster were produced during the 18th century.

The term bracteate for these coins was not used contemporarily. It was first used in the 17th century.

The bracteates were usually called back regularly, about once or twice a year, and could be exchanged for new coins with a deduction (Renovatio Monetae). This system worked like a demurrage: People wouldn't hoard their coins, because they lost their value. So this money was used more as a medium of exchange than for storing value. This increased the velocity of money and stimulated the economy.

Medieval silver bracteates may be large, but most are about 15 millimeters across and weigh about 1 gram. Sometimes the coins could be divided to pay smaller amounts.

The town leagues were not interested in such a system and introduced in 1413 the Ewiger Pfennig (perpetual penny) without this decay.

These coins were made by the invading Hunnic tribes as they entered India, from 635 ad they seem to have issued gold coins to the weight of half a gram to one gram in the style of Gupta and Roman coinage.