Bracy Clark (1771 – 16 December 1860) was an English veterinary surgeon specialising in the horse.

He was the youngest son of John and Hannah Clark of Chipping Norton,[1] and was educated at the Quaker school of Thomas Huntley at Burford in Oxfordshire.[2] He was one of the first students enrolled at the newly established Veterinary College of London,[3] and studied under Charles Benoît Vial de Sainbel.[4] Sainbel died of unidentified fever in 1793 (later thought to be glanders); Clark disregarded the instructions to stay clear of the body, to produce a death mask.[5]

Clark made a continental tour around 1797, but wartime conditions meant he wasn't able to visit France. He was then in a London veterinary practice with William Moorcroft and Edmund Bond.[6] 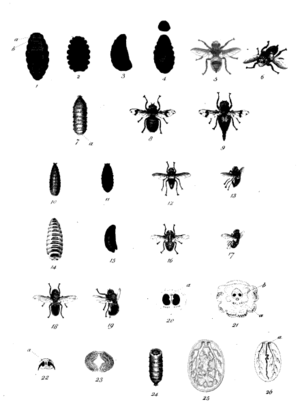 Plate of genus Oestrus, from a 1797 paper by Bracy Clark in the Transactions of the Linnean Society.[7]

Clark specialised in conditions of horses' hooves, and in 1806 patented a new pattern horse shoe;[8] he was then in practice at Giltspur Street, London.[9] He wrote extensively about the hoof in a series of pamphlets and books. In his work on the hoof Clark concluded that great damage was done by the shoeing practices of the time, but his views were ridiculed by his contemporaries.[10] In those opinions he was following, however, the teaching of Edward Coleman, Sainbel's successor.[11] His writings on laminitis and bridles have been noted by modern writers on barefoot horses[12][13] and the bitless bridle.[14]

An advertisement for his books,[15] published in 1835, records that he was a Fellow of the Linnean Society, Member of the Institut de France and Ecole de Médicine, and of the Royal Societies of Berlin, Frankfort, Copenhagen, and Stuttgart. He was made an Honorary Member of the Natural History Society of New York in 1817.[16] He lived at 7, Taunton Place, Regent's Park. Carl August Dohrn, investigating the fate of part of the Linnean Collection that passed to James Edward Smith, described Clark in 1851 as the last survivor of Smith's friends.[17] Illustrations from Bracy Clark, A Treatise on the Bits of Horses Chalinologia (1835).

He was listed as a contributor to Rees's Cyclopædia. Articles attributed to him include "Anatomy of the Horse", "Bits", "Bleeding", "Blindness" etc.[18]