Brad Garrett (born Brad H. Gerstenfeld;[1] April 14, 1960) is an American actor and stand-up comedian. He has appeared in numerous television and film roles.

Garrett was initially successful as a stand-up comedian in the early 1980s. Taking advantage of that success in the late 1980s, Garrett began appearing in television and film, in minor and guest roles. His first major role was Robert Barone on the CBS series Everybody Loves Raymond. The series debuted September 13, 1996 and ran for nine seasons.

Garrett has won three Primetime Emmy Awards, with three other nominations. He is still prominent within stand-up comedy and is also a professional poker player. Garrett is recognized for his imposing height and deep voice.

Garrett was born in Woodland Hills, California. Brad is the son of Barbara (née Colton), a homemaker, and Albert "Al" Gerstenfeld, a hearing aid salesman.[2] He is Jewish, but celebrates Christmas and Hanukkah;[3] Garrett has two older brothers, Jeff and Paul. He attended George Ellery Hale Middle School and graduated from El Camino Real High School, both in Woodland Hills. Brad Garrett attended UCLA for less than two months before dropping out to pursue his comedy career.

In one of his earliest public appearances, Garrett can be seen as the menacing palace guard on the back cover of the Electric Light Orchestra album Discovery released in 1979. In this, Garrett is seen dressed in middle-eastern traditional clothing, akin to that of the fictional character Aladdin, drawing his scimitar.[citation needed]

Garrett started out at various improv clubs in Los Angeles, including The Improv in Hollywood and The Ice House in Pasadena. In 1984, he became the first $100,000 grand champion winner in the comedy category of the TV show Star Search. This led to his first appearance, at age 23, on The Tonight Show Starring Johnny Carson, making him one of the youngest comedians ever to perform on the show. His appearance with Carson brought Garrett a lot of national attention, and soon he was appearing as an opening act for such headliners as Diana Ross and Liza Minnelli. He also opened in Las Vegas for Frank Sinatra, David Copperfield, Smokey Robinson, Sammy Davis, Jr., the Beach Boys, the Righteous Brothers and Julio Iglesias.

After achieving a strong measure of success with stand-up comedy, Garrett decided to change gears and try his luck with performing on TV. From 1985-1986, he was the voice of Hulk Hogan (in a voice similar to Rodney Dangerfield) for the cartoon series Hulk Hogan's Rock 'n Wrestling, He was featured on Family Feud during Ray Combs's tenure in a "Funny Men vs. Funny Women Week" during November sweeps. He also appeared for a week on the game show Super Password in 1987. He also appeared on Hollywood Squares including a memorable moment when he impersonated Bill Cosby during a question about Jell-o. He then appeared in the short-lived summer comedy First Impressions (CBS, 1988), in which he was a divorced father who makes a living doing impressions, in a one-time spot as a bank loan officer on Roseanne (ABC), and The Pursuit of Happiness (NBC, 1995–96), in which he was the hero's gay best friend. Though prior to these roles, Garrett had also had a minor part on Transformers, voicing the Decepticon base Trypticon in season three and as an ill-fated thug in Suicide Kings. He soon won the role of Ray Romano's brother Robert Barone on the long-running family-oriented comedy hit Everybody Loves Raymond. Garrett has also made an appearance on The Fresh Prince of Bel-Air playing a hitman who attempts to kill Will Smith's character. 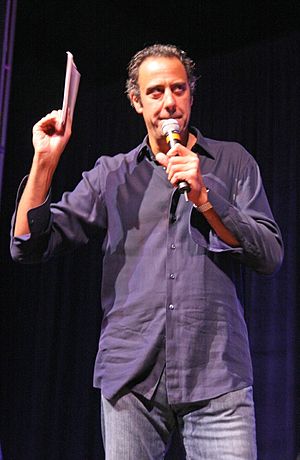 His role on Everybody Loves Raymond won him five Emmy Award nominations, and the 2002, 2003 and 2005 Emmy Awards for Outstanding Supporting Actor in a Comedy Series.

In 1990, Garrett appeared as a semi-regular panelist on the revival of Match Game. On the May 2, 1996 episode of the sitcom Seinfeld, called "The Bottle Deposit", Garrett played a deranged auto mechanic who steals Jerry Seinfeld's car.

In 2003, he was also nominated for the Emmy Award for Outstanding Lead Actor in a Miniseries or a Movie for Gleason. With his Raymond castmates, he won the 2003 Screen Actors Guild Award for Outstanding Performance by an Ensemble in a Comedy Series. He won the fifth season championship of Celebrity Poker Showdown, and played in the 2005, 2006 and 2007 World Series of Poker. Garrett was hoping to do a spin-off with his character Robert Barone from Everybody Loves Raymond when the show ended its nine-year run in 2005, but he withdrew in October 2005 due to inaction from CBS that led to a number of the writers from Raymond leaving and taking other jobs.

In 2005, Garrett appeared on Broadway playing Murray the Cop in the revival of Neil Simon's The Odd Couple with Nathan Lane and Matthew Broderick. He understudied Lane in the role of Oscar Madison, and substituted for him in January, 2006, during Mr. Lane's illness. In 2006, Fox network announced they would pick up a new sitcom called 'Til Death starring Garrett in the lead role. The plot revolves around a long married couple whose new next door neighbors are a pair of feisty newlyweds. Joely Fisher plays Garrett's wife in the series. He also appeared onstage on American Idol season six (2007) during judging on week 11, to which Ryan Seacrest said, "And the next person off American Idol is—Brad, you're out."

In the fall of 2008, Garrett starred in, and was the executive producer for, an online reality show called Dating Brad Garrett. In 2008, Garrett hosted a celebrity roast of Cheech & Chong, which was aired on TBS.

In 2009, Garrett entered the main event at the World Series of Poker, losing on the second day of the event. Garrett has starred in commercials for 7-Up, where he portrays a more happy, cheerful version of himself because of the soda.

In June 2010, he opened Brad Garrett's Comedy Club in the Tropicana Resort and Casino in Las Vegas, Nevada. In December 2010, he was one of the narrators during performances of the Candlelight Processional at Epcot.

In June 2011, I Kid with Brad Garrett, a candid kids show, premiered on TLC. On December 12, 2011, Garrett closed his club at the Tropicana. He is starting a new club with the same name across the street at MGM. 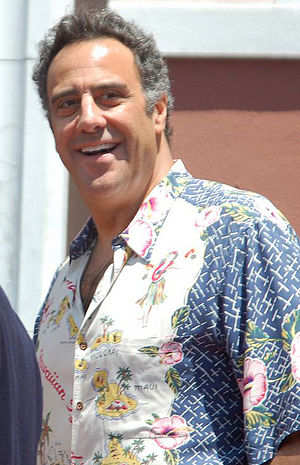 In 1998, Garrett proposed to his then-girlfriend, Jill Diven,[5] on the set of Everybody Loves Raymond, and they were married on May 18, 1999. Garrett is Jewish and Diven is Roman Catholic.[citation needed] Their first child Maxwell Bradley was born on in October 1998; their second child, daughter Hope Violet, was born in January 2000.[citation needed] Garrett and Diven separated in 2005, and Diven filed for divorce in July 2006.[6]

In 2007, Garrett struck a TMZ photographer's camera, which the photographer claimed hit him in the face.[8][9] The Los Angeles District Attorney declined to file assault charges against Garrett for the incident, because the DA felt Garrett was provoked in the incident.[10]

Garrett appeared on Are You Smarter Than a 5th Grader? and played for his charity, the Maximum Hope Foundation (named after his kids). He answered every single question correctly winning $25,000 and walked away with that after being asked to play for $250,000 with the bonus subject being U.S. History.