The Braddock expedition, also called Braddock's campaign or, more commonly, Braddock's Defeat, was a failed British military expedition which attempted to capture the French Fort Duquesne (modern-day downtown Pittsburgh) in the summer of 1755 during the French and Indian War. It was defeated at the Battle of the Monongahela on July 9, and the survivors retreated. The expedition takes its name from General Edward Braddock, who led the British forces and died in the effort. Braddock's defeat was a major setback for the British in the early stages of the war with France and has been described as one of the most disastrous defeats for the British in the 18th century.[3]

Braddock's expedition was part of a massive British offensive against the French in North America that summer. As commander-in-chief of the British Army in America, General Braddock led the main thrust against the Ohio Country with a column some 2,100 strong. His command consisted of two regular line regiments, the 44th and 48th with about 1,350 men, along with about 500 regular soldiers and militiamen from several British American colonies, and artillery and other support troops. With these men, Braddock expected to seize Fort Duquesne easily, and then push on to capture a series of French forts, eventually reaching Fort Niagara. George Washington, then just 23, knew the territory and served as a volunteer aide-de-camp to General Braddock.[7] Braddock's Chief of Scouts was Lieutenant John Fraser of the Virginia Regiment. Fraser owned land at Turtle Creek, had been at Fort Necessity, and had served as Second-in-Command at Fort Prince George (renamed Fort Duquesne by the French), at the confluence of the Allegheny and Monongahela Rivers.

Braddock mostly failed in his attempts to recruit Native American allies from those tribes not yet allied with the French; he had but eight Mingo Indians with him, serving as scouts. A number of Indians in the area, notably Delaware leader Shingas, remained neutral. Caught between two powerful European empires at war, the local Indians could not afford to be on the side of the loser. They would decide based on Braddock's success or failure. 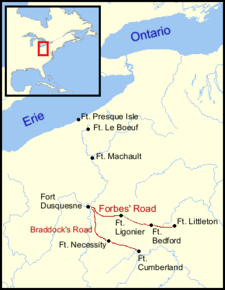 French and British forts in the region. The French forts were Fort Duquesne and the forts to the north.

Setting out from Fort Cumberland in Maryland on May 29, 1755, the expedition faced an enormous logistical challenge: moving a large body of men with equipment, provisions, and (most importantly for attacking the forts) heavy cannons, across the densely wooded Allegheny Mountains and into western Pennsylvania, a journey of about 110 miles (180 km). Braddock had received important assistance from Benjamin Franklin, who helped procure wagons and supplies for the expedition. Among the wagoners were two young men who would later become legends of American history: Daniel Boone and Daniel Morgan. Other members of the expedition included Ensign William Crawford and Charles Scott. Among the British were Thomas Gage; Charles Lee, future American president George Washington, and Horatio Gates.

The expedition progressed slowly because Braddock considered making a road to Fort Duquesne a priority in order to effectively supply the position he expected to capture and hold at the Forks of the Ohio, and because of a shortage of healthy draft animals. In some cases, the column was only able to progress at a rate of two miles (about 3 km) a day, creating Braddock's Road—an important legacy of the march—as they went. To speed up movement, Braddock split his men into a "flying column" of about 1,300 men which he commanded, and, lagging far behind, a supply column of 800 men with most of the baggage, commanded by Colonel Thomas Dunbar. They passed the ruins of Fort Necessity along the way, where the French and Canadians had defeated Washington the previous summer. Small French and Indian war bands skirmished with Braddock's men during the march. 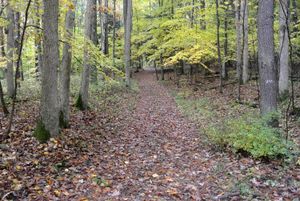 Meanwhile, at Fort Duquesne, the French garrison consisted of only about 250 regulars and Canadian militia, with about 640 Indian allies camped outside the fort. The Indians were from a variety of tribes long associated with the French, including Ottawas, Ojibwas, and Potawatomis. Claude-Pierre Pécaudy de Contrecœur, the Canadian commander, received reports from Indian scouting parties that the British were on their way to besiege the fort. He realised he could not withstand Braddock's cannon, and decided to launch a preemptive strike, an ambush of Braddock's army as he crossed the Monongahela River. The Indian allies were initially reluctant to attack such a large British force, but the French field commander Daniel Liénard de Beaujeu, who dressed himself in full war regalia complete with war paint, convinced them to follow his lead.

Battle of the Monongahela

Main article: Battle of the Monongahela 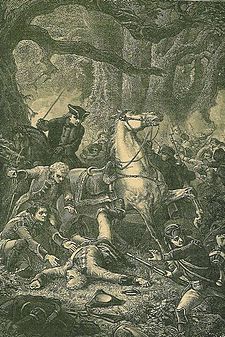 19th-century engraving of the wounding of Major-General Braddock at the Battle of the Monongahela.

By July 8, 1755, the Braddock force was on the land owned by the Chief Scout, Lieutenant John Fraser. That evening, the Indians sent a delegation to the British to request a conference. Braddock sent Washington and Fraser. The Indians asked the British to halt their advance so that they could attempt to negotiate a peaceful withdrawal by the French from Fort Duquesne. Both Washington and Fraser recommended this to Braddock but he demurred.

On July 9, 1755, Braddock's men crossed the Monongahela without opposition, about 10 miles (16 km) south of Fort Duquesne. The advance guard of 300 grenadiers and colonials with two cannon under Lieutenant Colonel Thomas Gage began to move ahead. George Washington tried to warn him of the flaws in his plan, for example, the French and the Indians fought differently than the open-field style they were using, and other things but his efforts were ignored. It would cost Braddock his life for not listening to young Washington. Then, unexpectedly came upon the French and Indians, who were hurrying to the river, behind schedule and too late to set an ambush.

In the skirmish that followed between Gage's soldiers and the French, the French commander, Beaujeu, was killed by the first volley of musket fire by the grenadiers. Although some 100 French Canadians fled back to the fort and the noise of the cannon held the Indians off, Beaujeu's death did not have a negative effect on French morale; Dumas rallied the rest of the French and their Indian allies. The battle, known as the Battle of the Monongahela, or the Battle of the Wilderness, or just Braddock's Defeat, was officially begun. Braddock's force was approximately 1,400 men. The British faced a French and Indian force estimated to number between 300 and 900. The battle, frequently described as an ambush, was actually a meeting engagement, where two forces clash at an unexpected time and place. The quick and effective response of the French and Indians — despite the early loss of their commander — led many of Braddock's men to believe they had been ambushed. However, French documents reveal that the French and Indian force was too late to prepare an ambush, and had been just as surprised as the British. 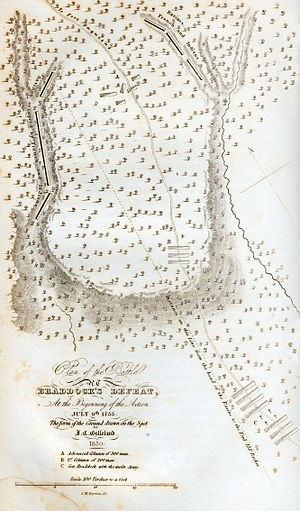 After an exchange of fire, Gage's advance group fell back. In the narrow confines of the road, they collided with the main body of Braddock's force, which had advanced rapidly when the shots were heard. The entire column dissolved in disorder as the Canadian militamen and Indians enveloped them and continued to snipe at the British flanks from the woods on the sides of the road. At this time, the French regulars began advancing from the road and began to push the British back.

Following Braddock's example, the officers kept trying to reform units into regular show order within the confines of the road, mostly in vain and simply providing targets for their concealed enemy. Cannon were used, but in such confines of the forest road, they were ineffective. The colonial militia accompanying the British took cover and returned fire. In the confusion, some of the militiamen who were fighting from the woods were mistaken for the enemy and fired upon by the British regulars.

After several hours of intense combat, Braddock was shot off his horse, and effective resistance collapsed. Colonel Washington, although he had no official position in the chain of command, was able to impose and maintain some order and formed a rear guard, which allowed the remants of the force to disengage. This earned him the sobriquet Hero of the Monongahela, by which he was toasted, and established his fame for some time to come.

"We marched to that place, without any considerable loss, having only now and then a straggler picked up by the French and scouting Indians. When we came there, we were attacked by a party of French and Indians, whose number, I am persuaded, did not exceed three hundred men; while ours consisted of about one thousand three hundred well-armed troops, chiefly regular soldiers, who were struck with such a panic that they behaved with more cowardice than it is possible to conceive. The officers behaved gallantly, in order to encourage their men, for which they suffered greatly, there being near sixty killed and wounded; a large proportion of the number we had."[8] 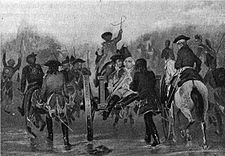 The mortally wounded Braddock retreating with his troops.

By sunset, the surviving British and colonial forces were fleeing back down the road they had built. Braddock died of his wounds during the long retreat, on July 13, and is buried within the Fort Necessity parklands.

Of the approximately 1,300 men Braddock had led into battle, 456 were killed and 422 wounded. Commissioned officers were prime targets and suffered greatly: out of 86 officers, 26 were killed and 37 wounded. Of the 50 or so women that accompanied the British column as maids and cooks, only 4 survived. The French and Canadians reported 8 killed and 4 wounded; their Indian allies lost 15 killed and 12 wounded.

Colonel Dunbar, with the reserves and rear supply units, took command when the survivors reached his position. He ordered the destruction of supplies and cannon before withdrawing, burning about 150 wagons on the spot. Ironically, at this point the defeated, demoralized and disorganised British forces still outnumbered their opponents. The French and Indians did not pursue and were engaged with looting and scalping. The French commander Dumas realized the British were utterly defeated, but he did not have enough of a force to continue organized pursuit.

Braddock's tactics are still debated. One school of thought holds that Braddock's reliance on time-honoured European methods, where men stand shoulder-to-shoulder in the open and fire mass volleys in unison, was not appropriate for frontier fighting and cost Braddock the battle. Skirmish tactics that American colonials had learned from frontier fighting, where men take cover and fire individually, "Indian style", was the superior method in the American environment.[9]

However, in some studies, the interpretation of "Indian style" superiority has been argued to be a myth by several military historians. European regular armies already employed irregular forces of their own and had extensive theories of how to use and counter guerilla warfare. Stephen Brumwell argues just the opposite, stating that contemporaries of Braddock, like John Forbes and Henry Bouquet, recognized that "war in the forests of America was a very different business from war in Europe."[10] Peter Russell argues it was Braddock's failure to rely on the time-honoured European methods that cost him the battle.[11] The British had already waged war on the irregular forces in the Jacobite uprisings. And East-European irregulars, such as Pandours and Hussars, had already made an impact on European warfare and theory by the 1740s. Braddock's failure, according to proponents of this theory, was that he did not adequately apply traditional military doctrine (particularly by not using distance), not the lack of use of frontier tactics.[12] Russell, in his study, shows that on several occasions before the battle, Braddock successfully adhered to standard European tactics to counter ambushes, and as a result had been nearly immune to earlier French and Canadian attacks.