From Infogalactic: the planetary knowledge core
Jump to: navigation, search
Not to be confused with Bradford, Pennsylvania.

Bradford County is a county located in the U.S. state of Pennsylvania. As of the 2010 census, the population was 62,622.[2] Its county seat is Towanda.[3] The county was created on February 21, 1810, from parts of Lycoming and Luzerne counties. Originally called Ontario County, it was reorganized and separated from Lycoming County on October 13, 1812, and renamed Bradford County for William Bradford, who had been a chief justice of the Pennsylvania Supreme Court and United States Attorney General.[4][5]

The county is not to be confused with the city of Bradford, which is in McKean County, 141 miles to the west via U.S. Route 6.

As noted above, Bradford County was originally named Ontario County. The county was reorganized and renamed in 1812. However, a section of north Philadelphia in which major east-west streets are named after Pennsylvania counties retains an Ontario Street, between Westmoreland and Tioga Streets. There are two short Bradford Streets in northeast Philadelphia, approximately four miles from Ontario Street. 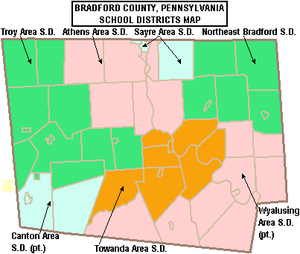 Data from EdNA database maintained by Pennsylvania Department of Education 2012

There is one Pennsylvania state park in Bradford County. 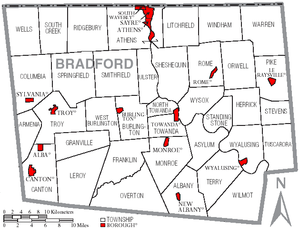 Under Pennsylvania law, there are four types of incorporated municipalities: cities, boroughs, townships, and, in only one case (Bloomsburg, Columbia County), towns. The following boroughs and townships are located in Bradford County:

The population ranking of the following table is based on the 2010 census of Bradford County.[15]