Red Clay State Park, the site of the last Cherokee council before the tribe's removal via Trail of Tears, is located in Bradley County.

Like many East Tennessee counties, Bradley County was largely opposed to secession on the eve of the Civil War. In Tennessee's Ordinance of Secession referendum on June 8, 1861, the county's residents voted against secession by a margin of 1,382 to 507.[4] The bridge over the Hiwassee River was burned on November 8, 1861, by members of the East Tennessee bridge-burning conspiracy led by Alfred Cate.[5] 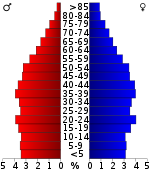 Bradley County has a 14-member county commission, with two commissioners from each of seven districts. The county executive (or "County Mayor"), separately elected, is Republican D. Gary Davis.

Bradley County is considered one of the most heavily Republican counties in traditionally Republican East Tennessee. Virtually all local and state office holders in and from Bradley County are Republicans. On the federal level Bradley County has not voted for a Democratic President since Franklin Delano Roosevelt in the landslide 1936 Presidential election.

SkyRidge Medical Center, formed from the buyout of Bradley Memorial Hospital and Cleveland Community Hospital, are the two hospitals in Bradley County.[14]

Interstate 75 traverses the county from the southwest to the north, passing through the western edge of Cleveland. There are four exits on I-75 in Bradley County: three in Cleveland and one in Charleston. U.S. Route 11 and U.S. Route 64 intersect in downtown Cleveland. U.S. 11 connects to Chattanooga to the southwest and Athens to the north. U.S. 64 connects to Murphy, North Carolina to the east. S.R. 60 connects Cleveland to Dayton to the northwest and Dalton, Georgia to the south. APD-40, made up of the U.S. 64 Bypass and a section of S.R. 60 forms a beltway and bypass route around the business district of Cleveland. The U.S. 11 Bypass bypasses downtown Cleveland to the west.