Braille Without Borders (BWB) is an international organisation for the blind in developing countries. It was founded in Lhasa, Tibet by Sabriye Tenberken and Paul Kronenberg in 1998. 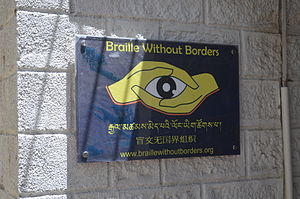 Formerly known as the Project for the Blind, Tibet in September 2002 the project adopted the name Braille Without Borders.

In 2004, Paul and Sabriye and a team of their blind students from Lhasa embarked upon the Climbing Blind expedition in Tibet under the leadership of blind Everest mountaineer Erik Weihenmayer. The prize-winning documentary Blindsight about this expedition was released worldwide to cinemas in 2006.