Brains is a commune in the Loire-Atlantique department in the Pays de la Loire region in France. The commune is a part of historical Brittany, in the traditional region of Retz, and in the historical region of Nantes.

Jules Verne visited Brains many times, at La Guerche, the house of his uncle, and at Le Plessis. 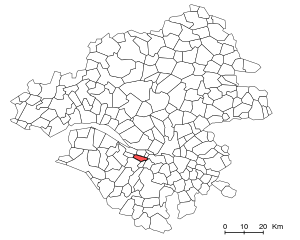 Location of the commune of Brains in the Loire-Atlantique department

According to the classification established by INSEE in 1999, Brains is a monocentric rural commune which is a part of the urban area of Nantes and the urban space of Nantes-Saint-Nazaire (cf. Communes of the Loire-Atlantique department)

The commune is bordered on the southwest by the Acheneau river.

The Gaulish root Nemus Brenno (forest of Brenno) is mentioned in a document of the cartulary of Buzay around 1179.

Most of the territory of the commune, covered by a vast forest, belonged during the Ancien Régime to the Dukes of Brittany. Settlements in the area gave birth to a number of lordships with some measure of authority: Jasson, Le Plessis, Le Pesle, Lorière, La Sauvagerie, La Pilaudière and La Guerche. The lordship of Le Pesle, the most important, was originally an appanage of Briord. Today a private residence, it overlooks the Acheneau on the Cour du Pesle.

The château of Le Plessis was the property of Pierre-Suzanne Lucas de La Championnière, lieutenant of François de Charette during the War in the Vendée from 1793-1796.

The château of La Guerche was dependent on Le Psle until the 17th century. Jules Verne was welcomed there by his uncle Prudent Allotte de la Fuye, owner from 1828 à 1837, during his summer vacations. He wrote some impromptu poetry there.

The rectory was sold as national property during the Revolution, and is now "l'espace des Clos Mâts", a cultural site with a library and music.

At the end of the 19th century, there were six windmills, of which only those of Charbonnières, Le Breuil, La Fouelle, and La Roche du Gré now survive.

The Napoleonic cadastre denoted a rural territory dotted by villages which are still visible today.

Port Hamoneau, witness to the economic importance of the Acheneau until 1914 for the export of wine and red sand to Nantes, témoin du rôle économique de l'Acheneau jusqu'en 1914 pour l'acheminement du vin et du sable rouge vers Nantes, now welcomes hikers and anglers who come to enjoy the peace and quiet of the surrounding marshes, in the shade of the poplar trees.

Brains is serviced by the number 88 Semitan bus, linking the town to the terminus (Neustrie) of Line 3 of the Nantes Tramway.

The population of the commune is relatively young. The percentage of people older than 60 (11.8%) is less than the national average (22.1%) and the departmental average (20.4%)

Unlike the national and departmental averages, the male population of the commune is higher than the female (50.4%, versus 48.4% nationally and 48.5% departmentally).

The population distribution of the commune by age, in 2008, was: