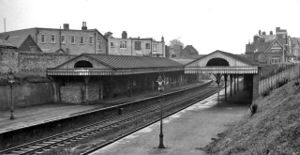 The London and South Western Railway (LSWR) opened their line from Southampton to Weymouth in January 1857, but the station was not opened until 1893 when it was the site of a junction with the Somerset and Dorset Joint Railway line whose trains to Bath started and finished at a terminus station, Bournemouth West. The S&DJR opened a locomotive depot at the station in 1895 which operated until closure of the line into Bournemouth West in 1965, after which the S&D trains ran, for the remaining few months of operation, into Bournemouth Central railway station, which had its own locomotive shed.

The line between Bournemouth and Weymouth was electrified in 1988 using the standard British Rail Southern Region system of a third rail with 750 Volts direct current.

The station is able to accommodate trains of up to five coaches, longer trains only open the doors in the first four or five coaches depending on the type of unit operating the service.

To the east of the station is the junction leading to Bournemouth Train Care Depot, built on part of the site of Bournemouth West station. Trains can often be seen arriving on platform 2 and then reversing into the depot.

On Mondays to Saturdays the station generally sees 2 trains per hour to Poole and London Waterloo and an hourly service to Weymouth.