From Infogalactic: the planetary knowledge core
Jump to: navigation, search
For the musical group, see The Brass Ring. 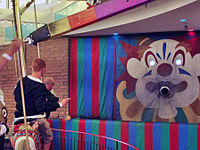 Brass Ring dispenser and target on Santa Cruz Beach Boardwalk's Looff Carousel in Santa Cruz, California The dispenser is visible as an arm crossing to the upper left, where a rider is grabbing the ring

A brass ring is a small grabbable ring that a dispenser presents to a carousel rider during the course of a ride. Usually there are a large number of iron rings and one brass one, or just a few. It takes some dexterity to grab a ring from the dispenser as the carousel rotates. The iron rings can be tossed at a target as an amusement. Typically, getting the brass ring gets the rider some sort of prize when presented to the operator. The prize often is a free repeat ride. The phrase to grab the brass ring is derived from this device. 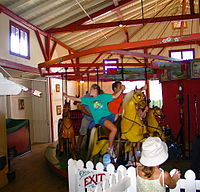 A rider of the Flying Horses Carousel carousel reaches for the brass ring.

Brass ring devices were developed during the heyday of the carousel in the U.S.—about 1880 to 1921. At one time, the riders on the outside row of horses were often given a little challenge, perhaps as a way to draw interest or build excitement, more often as an enticement to sit on the outside row of horses which frequently did not move up and down and were therefore less enticing by themselves. Most rings were iron, but one or two per ride were made of brass; if a rider managed to grab a brass ring, it could be redeemed for a free ride. References to a literal brass ring go back into the 1890s.[2]

As the carousel began to turn, rings were fed to one end of a wooden arm that was suspended above the riders. Riders hoped that the timing of the carousel rotation (and the rise-and-fall motion of their seat, when movable seats were included in the outer circle of the carousel) would place them within reach of the dispenser when a ring (and preferably a brass ring) was available.

Another system had mostly steel rings of no value and one brass ring, and a target into which the rings were to be thrown (for example the Santa Cruz Beach Boardwalk Looff Carousel uses a clown target shown in the photo above, and the Knoebel's Amusement Resort Grand Carousel uses a lion target),[3] discouraging retention of the rings as souvenirs.

"Grabbing the brass ring" or getting a "shot at the brass ring" also means striving for the highest prize, or living life to the fullest. It is not clear when the phrase came into wide use but has been found in dictionaries as far back as the late 19th century.[4][5]

The term has been used as the title of at least two books.[6][7]

The Barenaked Ladies song "Get Back Up" references "getting fitted for a new brass ring," in reference to continuing to strive for success.

Although there are a lot of carousels extant, only a handful of carousels still have brass rings. The following pre-1960 vintage carousels in North America have operating brass ring dispensers/targets:[8]

Update: Nunley's, formerly in Baldwin, N.Y., is out of business; its classic carousel is now running at Museum Row, above. Bushkill Park, Easton, Pa., has been put out of business by floods. The B&B Carousell on Coney Island is now city-owned in a new location and is not running rings. The Angola, Ind., park seems to be defunct. The Auburndale, Fla., carousel, owned by the Wintersteen family, was up for sale in 2008 and is closed.