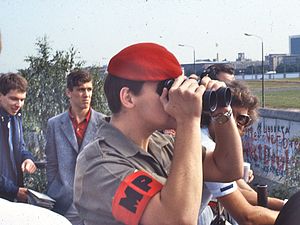 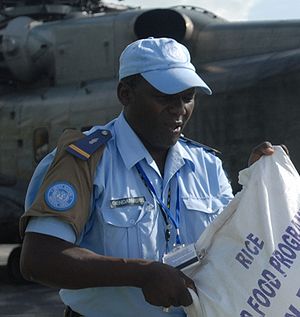 A Haitian policeman with a UN brassard, 2008

A brassard or armlet is an armband or piece of cloth or other material worn around the upper arm; the term typically refers to an item of uniform worn as part of military uniform or by police or other uniformed persons. Unit, role or rank badges or other insignia are carried on it instead of being stitched into the actual clothing. The brassard, when spread out, may be roughly rectangular in shape, where it is worn merely around the arm; it may also be a roughly triangular shape, in which case the brassard is also attached to a shoulder strap. The term is originally French, deriving from bras meaning "arm".

Brassards are also used with the uniforms of organizations which are not military but which are influenced by and styled upon the military, such as police, emergency services, volunteer services, or militaristic societies and political parties.

A brassard is often used:

Brassard (also "brassart" or "brasset") is also used to refer to pieces of armour worn to cover the entire arm (encompassing vambrace, rerebrace, and possibly a couter).