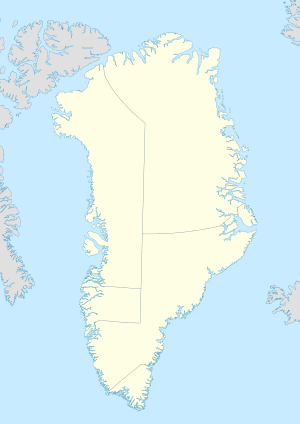 Brattahlíð, often anglicised as Brattahlid, was Erik the Red's estate in the Eastern Settlement Viking colony he established in south-western Greenland toward the end of the 10th century. The present settlement of Qassiarsuk, approximately 5 km (3.1 mi) southwest from the Narsarsuaq settlement, is now located in its place. The site is located about 96 km (60 mi) from the ocean, at the head of the Tunulliarfik Fjord, and hence sheltered from ocean storms. Erik and his descendants lived there until late in the 15th century. The name Brattahlíð means "the steep slope".

At Brattahlíð stood probably the first church in the New World: Þjóðhildarkirkja (Thjodhild's church, actually a small chapel). A recent reconstruction of this chapel now stands at a distance from the actual site, along with a replica of a Norse longhouse.

At the site of the main church, built after the Norse were converted to Christianity, investigators have found melted fragments of bell-metal, and foundation stones of it and other buildings remained into the 20th century, as did the remnants of a possible forge. This church (not Thjodhild's chapel) measured 12.5 by 4.5 m. and had two entrances, with what was evidently a hearth in the middle. Apparently, fire destroyed it. The church, possibly a 14th-century structure, may have stood on the ruins of an earlier church. The churchyard has tombstones, with a cross cut on one of them. On another stand engraved the runes for "Ingibjørg's Grave". Today[update], stones clearly mark the church's outline, though people probably placed them there in recent years; visitors can also see the surrounding graveyard.

One farm building nearby measured 53 by 14 m, with stone walls about 1.5 m thick; a turf outer bank provided further insulation. Inside, it had a flagstone floor. Flat stones — or, in one case, the shoulder-blade of a whale — formed the stalls. Some of these buildings still stood in 1953, contemporaneous with the Bluie West One airfield at Narsarsuaq, but today they exist mostly as depressions in the ground.

Brattahlíð still has some of the very best farmland in Greenland, owing to its location at the inner end of Eriksfjord, which protects it from the cold foggy weather and arctic waters of the outer coast. It has a youth hostel and a small store. More extensive facilities exist in Narsarsuaq across the fjord.

Brattahlíð hosted the first Greenlandic Þing (parliament), based on the Icelandic Althing. Its exact location remains unknown. The disappearance of the Norse settlements toward the end of the 15th century continues to mystify historians, but probably resulted from a combination of the Little Ice Age's cooling temperatures, soil erosion, abandonment by Norway, more convenient ways for Europeans to procure furs and a mercantile eclipsing by the Hanseatic League, and competition from the Inuit moving southward.

"An Old Captivity" (1940) by Nevil Shute (Norway) is a fictional account of an early aerial investigation of the old Norse settlement at Brattalid and of Lief Ericson's journey to North America in c 1000 AD.