Braughing /ˈbræfɪŋ/ is a village and civil parish, between the rivers Quin and Rib, in the non-metropolitan district of East Hertfordshire, part of the English county of Hertfordshire, England. Braughing was a rural district in Hertfordshire from 1935 to 1974.[1] 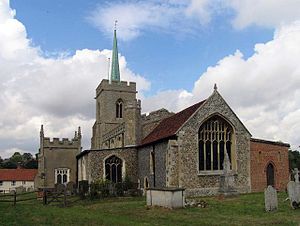 There is some evidence of human activity in the Mesolithic, Neolithic and Bronze Age, but settled habitation began in the Iron Age, around the 3rd century BC. It was probably a trading post, situated on the navigable extreme of the Rib, providing a route to the larger River Lea. In the late pre-Roman period it may have been the capital of the Trinovantes and the seat of such kings as Addedomarus and Tasciovanus.

At Ford Bridge, near Braughing there was a significant town in Roman times, situated close to several major Roman roads, including Ermine Street (now the A10), Stane Street (now the A120) and the Icknield Way, and covering at least 36 hectares. The town was a Roman industrial centre for the manufacture of pottery. When the River Rib is in full flood, bricks, tiles and other more interesting artefacts from the Roman settlement are washed from its banks.[2]

The Latin name of the town is, as yet, unknown.

After the Roman period it was settled by the Anglo-Saxons: the earliest form of the name Braughing is Breahinga, Old English for the people of Breahha, who was probably a local leader. It is mentioned in the Domesday Book (1086) at Brachinges.

Little remains of this hamlet, which lies to the east of the B1368 close to the Puckeridge junction. Originally part of Westmill parish, Gatesbury is now firmly within the parish of Braughing. Its name originates from the Gatesbury family, who held the manor from the late 12th century up to the 15th century, when it was passed to the FitzHerberts.

The village is famous for the Braughing Pork Sausage first made in 1954 by Douglas White and his wife Anna. The recipe has remained the same and the sausages are still made using the original recipe.[3] Local sausages are also served in the village's pubs, where they are reputedly delicious.[4]

On 2 October 1571,[5] as the funeral bell was being tolled, the coffin of a local farmer, Matthew Wall, was being carried down Fleece Lane towards the village Church of St Mary the Virgin.

Matthew's fiancée and other mourners were deeply distressed. He was only a young man. As they made their way to the funeral service, one of pallbearers slipped on the damp autumn leaves and they dropped the coffin - waking young Matthew. Confused and wondering wherever he was, he began frantically hitting the inside of the wooden case with his fist. The mourners removed the lid and were overjoyed to find him alive and well.

Matthew had possibly been in a coma after suffering from what is believed to be a form of epilepsy. A year after this strange event he married his beautiful fiancée and lived many more years. When eventually he did die in 1595, his will made financial provision for Fleece Lane to be swept each year, after which the funeral bell, and then a wedding peal, were to be rung. The money, invested in Braughing Parish Charities also paid for his grave to be pegged with brambles to prevent grazing sheep from damaging it.

The 2 October is still known as Old Man's Day. The tradition continues and schoolchildren now sweep the leaves from the lane, the bells are rung, and a short service is held at Matthew Wall's graveside.[6]

At one time there was a station on the ex-GER St Margaret's - Buntingford branch which closed in 1964.