The Brayton cycle is a thermodynamic cycle that describes the workings of a constant pressure heat engine. The original Brayton engines used piston-compressor and expander systems, but more modern gas turbine engines and airbreathing jet engines also follow the Brayton cycle. Although the cycle is usually run as an open system (and indeed must be run as such if internal combustion is used), it is conventionally assumed for the purposes of thermodynamic analysis that the exhaust gases are reused in the intake, enabling analysis as a closed system.

The engine cycle is named after George Brayton (1830–1892), the American engineer who developed it originally for use in piston engines , although it was originally proposed and patented by Englishman John Barber in 1791.[1] It is also sometimes known as the Joule cycle. The Ericsson cycle is similar to the Brayton cycle but uses external heat and incorporates the use of a regenerator. There are two types of Brayton cycles, open to the atmosphere and using internal combustion chamber or closed and using a heat exchanger. 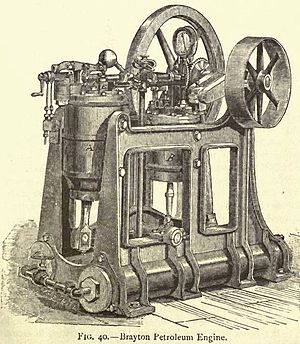 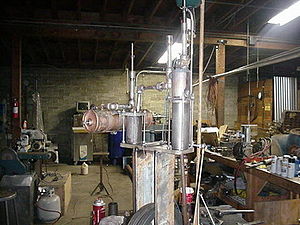 A Brayton cycle piston engine made from historical documents

In 1872, George Brayton applied for a patent for his "Ready Motor," a reciprocating constant pressure engine. The engine used a separate piston compressor and expander, with compressed air heated by internal fire as it entered the expander cylinder. The first versions of the Brayton engine mixed vaporized fuel with air as it entered the compressor by means of a heated-surface carburetor.,[2] The fuel / air was contained in a reservoir / tank and then it was admitted to the expansion cylinder and burned. As the fuel / air mixture entered the expansion cylinder it was ignited by a pilot flame. A screen was used to prevent the fire from entering / returning to the reservoir. In early versions of the engine, this screen sometimes failed and an explosion would occur, but in 1874 Brayton solved the explosion problem by adding the fuel just prior to the expander cylinder. The engine now used heavier fuels such as kerosine and fuel oil. Ignition remained pilot flame.[3] Brayton produced and sold "Ready Motors" to perform a variety of tasks like water pumping, mill operation, even marine propulsion. Critics of the day claimed the engines ran smoothly and had an efficiency of about 17%.[4] 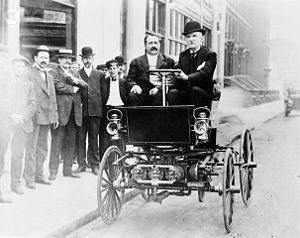 George B Selden driving a Brayton powered automobile in 1905

In 1878, George B. Selden produced the first internal combustion automobile. Inspired by the internal combustion engine invented by George Brayton displayed at the Centennial Exposition in Philadelphia in 1876, Selden began working on a smaller lighter version, succeeding by 1878, some eight years before the public introduction of the Benz Patent Motorwagen in Europe. The Selden auto was powered by a 3-cylinder, 400-pound version of the Brayton Cycle engine which featured an enclosed crankshaft. Selden designed and constructed the engine with the help of Rochester machinist Frank H. Clement and his assistant William Gomm. He filed for a patent on May 8, 1879 (in a historical cross of people, the witness Selden chose was a local bank-teller, George Eastman, later to become famous for the Kodak camera[6]). His application included not only the engine but its use in a 4 wheeled car. He then filed a series of amendments to his application which stretched out the legal process resulting in a delay of 16 years before the patent[7] was granted on November 5, 1895. Henry Ford fought the Selden patent. Ford argued his cars used the four-stroke Otto cycle and not the Brayton engine shown used in the Selden auto. Ford won the appeal of the original case.

In the original 19th-century Brayton engine, ambient air is drawn into a piston compressor, where it is compressed; ideally an isentropic process. The compressed air then runs through a mixing chamber where fuel is added, an isobaric process. The pressurized air and fuel mixture is then ignited in an expansion cylinder and energy is released, causing the heated air and combustion products to expand through a piston/cylinder; another ideally isentropic process. Some of the work extracted by the piston/cylinder is used to drive the compressor through a crankshaft arrangement.

The term Brayton cycle has more recently been given to the gas turbine engine. This also has three components:

Since neither the compression nor the expansion can be truly isentropic, losses through the compressor and the expander represent sources of inescapable working inefficiencies. In general, increasing the compression ratio is the most direct way to increase the overall power output of a Brayton system.[8]

The efficiency of the ideal Brayton cycle is 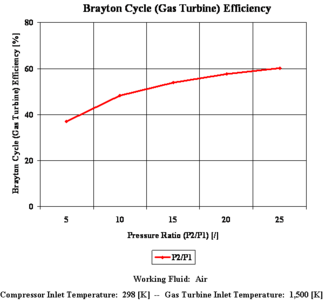 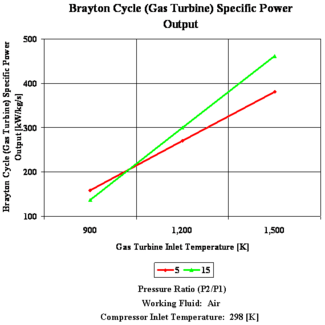 The highest temperature in the cycle occurs at the end of the combustion process, and it is limited by the maximum temperature that the turbine blades can withstand. This also limits the pressure ratios that can be used in the cycle. For a fixed turbine inlet temperature, the net work output per cycle increases with the pressure ratio (thus the thermal efficiency) and the net work output. With less work output per cycle, a larger mass flow rate (thus a larger system) is needed to maintain the same power output, which may not be economical. In most common designs, the pressure ratio of a gas turbine ranges from about 11 to 16.[10]

The power output of a Brayton engine can be improved in the following manners:

The efficiency of a Brayton engine can be improved in the following manners: 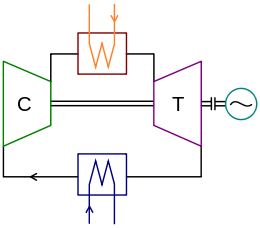 In 2002, a hybrid open solar Brayton cycle was operated for the first time consistently and effectively with relevant papers published, in the frame of the EU SOLGATE program.[13] The air was heated from 570 K to over 1000 K into the combustor chamber. Further hybridization was achieved during the EU Solhyco project running a hybridized Brayton cycle with solar energy and Biodiesel only.[14] This technology was scaled up to 4.6 MW within the project Solugas located near Seville where it is currently demonstrated at pre-commercial scale.[15]

A Brayton cycle that is driven in reverse, via net work input, and when air is the working fluid, is the air refrigeration cycle or Bell Coleman cycle. Its purpose is to move heat, rather than produce work. This air cooling technique is used widely in jet aircraft for air conditioning systems utilizing air tapped from the engine compressors.