The Breeders' Cup World Championships is an annual series of Grade I Thoroughbred horse races, operated by Breeders' Cup Limited, a company formed in 1982. From its inception in 1984 through 2006, it was a single-day event; starting in 2007, it expanded to two days. All sites have been in the United States, except in 1996, when the races were at the Woodbine Racetrack in Canada.

With the addition of three new races for 2008, a total of $25.5 million was awarded over the two days, up from $23 million in 2007. Each Breeders' Cup race awards to the winner a garland of flowers draped over the withers of the winning horse and four Breeders' Cup trophies presented to the connections of the winners.

The event was created as a year-end championship for North American Thoroughbred racing, and also attracts top horses from other parts of the world, especially Europe. The idea for the Breeders' Cup was proposed at the 1982 awards luncheon for the Kentucky Derby Festival by pet food heir John R. Gaines (1928–2005),[2] a leading Thoroughbred owner and breeder who wanted to clean up the sport's image. The Cup was initially faced with much skepticism in the racing community, however with the vocal support of legendary trainer John Nerud and others, the Breeders' Cup was carried out, and subsequently experienced tremendous popularity domestically and abroad.

The races are operated by Breeders' Cup Limited, a company formed in 1982. The first event was in 1984. From its inception in 1984 through 2006, it was a single-day event; starting in 2007, it expanded to two days. All sites have been in the United States, except in 1996, when the races were at the Woodbine Racetrack in Canada. 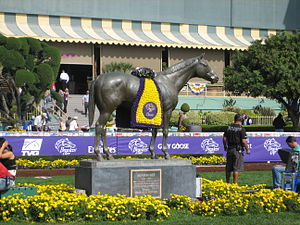 The saddling paddock, decorated for the Breeders' Cup

In 2006 Greg Avioli began serving as interim President and CEO of the Breeder's Cup,[3] and he became the official CEO in April 2007.[4] Stated Avioli at the time, the organization's core purpose was "to create an event of that stature and size that it will attract new racing fans and new buyers of racehorses."[5] For the October 2008 World Championships the event was expanded from one to two days, with the first day devoted to female horses and the overall purse increasing from $10 million to over $25 million, making it what the New York Post called "the richest turf festival in the world."[6] Before the Breeders' Cup expanded to two days, it was generally considered to be the richest day in sports. As of 2008, the second day of the Breeders' Cup is the second-richest. In 2008, a total of $17 million was awarded on that day, down from $20 million in 2007 (two races were moved from Day 2 to Day 1). The richest single day in sports is now another Thoroughbred racing event, Dubai World Cup Night. It features six races with a combined purse of $21 million in 2008. In 2008, the Breeders' Cup Marathon was added but was dropped in April 2014.[citation needed] It also introduced a new form of turf, instead of the traditional dirt.[6]

On October 22, 2009, the Breeder's Cup announced it had signed simulcasting and licensing agreements with Betfair,[8] a company which in turn had purchased the horse-racing network TVG in January of that year. The agreement brought in Betfair's customer base of over 2.5 million, many of whom had legal access to common-pool betting.[9] Betfair handled common-pool wagering at the organization's November 2009 championships, also streaming the events live to both national and international wagerers for the first time.[8] At that point, the World Championship event was being telecast in over 140 countries, through various networks.[8]

Breeder's Cup also introduced the "Win and You're In" playoff system, a policy wherein winners of major races throughout the year,[10] from England, Ireland, France, Hong Kong, Japan, South Africa, and Australia would gain automatic access to the Breeder's Cup Championships races. Profits for 2009[5] and 2010 were the highest in the organization's history, with wagering (both pari-mutuel and non-pari-mutuel) in 2010 nearing $200 million, or $21 million more than the previous year. Over $23 million of the non-pari-mutuel was wagered over Betfair.[11]

In 2011, the Juvenile Sprint was added but was dropped after the 2012 running.[12] Churchill Downs has hosted the race card eight times. It hosted the card most recently in 2011.[13]

The following is a partial list of races discontinued or sold by Breeder's Cup:

A maximum of 14 starters are allowed in each of the 14 Breeders' Cup Championships races with the exception of the Dirt Mile which will be limited to 12 starters. Breeders' Cup Limited has adopted a field selection system to select runners in the event fields are oversubscribed. This system ranks horses in order of preference based upon (1) performance in Breeders' Cup Challenge Races, (2) a point system, and (3) the judgment of a panel of racing experts. The field selection system will be implemented as necessary following the taking of pre-entries approximately two weeks before the Breeders' Cup (in 2012, this will take place on October 22) to officially rank the oversubscribed fields. The Racing Directors/Secretaries Panel (the "Panel") will rank all the horses pre-entered in the oversubscribed races as described below. After pre-entry, any vacancies in the fields will be filled by horses in order of panel preference.

Through 2006, there were eight races on the Breeders' Cup card, all classified as Grade I races. In 2007, three races – the Dirt Mile, Filly and Mare Sprint, and Juvenile Turf – were added, all of them run the Friday before the remaining eight races. Three more new races – a Turf Sprint, Juvenile Filly Turf and Marathon – were added for 2008.[17] A Juvenile Sprint was added for 2011. 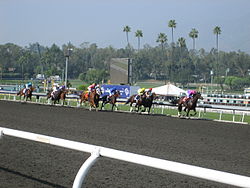 The championship races in 2009 (pictured) were the second year to have a day devoted to female horses. As of 2014 the gender on both days is mixed between races.

The order of the races on the card has changed many times throughout the event's history, but the Turf and Classic are traditionally the last two races (although this was not the case in 2012). The 2008 event was the first in which Day 1 of the event was dedicated to races for fillies and mares, with Day 2 featuring all other races. For 2009, the Marathon, open to runners of both sexes, was moved from Day 2 to be the opening race on Day 1, but all other races stayed on the day they had been run in 2008. In 2011, the Marathon was moved from Day 1 to Day 2, with the Juvenile Sprint becoming the first race overall (and also the only one on Day 1 open to males). The Marathon returned to Day 1 in 2012. For 2013, the first day was no longer primarily devoted to races for fillies and mares, with the Dirt Mile and Juvenile Turf moving to Day 1 and the Filly & Mare Sprint and Filly & Mare Turf moving to Day 2.

Two other significant changes were made in 2013. First, the Juvenile Sprint was discontinued after only two runnings. That race had been widely perceived as a consolation prize for horses not good enough to run in the Juvenile.[2] Second, the Ladies' Classic returned to its original name of Distaff. When the latter announcement was made, Breeders' Cup president Craig Fravel said,

We restored the Ladies' Classic to its original name due to feedback from our loyal fans who have a strong affinity for the Distaff. In recognition of our 30th year, the Distaff has provided us with some of racing's most remarkable moments, personified by such outstanding thoroughbreds as Lady's Secret, Personal Ensign, Azeri, Zenyatta, and our two-time defending champion, Royal Delta. It is a fitting tribute to bring back the name Distaff to honor the rich history of the championships.[2]

Most wins and earnings

The following horses have won the same Breeders' Cup race at least twice:

Women in the Breeders' Cup

The 1988 Breeders' Cup marked the first time a woman jockey competed, as American Julie Krone rode in three races that day; the Juvenile Fillies, the Juvenile and the Classic finishing 2nd, 6th and 4th respectively. Krone also became the first woman to win when she guided Halfbridled to a historic victory in the 2003 edition of the Juvenile Fillies. Rosie Napravnik became the second woman jockey to win a Breeders' Cup race, winning the Juvenile in 2012 on Shanghai Bobby. Six women trainers have won Breeders' Cup races, including Kathy Ritvo, who was the first woman to train a Classic winner, Mucho Macho Man, in 2013. Most recently, Maria Borell saddled 2015 Sprint winner Runhappy.

Past and Future Breeders' Cup sites: