From Infogalactic: the planetary knowledge core
Jump to: navigation, search
For the river, see Brembo (river).

Brembo S.p.A. is an Italian manufacturer of automotive brake systems, especially for high-performance cars and motorcycles based in Bergamo, near Milan. 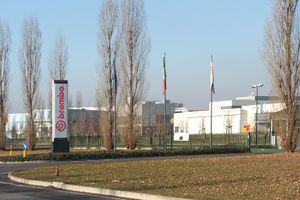 Brembo was established in Bergamo, Italy in 1961. Soon after the company was formed, it specialised in disc brakes, which were imported from the UK at the time. The company entered into a supply contract with Alfa Romeo in 1964. It became the supplier of brake components to Moto Guzzi in 1966.

In the 1980s, Brembo began supplying BMW, Chrysler, Ferrari, Mercedes-Benz, Nissan, and Porsche with brakes. The company went public on the Milan Stock Exchange in 1995.

Corporate headquarters are located in Bergamo, and the company has more than 6,000 employees within Italy and at branches in Brazil, China, Japan, Mexico, US, Poland, Spain, Sweden, and the UK.

An official press release on May 21, 2014 announced an €83 million expansion of the Michigan facility. On December 2, 2014, Brembo announced plans to invest €32 million into a 31,500 square meter production facility, which is projected to produce 2 million aluminum calipers yearly. The current expectation is initial operation beginning in 2016 and full operation by the end of 2018.[2]

Brembo's deputy chairman Matteo Tiraboschi reported on March 5, 2015 the company's 2014 sales growth of 15% up to €1.8 billion, and a net profit increase of 45% to €129.1 million. He also reported that possibilities for acquiring assets were being explored, with focus on the automotive and aviation sectors.[4]

Brembo specialises in performance braking systems and components, as well as conducting research on braking systems. Brembo sells over 1,300 products worldwide, and is known for their aftermarket automotive brake components, including calipers, drums, rotors, and brake lines. Except in the North American market, Brembo owns the foundries which produce their initial materials and supply the manufacturing plants. In all other markets the company controls the entire production system from raw materials through distribution. The company holds QS9000 and ISO 9001 certifications.

Brembo brakes are also used by a variety of Formula One teams including Ferrari, and brake supplier of the majority of MotoGP teams (Nissin brakes were in use by the Gresini squad in the 2014 season). Since 2012 season, Brembo is also an official brake supplier for IndyCar Series.