Brent Cross is an area of north London, in the London Borough of Barnet. It is located near the A41 Brent Cross Flyover over the A406 North Circular Road. Brent Cross is best known for its shopping centre and the proposed Brent Cross Cricklewood development. 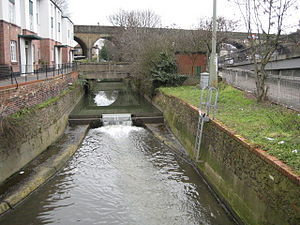 The River Brent at Brent Cross. The Ordnance Survey 1:50,000 scale mapping shows a sea of dark green here as the A406 North Circular Road and the A41 Hendon Way meet at the Brent Cross Flyover. A small weir impounds a head of water as the river flows down towards the Brent Reservoir.

Brent Cross is in the London Borough of Barnet and contains the Brent Cross Shopping Centre. The area takes its name from an old crossroads near the River Brent and is not in the London Borough of Brent (that local authority lies to the west of the nearby A5 Edgware Road). It has no specific boundaries but in general only premises west of the Brent Cross Flyover, east of the M1 motorway and close to the North Circular are described as being in Brent Cross. The River Brent passes through it, flowing from east to west in a man-made channel.

Previously the area had been known as Renters Farm, a name dating from 1309, and it remained largely farmland until the nineteenth century. In the late nineteenth century a sewage works was built there and Hendon Greyhound Stadium stood there from 1935 to 1972.[3] In 1976 the Brent Cross Shopping Centre was opened, the first stand-alone shopping centre to be built in the United Kingdom.

In the 1920s and 1930s, two major roads through the area were constructed, the east-west A406 North Circular Road and the north-south A41 Hendon Way. In 1923 the Northern line (Edgware branch) was extended on a short viaduct over the River Brent.

In 1964/65 the Brent Cross Flyover was built to carry the Hendon Way over the North Circular. During its construction on Saturday 20 June 1964 a fatal accident occurred while erecting a large crane at the site. The crane jib buckled and collapsed onto a coach travelling east on the North Circular Road killing seven passengers on board. A question was raised in parliament about the accident on 22 June.[4]

When Brent Cross Shopping Centre opened in 1976 it was the third shopping centre of its type in the UK after the Bullring in Birmingham (1964) and the Haymarket Shopping Centre in Leicester (1973).[6] It was initially constructed in a dumbbell shape running east-west parallel to the North Circular Road, with the two largest stores (John Lewis and Fenwicks) at the ends. It was expanded and renovated beginning in 1995, with additional shops and restaurants on an arm running north from the middle. A multi-storey car park replaced the remainder of the open parking area to the north.

Although it is smaller than more recent shopping centres such as the MetroCentre, Bluewater, Lakeside, Westfield London and St. David's Cardiff, it has one of the largest incomes per unit area of retail space in the UK.

The car park of the shopping centre was used as a filming location for the James Bond film Tomorrow Never Dies.[7]

On 6 November 2012, six people on three motorbikes entered the shopping centre and smashed in the windows at jewellers Fraser Hart. An estimated £2m worth of jewellery was stolen.[8]

Brent Cross Cricklewood is a planned new town centre development in Cricklewood. The development is planned to cost around £4.5 billion to construct and will include 7,500 homes, 4,000,000 sq ft (370,000 m2) of offices, four parks, transport improvements and a 592,000 sq ft (55,000 m2) extension of Brent Cross Shopping Centre.[9] The developers of the scheme are Hammerson and Standard Life.[10] Construction is planned to start in 2014 and to take around 20 years to complete.[10] 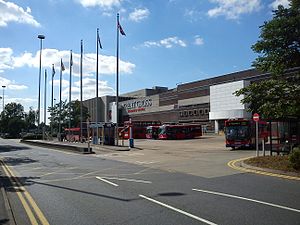 The London Underground stations nearest to the shopping centre are Brent Cross and Hendon Central, both on the Northern line. According to the council, both "feel very remote and lack adequate pedestrian links and signage", and the 10 to 15-minute walks are through "a hostile pedestrian environment.".[11][12]

Transport schemes have been proposed involving Brent Cross, as part of, or concurrent to, the Brent Cross Cricklewood development. These include