Brent Pelham is a village in Hertfordshire, England, and situated approximately 5 miles (8 km) east of Buntingford. It is one of the three Pelhams, with Stocking Pelham and Furneux Pelham, and forms part of the civil parish of Brent Pelham and Meesden.

The parish church of St Mary's dates from the 14th century. It contains a black marble tomb slab of the 13th century, upon which the name of legendary local dragon-slayer Piers Shonks and a date of 1086 has been added. Symbols of the Four Evangelists - angel, eagle, lion, and bull - have been carved in relief around a dragon's mouth.[1] The church is part of a benefice with Anstey, Hormead, Meesden and Wyddial.[2]

Near St Mary's church are ancient stocks which could accommodate up to three people. A derelict windmill survives in the village.

There is a Royal Observer Corp observer post just outside the village, but it is now in a state of disrepair. It has an Orlit, which is rare for posts in this area.[citation needed] 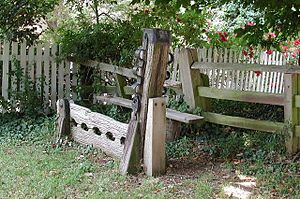