Greatly influenced by science fiction pioneer H. G. Wells, Aldiss was a vice-president of the international H. G. Wells Society. He was (with Harry Harrison) co-president of the Birmingham Science Fiction Group. Aldiss was named a Grand Master by the Science Fiction Writers of America in 2000 and inducted by the Science Fiction Hall of Fame in 2004. He received two Hugo Awards, one Nebula Award, and one John W. Campbell Memorial Award.[1] He wrote the short story "Super-Toys Last All Summer Long" (1969), the basis for the Stanley Kubrick-developed Steven Spielberg film A.I. Artificial Intelligence (2001). Aldiss was associated with the British New Wave of science fiction.[2]

Aldiss was born on 18 August 1925,[3] above his paternal grandfather's draper's shop in Dereham, Norfolk. When Aldiss' grandfather died, his father, Bill (the younger of two sons), sold his share in the shop and the family left Dereham. Aldiss' mother, Dot, was the daughter of a builder.[4] As a 3-year-old, Aldiss started to write stories which his mother would bind and put on a shelf.[5] At the age of 6, he was sent to board at West Buckland School in Devon and then to Framlingham College.[4] As a child he discovered the pulp magazine Astounding Science Fiction, and read all the novels by H. G. Wells and Robert Heinlein, and later Philip K. Dick.[6] In 1943, during the Second World War, he joined the Royal Signals[7] and saw action in Burma.[8]

His Army experience inspired the Horatio Stubbs second and third books, A Soldier Erect and A Rude Awakening, respectively.[9]

After the war, he worked as a bookseller in Oxford.[10] He also wrote a number of short pieces for a booksellers' trade journal about life in a fictitious bookshop, which attracted the attention of Charles Monteith, an editor at the publisher Faber and Faber. As a result, Faber and Faber published Aldiss' first book, The Brightfount Diaries (1955), a 200-page novel in diary form about the life of a sales assistant in a bookshop.

About this time he also began to write science fiction for various magazines. According to ISFDB, his first speculative fiction in print was the short story Criminal Record, published by John Carnell in the July 1954 issue of Science Fantasy.[11] Several of his stories appeared in 1955, including three in monthly issues of New Worlds,[11] a more important magazine also edited by Carnell.

In 1954, The Observer newspaper ran a competition for a short story set in the year 2500. Aldiss' story Not For An Age was ranked third following a reader vote.[12]

The Brightfount Diaries had been a minor success, and Faber asked Aldiss if he had any more writing they could look at with a view to publishing. Aldiss confessed to being a science fiction author, to the delight of the publishers, who had a number of science fiction fans in high places, and so his first science fiction book was published,[citation needed] a collection of short stories entitled Space, Time and Nathaniel (Faber, 1957). By this time, his earnings from writing matched his wages in the bookshop, and he made the decision to become a full-time writer.[citation needed]

Aldiss led the voting for Most Promising New Author of 1958 at the next year's World Science Fiction Convention, but finished behind "no award".[1] He was elected president of the British Science Fiction Association in 1960. He was the literary editor of the Oxford Mail newspaper from 1958 to 1969.[10] Around 1964, he and long-time collaborator Harry Harrison started the first ever journal of science fiction criticism, Science Fiction Horizons, which during its brief span of two issues published articles and reviews by such authors as James Blish, and featured a discussion among Aldiss, C. S. Lewis, and Kingsley Amis in the first issue[13] and an interview with William S. Burroughs in the second.[14]

Besides his own writings, he had great success as an anthologist. For Faber he edited Introducing SF, a collection of stories typifying various themes of science fiction, and Best Fantasy Stories. In 1961, he edited an anthology of reprinted short science fiction for the British paperback publisher Penguin Books under the title Penguin Science Fiction. This was remarkably successful, went into numerous reprints, and was followed up by two further anthologies: More Penguin Science Fiction (1963) and Yet More Penguin Science Fiction (1964). The later anthologies enjoyed the same success as the first, and all three were eventually published together as The Penguin Science Fiction Omnibus (1973), which also went into a number of reprints. In the 1970s, he produced several large collections of classic grand-scale science fiction, under the titles Space Opera (1974), Space Odysseys (1975), Galactic Empires (1976), Evil Earths (1976), and Perilous Planets (1978) which were quite successful.[citation needed] Around this time, he edited a large-format volume Science Fiction Art (1975), with selections of artwork from the magazines and pulps.

In response to the results from the planetary probes of the 1960s and 1970s, which showed that Venus was completely unlike the hot, tropical jungle usually depicted in science fiction, Aldiss and Harrison edited an anthology Farewell, Fantastic Venus!, reprinting stories based on the pre-probe ideas of Venus. He also edited, with Harrison, a series of anthologies The Year's Best Science Fiction (Nos. 1–9, 1968–1976).[15]

Aldiss invented a form of extremely short story called the mini-saga. The Daily Telegraph hosted a competition for the best mini-saga for several years, and Aldiss was the judge.[16] He has edited several anthologies of the best mini'sagas. 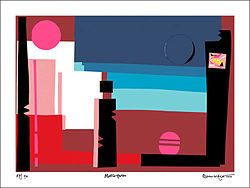 Aldiss travelled to Yugoslavia, where he met fans in Ljubljana, Slovenia and published a travel book about Yugoslavia entitled Cities and Stones (1966), his only work in the genre.[17] He published an alternative-history fantasy story, "The Day of the Doomed King" (1968), about Serbian kings in the Middle Ages, and wrote a novel called The Malacia Tapestry, about an alternative Dalmatia.

In addition to a highly successful career as a writer, Aldiss was an accomplished artist. His first solo exhibition, The Other Hemisphere, was held in Oxford, August–September 2010, and the exhibition's centrepiece Metropolis (see figure) has since been released as a limited edition fine art print.[18](The exhibition title denotes the writer/artist's notion, "words streaming from one side of his brain inspiring images in what he calls 'the other hemisphere'.")[18]

He was elected a Fellow of the Royal Society of Literature in 1990.[22]

Aldiss was the "Permanent Special Guest" at the annual International Conference on the Fantastic in the Arts (ICFA) from 1989 through 2008. He was also the Guest of Honor at the conventions in 1986 and 1999.[23]

He was awarded the title of Officer of the Order of the British Empire (OBE) for services to literature in the 2005 Birthday Honours list.[26]

In January 2007 he appeared on Desert Island Discs. His choice of record to 'save' was "Old Rivers" sung by Walter Brennan, his choice of book was John Heilpern's biography of John Osborne, and his luxury a banjo. The full selection of eight favourite records is on the BBC website.[27]

On 1 July 2008 he was awarded an honorary doctorate by the University of Liverpool in recognition of his contribution to literature.[28] The Brian W Aldiss Archive at the University holds manuscripts from the period 1943–1995.[29]

Aldiss sat on the Council of the Society of Authors.[30]