Brian Molko (born 10 December 1972) is a Scottish-Belgian musician, songwriter, lead vocalist, and guitarist of the band Placebo. He is known in particular for his distinctive nasal, high-pitched vocals, androgynous appearance, and unique guitar style and tuning.

Molko was born in Brussels, Belgium to an American father of French-Italian heritage[1] and a Scottish Catholic mother. Molko has only one older brother, 10 years his senior, named Stuart Molko.[2] Molko's family moved frequently during his childhood, growing up in Dundee, Liberia, Lebanon, and Belgium, where they eventually settled for quite a long time in the village of Longeau, just near to the border with Luxembourg, where the young Brian spent a lot of his childhood.[3] Brian Molko has referred to a period spent in his mother's home town of Dundee, Scotland, as "where I grew up".[4]

While Molko was brought up in a strict household that disapproved of artistic expression (his father wanted him to become a banker), he rebelled by assuming an androgynous image, wearing nail polish, lipstick, and eyeliner, and listening to punk music. Molko initially attended the European School of Luxembourg but had to leave due to excessive bullying;[5] he later attended the American International School of Luxembourg (AISL)[6] and went on to study drama at Goldsmiths College in London.[7] 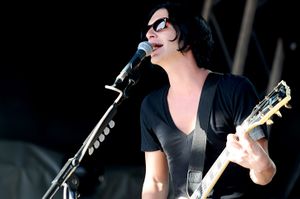 Molko and Stefan Olsdal had both attended AISL (though they were never friends);[8] when Molko moved to London, he ran into Olsdal at South Kensington tube station and invited him to one of his gigs in a club, which he played with Steve Hewitt in a group called Ashtray Heart.[8]

Along with Hewitt and Olsdal, he had a role in the 1998 film Velvet Goldmine,[9] for which Placebo performed the T. Rex song "20th Century Boy". He played Malcolms, a singer of the fictional glam rock band, The Flaming Creatures, who resembled the early Alice Cooper band.

Molko has been open about his use of recreational drugs; in a 1997 interview with New York Doll, he admitted at one point that heroin was "probably the only drug on this planet I haven't tried".[10] However, he later admitted to using heroin as well.[11] The band holds that the drug references within their music reflect the nature of current times, and the removal of such references would deteriorate the meaningfulness of their work.[12][13][14] In a 2010 interview Molko said that the band had stopped using drugs.[15]

In October 2005 Molko announced that his then-partner, photographer Helena Berg had given birth to a boy, Cody. In June 2009, he stated in an interview that he was a "single father."[16] Molko is openly bisexual.[17]

In December 2012, Molko received an Honorary Fellowship from Goldsmiths College, University of London.[18]

He has performed, as a guest vocalist and with other artists on Placebo's records, on tracks by:

He also wrote the English lyrics to "Pink Water 3", a song by Indochine from the album Alice & June, released in 2005.[citation needed] Molko is friends with David Bowie, with whom he sang on Placebo's "Without You I'm Nothing"[19] and the "20th Century Boy" cover live.

Molko uses a variety of guitars. In the Sleeping With Ghosts era, he used Gibson SGs ("The Bitter End", "Every You Every Me", "Plasticine", "Black-Eyed", "Without You I'm Nothing", "Special K", "Bulletproof Cupid", "Soulmates/Sleeping With Ghosts", "Special Needs", "This Picture"), Fender Jaguars ("Allergic", "Nancy Boy", "Bionic", "Centrefolds"), a Fender Thinline Telecaster ("Taste in Men"), a Fender Jazzmaster ("Pure Morning"), and a Fender Bass VI ("Slave to the Wage"). For amplification he used a Marshall 6100LM.[20]