Sir Brian Souter (born 5 May 1954) is a Scottish businessman and philanthropist. With his sister, Ann Gloag, he founded the Stagecoach Group of bus and rail operators. He also founded the bus and coach operator Megabus, the train operating company South West Trains, his investments company Souter Holdings Ltd and the Souter Charitable Trust.

Souter has also been politically active in Scotland, and supports the Scottish National Party financially. In 2000, when the Scottish Executive proposed to repeal Section 2A of the Local Government Act, which prevented local authorities from "promoting homosexuality", Souter started the Keep the Clause campaign to oppose their plans, spending one million pounds of his own money to organise a private referendum across Scotland. This campaign and other controversial statements have led opponents to accuse him of homophobia.

In 2011 he was awarded a knighthood for services to transport and the voluntary sector.[2] The honour was criticised by Scottish Labour Party politicians and by gay rights campaigners.

Souter was born in the Scottish town of Perth. His father was a bus driver and as a child Brian often travelled on bus routes with his father.[3] At school he developed an interest in economics and accounts, about which he later said, "Changing my timetable from maths to include economics and accounts was one of the best things I’ve ever done."[4]

On leaving school, he studied at the Abertay University to become a commerce teacher.[5] On completion he studied at Strathclyde University in Glasgow, where he graduated with a CA Diploma in Accountancy and Economics. Following his graduation Souter became a Chartered Accountant at Arthur Andersen & Co.

Using his father's redundancy money, with his sister Ann Gloag and his brother-in-law Robin Gloag he established the Stagecoach Group in 1980, running buses from Dundee to London.[6] Expansion continued, and in the early 1990s Stagecoach acquired National Bus Company subsidiaries in Cumberland and Hampshire, and the East Midlands, Ribble, Southdown and United Counties companies. Stagecoach also bought bus operations in Scotland, Newcastle and London, with Manchester being added a few years later.[7] In 1993, Stagecoach was valued at £134 million and was floated on the London Stock Exchange to access capital for new opportunities for buses and trains overseas.

By the mid 1990s, Stagecoach developed its interests in Australia and New Zealand. The company further expanded with the purchase of Citybus, an operator of buses and ferries in Hong Kong, and Coach USA, the largest bus and coach operator in the USA and Canada.[8][dubious – discuss] Souter became Chief Executive, and later sold off much of Coach USA.[citation needed]

Following the deregulation of bus services in the United Kingdom, Stagecoach bought a number of the new small bus companies and ran free or low fare buses to put local rivals out of business.[6] In Darlington, Stagecoach subsidiary Busways offered bounties to recruit drivers from the existing bus service and offered free buses to deter the rival preferred bidder from taking over that service. This practice was deemed as "predatory, deplorable and against the public interest" according to the Monopolies and Mergers Commission.[9][10]

In 2009, Souter received a £1.6m bonus. Stating "it was felt that in the present economic climate it would not be right for any individual to pocket a bonus package of £1.6million", he donated £900,000 to his own charity, the Souter Charitable Trust, which assists humanitarian projects in the UK and overseas. Most of the remainder was given to the staff pension fund.[11][12]

In August 2012, it was announced that Souter would become Chairman of Stagecoach Group on 1 May 2013, finance director Martin Griffiths replacing Souter as CEO.[13]

Shortly after Souter floated Stagecoach on the London Stock Exchange, he turned his attention to British railways. Initial experiments consisted of a Scotland to London service branded Stagecoach Rail with carriages attached to the Caledonian Sleeper. During the privatisation of British Rail, Stagecoach bid successfully to operate the South West Trains franchise from 1996 followed by the Island Line Trains later the same year. Stagecoach successfully bid to retain both when retendered in 2001 and 2006.[14]

In 2003, Souter added the bus and coach operator Megabus to the group.[18] With its slogan "Low Cost Inter City Travel Serving Europe", it offered discounted travel across the UK and Europe. In 2012 it operated in 31 cities in the UK with a turnover in excess of £2 billion, with annual profits of over £250 million.[19]

In April 2013 Souter announced a new Megabus overnight sleeper service from Scotland to London. The sleeper coaches cost £5 million to build, and have 53 leather seats which can be converted into 42 bunk beds. Passengers receive a onesie for sleeping in during the trip.[20]

Souter has more than 200 private investments, which are managed by his company, Souter Investments. They include stakes in insurance specialists esure and Gocompare.com. In October 2010, Souter Investments reported that the value of its portfolio had risen by 41% over the preceding three years, to £400 million.[21]

Souter and his sister Ann Gloag formed Highland Global Transport in 2012. It owns a portfolio of transport related investments valued at more than £600million[22] including:

Highland Global Transport has purchased and established a number of subsidiaries in New Zealand. In August 2015, these were brought together under the one umbrella as the InMotion Group with 340 buses and coaches and 17 ferries.[23][24][25]

Institute of Chartered Accountants of Scotland 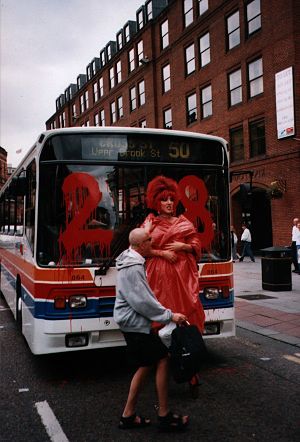 Section 28 protestor with a Stagecoach Manchester bus in July 2000

In 2000, when the Scottish Government were planning to abolish Section 28 laws, which forbade local authorities from "intentionally promoting homosexuality", Souter was the prominent leader of the Keep the Clause campaign to prevent its abolition. In Scotland, where Section 28 was known as clause 2A, Souter spent £1 million on the first privately funded postal referendum across Scotland to gauge public opinion. A spokesman for Souter stated "He is not in this for personal glory. He is fighting this battle because he is a father and committed Christian."[27]

Souter pointed out that the number of people who voted to keep the clause exceeded the number of votes cast for any single political party in Scotland at any election over the preceding ten years,[citation needed] although Scottish voters usually choose from four main parties, not two options. The campaign was ultimately unsuccessful.

Souter's campaign group approached the Electoral Reform Society to organise the ballot through its ballot services subsidiary. The society refused the request as it believed the poll "would not be a legitimate democratic exercise to ask people to give an opinion on the repeal of Section 28 without knowing the detail of what would replace it".[28] Many groups hostile to Souter's stance had called for a public boycott of the poll, and accordingly claimed that as only a minority voted this was a defeat for Souter and his supporters. Mainstream politicians, including the Scottish National Party (which Souter has supported) largely ignored his poll and disputed whether the result was a true reflection of public opinion, with the Scottish Executive stating that the public had been fed a diet of "misinformation and lies" by Souter's campaign group.[27] The Communities Minister, Wendy Alexander MSP, criticised the poll, stating "I think what is significant about today's ballot is that two out of three voters rejected, or binned or simply ignored this glorified opinion poll."[29] Gay rights campaigner Peter Tatchell stated that "Brian Souter’s support for Section 28 is the moral equivalent of the business-funded campaign to maintain racial segregation in the Deep South of the USA in the 1950s." Tatchell said that Souter's campaign was "hateful" and that it is clear that he was using his vast fortune to try to keep a cruel and "bigoted law" intact.[30]

Donations to the SNP

Souter is a major financial supporter of the Scottish National Party (SNP). In March 2007, he donated £500,000, citing an imbalance of funding within Scottish politics.[31] He stated that it was his intention to redress an imbalance in funding: "as long as I can remember, the case for the union has been hugely financed by cash from London, while the case for independence has lacked resources. I hope my donation will help redress this imbalance".[32] Following the donation, SNP leader Alex Salmond was criticised for "pandering to homophobia" by accepting the donation[32] - particularly as the party had just opposed the right for gay couples to be given equal treatment by Catholic adoption agencies and had snubbed a gay rights debate in January 2007.[32] Salmond thanked Souter for his support, calling him "one of the outstanding entrepreneurs of his generation".[32] One month later, in April 2007, the SNP's commitment (made at the party's 2006 conference) to re-regulate the bus network was dropped from the 2007 manifesto, although the SNP denied any direct link.[33]

In February 2011 Souter again pledged financial support for the SNP, promising to match every pound they raised with a donation of up to £500,000. Announcing his support he said Salmond and the SNP deserved a second term in office.[34][35] The SNP won a resounding victory in the election with Salmond being returned unopposed as First Minister.[36]

The BBC reported in August 2014 that Souter had donated £1 million to the campaign for independence.[37]

In 1992 Souter and his wife set up the Souter Charitable Trust, which assists humanitarian projects in the UK and overseas, especially, but not exclusively, those with a Christian emphasis.[38] Projects include the prevention of malaria and supplying daily meals to school children in Africa. According to its website, the trust has awarded over 2,700 grants worth more than £20 million.[39]

Groups funded annually by the trust include Tearfund, The Message Trust, Oasis Trust and Jam International.[40]

In 1989 Souter received an award from the Scottish Business Achievement Award Trust.[citation needed]

In 1997 he was granted an honorary degree from Strathclyde University.[41]

In 1998 he was awarded the Scottish Entrepreneur Award.[42]

In 1999 he received his second honorary degree, from Abertay University.[43]

In 2004 he was honoured with the Businessman of the Year award at the Insider Elite Awards.[44]

In 2008 he was given a Special Recognition Award for services to the bus industry.[45]

In June 2010 he was given a Special Career Service Award at the "Talent In Mobility" Awards, part of the European Mobility Exhibition held in Paris for the public transport industry.[46]

In October 2010 he was awarded the Ernst & Young UK Master Entrepreneur of the Year.[47]

In 2011 he was presented with an outstanding achievement award at the 2011 Perthshire Chamber of Commerce Business Star Awards.[48]

On 18 April 2012 he was inducted into the British Travel and Hospitality Industry Hall of Fame, the first public transport entrepreneur to receive the honour.[49]

Souter was knighted in the 2011 Birthday Honours for services to transport and the voluntary sector.[50][51][51] This proved controversial, and was criticised by Scottish Labour MP Cathy Jamieson, who suggested a link between the knighthood and the large amounts of money he has donated to the Scottish National Party. In a public statement, Jamieson said: "The First Minister and his party must look seriously at the relationship they have developed with wealthy individuals handing them large sums of cash. The public will rightly be asking what’s next on Mr Souter’s shopping list?"[52] Salmond denied any wrongdoing in the matter and referred himself for investigation after calls for a probe by Scottish MP Jim Sheridan. An independent report, conducted by Lord Fraser of Carmyllie, cleared Salmond of any wrongdoing, asserting that "There appears to me to have been no breach of the ministerial code by Alex Salmond as First Minister and he should be wholly exonerated of any breach."[53]

Souter's knighthood was also criticised by gay rights campaigners, who felt that the honour was insulting towards the gay community and was effectively rewarding homophobia, given Souter's past campaigning. A petition to have the knighthood withdrawn received 5000 signatures by July 2011.[54]

In 1998, Souter described British northerners (who make up a considerable proportion of his customers) as "the beer-drinking, chip-eating, council house-dwelling, old Labour-voting masses."[55][56][57]