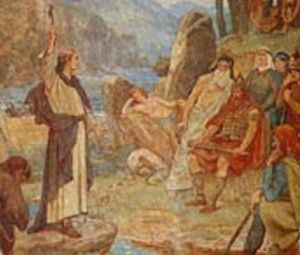 Bridei is first mentioned in Irish annals for 558–560, when the Annals of Ulster report "the migration before Máelchú's son i.e. king Bruide".[2] The Ulster annalist does not say who fled, but the later Annals of Tigernach refer to "the flight of the Scots before Bruide son of Máelchú" in 558. This has provoked considerable speculation in some cases as, in one version, the Annals of Ulster may associate this with the death of Gabrán mac Domangairt.[3]

As a contemporary, and one of the chief kings in Scotland, Bridei appears in Adomnán's Life of Saint Columba.[4] Adomnán's account of Bridei is problematic in that it fails to tells us whether Bridei was already a Christian, and if not, whether Columba converted him.[5] The recent archaeological discoveries at Portmahomack, showing that there was a monastic community perhaps as early as the late 6th century, may provide some support for the idea that Bridei was either already a Christian, at least in name, or was converted by Columba.

It is a matter of record that Bridei was not the only king in Pictland. The death of Galam — called "Cennalath, king of the Picts" — is recorded in 580 by the Annals of Ulster, four years before Bridei's death.[6] In addition, Adomnán mentions the presence of the "under-king of Orkney" at Bridei's court.[7] The Annals of Ulster report two expeditions to Orkney during Bridei's reign, or, as seems equally probable, one expedition twice, in 580 and 581.[8]

The chief place of Bridei's kingdom, which may have corresponded with later Fortriu, is not known. Adomnán tells that after leaving the royal court, by implication soon afterwards, Columba came to the River Ness, and that the court was atop a steep rock. Accordingly, it is generally supposed that Bridei's chief residence was at Craig Phadrig, to the west of modern Inverness overlooking the Beauly Firth.

Bridei's death is reported in the 580s, perhaps in battle against Pictish rivals in Circinn, an area thought to correspond with the Mearns.[9] The king lists of the Pictish Chronicle agree that Bridei was followed by one Gartnait son of Domelch.

Bridei is suggested to have been the son of Maelgwn Gwynedd by John Morris in his Age of Arthur, where he refers in passing and without authority, to "... Bridei, son of Maelgwn, the mighty king of north Wales, ...".[10] Though the book has been a commercial success, it is disparaged by historians as an unreliable source of "misleading and misguided" information.[11]

Juliet Marillier's trilogy The Bridei Chronicles is written as a combination of history, fiction and informed guesswork regarding this king's rise to power and rule. Her novels also describe events in the life of Bridei III