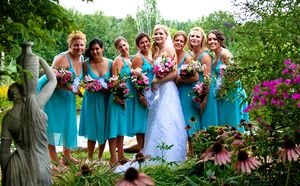 Seven bridesmaids in matching dresses, with the bride

The bridesmaids are members of the bride's party in a wedding. A bridesmaid is typically a young woman, and often a close friend or sister. She attends to the bride on the day of a wedding or marriage ceremony. Traditionally, bridesmaids were chosen from unwed young women of marriageable age.

Often there is more than one bridesmaid: in modern times the bride chooses how many to ask. Historically, no person of status went out unattended, and the size of the retinue was closely calculated to be appropriate to the family's social status. A large group of bridesmaids provided an opportunity for showing off the family's social status and wealth. Today, the number of bridesmaids in a wedding party is dependent on many variables, including a bride's preferences, the size of her family, and the number of attendants her partner would like to have as well.

The male equivalent is the groomsman, also known in British English as an usher; in the United States, the role of attending to the groom has diverged from that of escorting guests to their seats, and the two positions are no longer synonymous and are often if not usually filled by different persons.

In some cultures, such as in Norway and Victorian England, it has been customary for bridesmaids to be small girls rather than grown women. They may carry flowers during the wedding procession and pose with the married couple in bridal photos. In modern English-speaking countries, this role is separate from that of the bridesmaid, and the small child performing it is known as a flower girl. 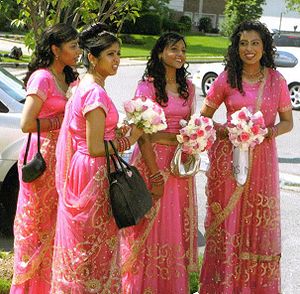 Although many exceed the minimum, the bridesmaids' required duties are very limited.[1] They are required to attend the wedding ceremony and to assist the bride on the day of the wedding. Bridesmaids in Europe and North America are often asked to assist the bride with planning the wedding and a wedding reception. In modern times, a bridesmaid often participates in planning wedding-related events, such as a bridal shower or bachelorette party, if there are any. These, however, are optional activities; according to etiquette expert Judith Martin, "Contrary to rumor, bridesmaids are not obliged to entertain in honor of the bride, nor to wear dresses they cannot afford."[2] If it is customary in the bride's area to have a bridesmaids luncheon, then it is hosted, and therefore organized and paid for, by the bride.[3] A junior bridesmaid has no responsibilities beyond attending the wedding. 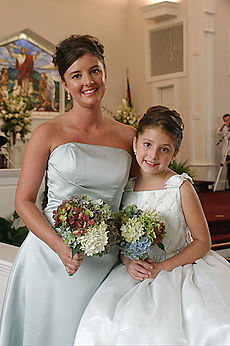 This junior bridesmaid, in North Carolina, USA, is dressed in white, like the bride.

The duties and costs of being a bridesmaid are parsed out between a bride and her attendants in a variety of ways. Since modern bridesmaids, unlike their historical counterparts, can no longer rely on having their clothes and travel expenses paid for by the bride's family, and are sometimes even told they must pay for parties that the bride wants to have before the wedding, it has become customary for the bride to present the bridesmaids with gifts as a sign of gratitude for the support and financial commitment that comes with their roles. It has become equally customary for women who are invited to serve as bridesmaids to first ask about the amount of time, energy, and money that the bride expects from them before accepting this position, and to decline or resign if this is more than they will be able to give.[4] In some American weddings, each bridesmaid may be asked to spend US $1,700 or more, with travel to destination weddings and pre-wedding parties usually being the biggest expense.[4] 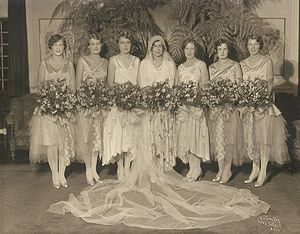 The bride (center) with her maid of honor (third from left) and bridesmaids. The maid of honor can be distinguished by her dress, which differs somewhat from that of the other bridesmaids, as well as by her position in the traditional place of honor at the immediate right of the principal party. From 1929, in Minnesota, USA.

In the United Kingdom, the term "maid of honor" originally referred to the female attendant of a queen. The term bridesmaid is normally used for all bridal attendants in the UK. However, when the attendant is married, or is a mature woman, the term matron of honor is often used. The influence of American English has led to the chief bridesmaid sometimes being called the maid of honor.

In North America, a wedding party might include several bridesmaids, but the maid of honor is the title and position held by the bride's chief attendant, typically her closest friend or sister. In modern-day weddings some brides opt to choose a long-time male friend or brother as their head attendant, using the title best man or man of honor.

The activities of the principal bridesmaid may be as many or as varied as she allows the bride to impose upon her. Her only required duty is to participate in the wedding ceremony. Typically, however, she is asked for help with the logistics of the wedding as an event, such as addressing invitations, and for her help as a friend, such as attending the bride as she shops for her wedding dress.

On the day of the wedding, her principal duty is to provide practical and emotional support. She might assist the bride with dressing and, if needed, help the bride manage her veil, a bouquet, a prayer book, or the train of her wedding dress during the day. In a double-ring wedding, the chief bridesmaid is often entrusted with the groom's wedding ring until it is needed during the ceremony. Many brides ask bridesmaids, if they are adults, to be legal witnesses who sign the marriage license after the ceremony. If there is a reception after the wedding, the maid of honor may be asked to offer a toast to the newlywed.

The origin of the Western bridesmaid tradition is largely unknown, though it likely developed out of the need for witnesses to a wedding under civil law.[citation needed]

Others cite the Biblical story of Jacob, and his two wives Leah and Rachel, who both literally came with their own maids as detailed in the Book of Genesis (29:24, 46:18) as the origin of bridesmaids. These women were handmaidens (servants or slaves) instead of social peers.