From Infogalactic: the planetary knowledge core
Jump to: navigation, search
This article is about the neighborhood on Chicago's South Side. For the city located in Lawrence County, see Bridgeport, Illinois.

Bridgeport, one of 77 community areas of Chicago, Illinois, is a neighborhood on the city's South Side, bounded on the north by the South Branch of the Chicago River, on the west by Bubbly Creek, on the south by Pershing Road, and on the east by the Union Pacific railroad tracks. Neighboring community areas are the Lower West Side across the river to the north, McKinley Park to the west, Canaryville to the south, and Armour Square to the east. Bridgeport has been the home of five Chicago mayors. Once known for its racial intolerance, Bridgeport today ranks as one of the city's most diverse neighborhoods.[2] 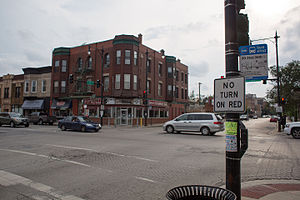 Historically, much of the neighborhood was initially an Irish-American enclave. In the 1830s, large numbers of immigrants from Ireland started settling in this working-class neighborhood. Many of the same Irish immigrants who helped build the Erie Canal later came to Chicago to work on the Illinois and Michigan Canal. Because of inadequate funding for the project, the State of Illinois began issuing "Land Scrip" to the workers rather than paying them with money. A large number of those Irish-Americans who received the scrip used it to purchase canal-owned land at the northern end of the canal where it meets the south branch of the Chicago River. The original Bridgeport village, named "Hardscrabble," centered around what is now the section of Throop Street north of 31st Street.[3] The area later became known as Bridgeport because of its proximity to a bridge on the Chicago River, which was too low to allow safe passage for boats, forcing cargo to be unloaded there. Finley Peter Dunne later wrote about this area in popular sketches around the turn of the 20th century. Dunne's protagonist, Mr. Dooley, lived on "Archey Road" (present day Archer Avenue).

Although the Irish are Bridgeport's oldest and arguably most famous ethnic group, Bridgeport has also been home to a large number of other groups. Bridgeport is also home to many Italian-Americans, as is its smaller neighbor to the east, Armour Square.[4][5] Many Lithuanian-Americans settled along Lituanica Avenue, which runs between 31st Street and 38th Place one block west of Halsted Street in what was once called "Lithuanian Downtown" and the center of Lithuanian settlement in Chicago. Today, there are also large numbers of first and second generation Mexican-Americans and Chinese-American who, like the Irish immigrants of the 19th century, have settled in the Bridgeport area due to its affordable housing and proximity to their work.

Bridgeport's Polish history is most visibly represented in its two churches in the Polish Cathedral style: St. Mary of Perpetual Help, and St. Barbara. The Art Institute of Chicago has done restoration work on the paintings in the Shrine Altars at St. Mary of Perpetual Help which date back to 1890, with further plans calling for restoration of the stained glass windows and to complete the painting of the interior ceilings and rotunda.

The Chinese influence in Bridgeport has also followed in the tradition of ethnic groups in the neighborhood establishing places of worship, with the Ling Shen Ching Tze (真佛宗美) Buddhist Temple on West 31st Street being established in 1992.[6]

Bridgeport has been the home or birthplace of five mayors of Chicago, representing all but 10 years between 1933 and 2011, illustrating the neighborhood's influence on Chicago politics for most of the 20th century:[7]

Kelly, Kennelly, the elder Daley, and Bilandic comprised an unbroken, 46-year period (1933-1979) in which Bridgeport was home to the city's mayor. Richard J. Daley is widely acknowledged as being the architect of the Chicago's 'machine politics' for a large part of the 20th Century.[8] Daley's base was rooted largely in Bridgeport's working-class Irish population with the 11th Ward as his vanguard.[9][10] The 11th Ward Democratic party, which is headquartered in Bridgeport near 36th Street and Halsted, remains a stronghold of the Daley family today, represented by Alderman Patrick Daley Thompson and his uncle, Committeeman John P. Daley.[11] Alderman Thompson represents the third generation of the Daley family to serve in Chicago politics: he is the grandson of Richard J. Daley and the nephew of Richard M. Daley. Thompson was sworn into office in May 2015.

In 2008 the Chicago Sun-Times listed Bridgeport as one of the four most ethnically diverse neighborhoods in Chicago, alongside Albany Park, West Ridge, and Rogers Park. A traditionally working-class neighborhood, with a diverse ethnic heritage, Bridgeport's cultural history has left an indelible mark on Chicago cuisine. While pizza is well represented in Bridgeport, it is the breaded-steak sandwich served by most of the neighborhood's pizzerias, that the neighborhood can claim as an original.[17] Chinese and Mexican fare are also well represented, particularly along 31st Street, Halsted Street, and Archer Avenue. Bridgeport in the early 21st century has also begun to experience an upswing in new restaurants, with a few recent additions serving items ranging from British-style pies to organic offerings.[18][19]

The neighborhood is served by the Bridgeport News, a community newspaper delivered weekly on Wednesdays to homes throughout the neighborhood. 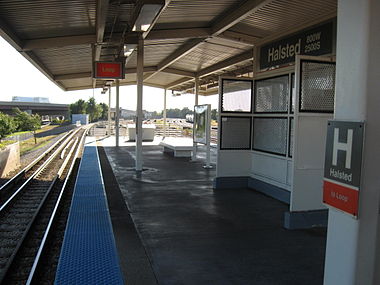 Southwestward view from the platform of the Halsted Station on CTA's Orange Line. The outbound lanes of the Stevenson Expressway (I-55 South) are visible on the left, passing over Archer Avenue.

The area is served by the Chicago Transit Authority's Orange Line at the Halsted and Ashland stations, although Ashland is technically a few blocks outside of the neighborhood.