Bridget Loves Bernie is an American television comedy program created by Bernard Slade, the creator of the 1970–74 ABC sitcom The Partridge Family and the 1967-70 sitcom The Flying Nun. Bridget Loves Bernie was based loosely on the premise of the 1920s Broadway play and 1940s radio show Abie's Irish Rose. It stars Meredith Baxter and David Birney as the title characters. It ran for one season, from 1972 to 1973, on CBS.

Baxter and Birney married in real life after the program went off the air.

The series was regarded, at the time, as somewhat controversial, in that it depicted an interfaith marriage between a wealthy Irish Catholic teacher (Bridget) and a Jewish cab driver (Bernie), whom she'd met at a bus stop. With a primetime slot between All in the Family and The Mary Tyler Moore Show on Saturday nights, the situation comedy was #5 in the ratings among all shows for that television season and obtained a 24.2 rating, tying with The NBC Sunday Mystery Movie. Nevertheless, CBS executives decided to cancel the show in response to hate mail from viewers who objected to the inter-religious marriage depicted on the series. It was the highest-rated television program ever to be canceled after only one season.[1] 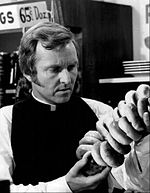 On December 4, 2012, Sony Pictures Home Entertainment released the complete series on DVD in Region 1.[2] This is a Manufacture-on-Demand (MOD) release, available exclusively through Amazon.com & WBShop.com and only in the US.