From Infogalactic: the planetary knowledge core
Jump to: navigation, search
For other uses, see Brig (disambiguation).
Not to be confused with Brigantine.

A brig is a sailing vessel with two square-rigged masts. During the Age of Sail, brigs were seen as fast and maneuverable and were used as both naval warships and merchant vessels. They were especially popular in the 18th and early 19th centuries. Brigs fell out of use with the arrival of the steam ship because they required a relatively large crew for their small size and were difficult to sail into the wind. They are not to be confused with a brigantine, which has different rigging[further explanation needed]. A brig is distinct from a three-masted ship by virtue of only having two masts. 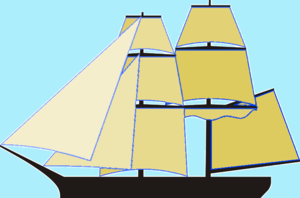 In sailing, a full-rigged brig is a vessel with two square rigged masts (fore and main).[2] The main mast of a brig is the aft one. To improve maneuverability, the mainmast carries a small (gaff rigged) fore-and-aft sail.[3]

Brig sails are named after the masts to which they are attached: the mainsail; above that the main topsail; above that the main topgallant sail; and occasionally a very small sail, called the royal, is above that. Behind the main sail there is a small fore-and-aft sail called the spanker or boom mainsail (it is somewhat similar to the main sail of a schooner). On the foremast is a similar sail, called the trysail. Attached to the respective yards of square-rigged ships are smaller spars, which can be extended, thus lengthening the yard, thus receiving an additional sailing wing on each side. These are called studding sails, and are used with fair and light wind only. The wings are named after the sails to which they are fastened, i.e. the main studding sails, main top studding sails, and the main top gallant studding sails, etc.[4]

The brig’s foremast is smaller than the main mast. The fore mast holds a fore sail, fore top sail, fore top gallant sail, and fore royal. Between the fore mast and the bowsprit are the fore staysail, jib, and flying jib. All the yards are manipulated by a complicated arrangement of cordage named the running rigging. This is opposed to the standing rigging which is fixed, and keeps mast and other objects rigid.[4]

A brig is “generally built on a larger scale than the schooner, and often approaches in magnitude to the full-sized, three-masted ship.”[4] Brigs vary in length between 75 and 165 ft (23–50 m) with tonnages up to 480.[5] Historically most brigs were made of wood, although some latter brigs were built with hulls and masts of steel or iron (such as the brig Bob Allen[6]).[3] A brig made of pine in the 19th century was designed to last for about twenty years (many lasted longer).[3]

Development of the brig

The word "brig" has been used in the past as an abbreviation of brigantine (which is the name for a two-masted vessel with foremast fully square rigged and her mainmast rigged with both a fore-and-aft mainsail, square topsails and possibly topgallant sails). The brig actually developed as a variant of the brigantine. Re-rigging a brigantine with two square-rigged masts instead of one gave it greater sailing power. The square-rigged brig's advantage over the fore-and-aft rigged brigantine was "that the sails, being smaller and more numerous, are more easily managed, and require fewer men or 'hands' to work them."[4] The variant was so popular that the term "brig" came to exclusively signify a ship with this type of rigging.[7] By the 17th century the British Royal Navy defined "brig" as having two square rigged masts.[8]

Brigs were used as small warships carrying about 10 to 18 guns.[5] Due to their speed and maneuverability they were popular among pirates (though they were rare among American and Caribbean pirates).[4][7] While their use stretches back before the 17th century, one of the most famous periods for the brig was during the 19th century when they were involved in famous naval battles such as the Battle of Lake Erie. In the early 19th century the brig was a standard cargo ship. It was seen as "fast and well sailing", but required a large crew to handle its rigging.[9] While brigs could not sail into the wind as easily as fore-and-aft–rigged vessels such as schooners, a trait that is common to all square-rigged ships, a skilled brig captain could "manoeuvre it with ease and elegance; a brig could for instance turn around almost on the spot".[10] A brig's square-rig also had the advantage over a fore-and-aft–rigged vessel when travelling offshore, in the trade winds, where vessels sailed down wind for extended distances and where "the danger of a sudden jibe was the large schooner-captain's nightmare".[11] This trait later led to the evolution of the barquentine. The need for large crews in relation to their relatively small size led to the decline of the production of brigs. They were replaced in commercial traffic by gaffsail schooners (which needed fewer personnel) and steam boats (which did not have the windward performance problems of square rigged ships).[9]

The Telos, built in Bangor, Maine in 1883, was reportedly the last brig to join the American merchant marine, and was "considered to be the finest vessel of her class ever constructed in Maine". She was wrecked on Aves Island, off Bonaire in the Caribbean, in 1900.[12] 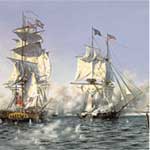 Painting of the brig USS Niagara in the Battle of Lake Erie.

Note that while the famous mystery ship Mary Celeste is sometimes called a brig, she was clearly a brigantine. 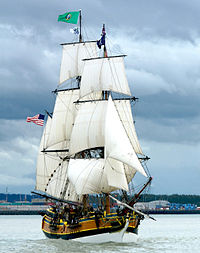