From Infogalactic: the planetary knowledge core
Jump to: navigation, search
This article is about a type of military unit. For other uses, see Brigade (disambiguation).

A brigade is a major tactical military formation that is typically composed of three to six battalions plus supporting elements. It is roughly equivalent to an enlarged or reinforced regiment. Two or more brigades may constitute a division.

Brigades formed into divisions are usually infantry or armored (sometimes referred to as combined arms brigades). In addition to combat units, they may include combat support units or sub-units, such as artillery and engineers, and logistic units or sub-units. Historically, such brigades have sometimes been called brigade-groups. On operations, a brigade may comprise both organic elements and attached elements, including some temporarily attached for a specific task.

Brigades may also be specialized and comprise battalions of a single branch, for example cavalry, mechanized, armored, artillery, air defence, aviation, engineers, signals or logistic. Some brigades are classified as independent or separate and operate independently from the traditional division structure. The typical NATO standard brigade consists of approximately 3,200 to 5,500 troops. However, in Switzerland and Austria, the numbers could go as high as 11,000 troops. The Soviet Union, its forerunners and successors, mostly use "regiment" instead of brigade, and this was common in much of Europe until after World War II.

A brigade's commander is commonly a brigadier general, brigadier or colonel. In some armies, the commander is rated as a General Officer. The brigade commander has a self-contained headquarters and staff. The principal staff officer, usually a lieutenant colonel or colonel, may be designated chief of staff, although until the late 20th century British and similar armies called the position 'brigade-major'. Some brigades may also have a deputy commander. The headquarters has a nucleus of staff officers and support (clerks, assistants and drivers) that can vary in size depending on the type of brigade. On operations, additional specialist elements may be attached. The headquarters will usually have its own communications unit. 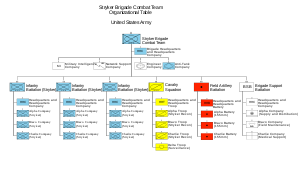 In some gendarmerie forces, brigades are the basic-level organizational unit.

The brigade was invented as a tactical unit by the Swedish king Gustavus Adolphus. It was introduced during the Thirty Years' War to overcome the lack of coordination between normal army structure consisting of regiments by appointing a senior officer. The term derives from Italian brigata, as used for example in the introduction to The Decameron, where it refers only to a group of ten, or Old French brigare, meaning "company" of an undefined size, which in turn derives from a Celtic root briga, which means "strife."

The so-called "brigada" was a well mixed unit, comprising infantry, cavalry and normally also artillery, designated for a special task. The size of such "brigada" was a reinforced "company" of up to two regiments. The "brigada" was the ancient form of the modern "task force".

This was copied in France by General Turenne, who made it a permanent standing unit, requiring the creation in 1667 of a permanent rank of brigadier des armées du roi (literally translating to brigadier of the armies of the king), which would in time be renamed simply Général de brigade (but would still be referred to occasionally as brigadier for short).

In the Australian Army, the brigade has always been the smallest tactical formation, since regiments are either administrative groupings of battalions (in the infantry) or battalion-sized units (in the cavalry). A typical brigade may consist of approximately 5,500 personnel between two mechanised infantry battalions, an armored regiment, an armored artillery regiment, and other logistic and engineering units. The brigade is usually commanded by an officer holding the rank of Brigadier, who is referred to as the "Brigade Commander".

Brigades, with a field not a regional administrative role, have usually been of a named type and numbered since the 19th century (e.g. Cavalry Brigade or Infantry Brigade). From after World War II, brigade numbers have been unique and not by type. Brigades in divisions do not usually command their combat support and combat service support units. These remain under divisional command, although they may be permanently affiliated with a particular brigade (as a "brigade group"). Historically, infantry or cavalry/armored brigades have usually comprised three or four combat arm battalions, but currently larger brigades are normal, made larger still when their affiliated artillery and engineer regiments are added.

Until 1918, the chief of staff of a brigade was known as a Brigade Major. Before 1922, British Army brigades were normally commanded by general officers holding the "one-star" rank of Brigadier-General; after that date, the appointment became that of Brigadier, usually held by a field officer with the substantive rank of Colonel.

From 1859 to 1938, "brigade" ("brigade-division" 1885–1903) was also the term used for a battalion-sized unit of the Royal Artillery. This was because, unlike infantry battalions and cavalry regiments, which were organic, artillery units consisted of individually numbered batteries that were "brigaded" together. The commanding officer of such a brigade was a Lieutenant Colonel. In 1938, the Royal Artillery adopted the term "regiment" for this size of unit, and "brigade" became used in its normal sense, particularly for groups of anti-aircraft artillery regiments commanded by a brigadier.[1]

In the Second World War, a Tank Brigade comprised three tank regiments and was equipped with infantry tanks for supporting the Infantry divisions. Armored Brigades were equipped with cruiser tanks or (US Lend-Lease) medium tanks and a motorised infantry battalion. The armored divisions included one or more armored brigades.

The Canadian Army currently has three Regular Force brigade groups, designated as Canadian mechanized brigade groups (CMBG): 1 CMBG, 2 CMBG, which contain the regular army's Anglophone units, and 5 CMBG, the regular Francophone formation. These CMBGs are each composed of two mechanized infantry battalions, one light infantry battalion, one armored regiment, one mechanized artillery regiment, one engineer regiment, and one combat service and support (CSS) battalion. Co-located with each CMBG is a field ambulance, and a tactical helicopter squadron, and a military police platoon. Regular Force CMBG strengths are 5,000 personnel.[2] Canada also has 10 Primary Reserve brigades (Canadian brigade group, CBG), 31 CBG through 39 CBG, and 41 CBG. The CBG formations are for administrative purposes.

An NRA Brigade, 旅, was a military formation of the Chinese Republic's National Revolutionary Army. Infantry and Cavalry Brigades were composed of two Infantry Regiments. After the 1938 reforms, the Brigade was dispensed with within the Infantry Division in favor of the Regiment to simplify the command structure.[3] 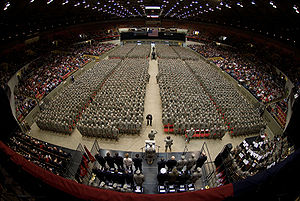 A U.S. infantry brigade of around 3,200 personnel, formed into eight battalion-sized groups

In the United States Army, a brigade is smaller than a division and roughly equal to or a little larger than a regiment. During the American Civil War infantry brigades contained two to five regiments with the idea being to maintain a unit with a strength of 2,000 soldiers[4] and were usually commanded by a brigadier general or a senior colonel. During World War I the division consisted of four regiments divided into two brigades of two regiments each.

More recently, the U.S. Army has moved to a new generic brigade combat team (BCT) in which each brigade contains combat elements and their support units. After the 2013 reform, BCT personnel strength typically ranges from 4,400 for infantry BCTs, to 4,500 for Stryker BCTs, to 4,700 for armored BCTs. This formation is standard across the active U.S. Army, U.S. Army Reserve, and the Army National Guard.

The brigade commander is usually a colonel, although a lieutenant colonel can be selected for brigade command in lieu of an available colonel. A typical tour of duty for this assignment is 24 to 36 months.

A brigade commander enjoys a headquarters and staff to assist him in commanding the brigade and its subordinate battalion units. The typical staff includes:

In addition, the headquarters includes additional junior staff officers, non-commissioned officers, and enlisted support personnel in the occupational specialties of the staff sections; these personnel are ordinarily assigned to the brigade's headquarters and headquarters company.

In the United States Marine Corps, brigades are designated as Marine Expeditionary Brigades (MEB), and are usually commanded by a brigadier general. The MEB is a mid-level Marine Air-Ground Task Force (MAGTF) essentially forming a "demi-division." The MEB organizational structure is completely different from an army brigade, and consists of a minimum of three regimental-equivalent sized units and a command element (a Regimental Combat Team, a Composite Marine Aircraft Group, a Marine Logistics Regiment, and a MEB Headquarters Group). Each Marine Expeditionary Force (MEF) contains a MEB, available for deployment on expeditionary duty. The MEB is the intermediate MAGTF between the MEF and the Marine Expeditionary Unit (MEU). Along with the Marine Infantry Regiments, the MEU, (while smaller than an army brigade), are the USMC organizational equivalents of army brigades. The MEU consists of three battalion-equivalent sized units and a command element (a Battalion Landing Team, a Marine Medium Tilt-rotor Squadron (Reinforced), a Combat Logistics Battalion, and a MEU Headquarters Group). The Marine Infantry Regiments, combined with the Marine Artillery Regiments, comprise the bulk of the Marine Divisions. An example of a MEB is Task Force Tarawa (2nd Marine Expeditionary Brigade) during the Operation Iraqi Freedom campaign.