In some countries, this rank is given the name of brigadier, which is often considered not to be a general-officer rank, but is usually equivalent to brigadier general in the armies of nations that use the rank.

The rank can be traced back to the militaries of Europe where a brigadier general, or simply a brigadier, would command a brigade in the field. An alternative rank of "brigade general" was first used in the French revolutionary armies.

In the first quarter of the 20th century, British and Commonwealth armies used the rank of brigadier general as a temporary appointment, or as an honorary appointment on retirement; in the 1920s this practice changed to the use of brigadier, which was not classed as a general officer.

Some countries, such as Brazil,Taiwan,and Japan, use major general as the equivalent of brigadier general. Some of these countries then use the rank of colonel general to make four general-officer ranks.[citation needed]

The naval equivalent is usually commodore.[1]

In the Australian Imperial Force during World War I, the rank of brigadier general was always temporary and held only while the officer was posted to a particular task, typically the command of a brigade. When posted elsewhere, the rank would be relinquished and the former rank resumed. This policy prevented an accumulation of high-ranking general officers brought about by the relatively high turnover of brigade commanders. Brigadier general was also used as an honorary rank on retirement. The rank insignia was like that of the current major general, but without the star/pip[3] - example.

As in the United Kingdom, the rank was later replaced by brigadier. Hence, prior to 1922, a "brigadier general" was a "general officer"; subsequently, brigadiers were not "generals"; this is shown by the rank insignia being like that of a colonel, but with an extra (third) star/pip[3] - example.

The Belgian Army uses the rank of général de brigade (French) and brigadegeneraal (Dutch) (Brigade General). However, in this small military there are no permanent promotions to this rank, and it is only awarded as a temporary promotion to a full colonel who assumes a post requiring the rank, notably in an international context (e.g. as Military Attaché in a major embassy).

General de Brigada (Brigade General) is the lowest rank amongst general officers of the Brazilian Army. A General de Brigada wears two stars as this is the entry level for general officers in the Brazilian Army. In the Brazilian Air Force, the two-star, three-star and four-star ranks are known as Brigadeiro (Brigadier), Major-Brigadeiro (Major-Brigadier) and Tenente-Brigadeiro-do-Ar (Lieutenant-Air-Brigadier) respectively. See Military ranks of Brazil and Brigadier#Officer rank in Latin America for more information.

The rank insignia for a brigadier-general in the Royal Canadian Air Force is a single wide braid on the cuff, as well as a single silver maple leaf beneath crossed sword and baton, all surmounted by St. Edward's Crown, worn on the shoulder straps of the service dress jacket, and on slip-ons on other uniforms. The rank insignia for the Canadian Army is a crossed sabre and baton on the shoulder straps. On the visor of the service cap are two rows of gold oak leaves; the air force wedge cap features silver braid on the edges of the ear flaps. The cap insignia for a general officer is a modified version of the Canadian Forces insignia. Brigadier-generals in the Canadian Army wear gorget patches on the collar of the service uniform tunic.

Brigadier-generals are initially addressed verbally as "General" and name; thereafter by subordinates as "Sir" or "Ma'am" in English or mon général in French. They are normally entitled to staff cars.

Note: Until unification in 1968 of the Royal Canadian Air Force, Canadian Army, and the Royal Canadian Navy, rank structure and insignia followed the British pattern. This system of rank insignia was reinstated in 2014. In army usage, the term "brigadier" was used to denote what is now known as a brigadier-general while the air force used the rank of air commodore.

Chinese rank of (Da-Xiao 大校) or Senior Colonel is a direct equivalent of a brigadier. It ranks above colonel (Shang-Xiao 上校) and below major general (Shao-Jiang 少将). A brigadier is commonly in command of a division (Shi 师) or a brigade (Lu 旅). Divisional commanders are seldom general officers.

The rank of brigadier general is the first general officer rank in the Fuerzas Militares,[4] and the National Police.[5]

Denmark, a NATO member, has for many years been following NATO standards and adapting its rank system to closely relate. As in the armies of most other NATO nations, brigadier general is the lowest of the general ranks, usually a brigade commander.

In the Estonian military, the rank is called Brigaadikindral. 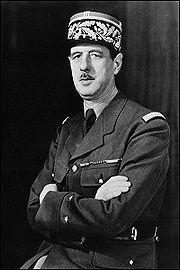 France uses the rank of "brigade general" (général de brigade). It formerly used the historic rank, until 1793, of brigadier des armées ("brigadier of the armies"). The rank contrasts with the French sub-officer rank of brigadier. As with all French general officers, a French brigade general is titled "general" without any implication that he is an army general; for instance General Charles de Gaulle never rose higher than brigade general.

Nowadays, a French général de brigade generally commands a brigade, which is the biggest permanent formation in the French army. The rank can also be awarded in an honorary fashion to retiring colonels. The insignias are two stars, worn on the shoulder are at the sleeve of the uniform, depending on the dress. Two different kepis are issued : the service kepi sports the two stars, while the formal kepi features a large band of oak leaves (the kepi of a division general has two smaller such bands).

Charles de Gaulle held the rank of brigade general. He was given a temporary promotion to this rank in May 1940 as commander of the 4th Armoured Reserve Division (4ème division cuirassée de réserve). However his authority as head of the Free French really came from being the only cabinet member outside occupied France, not from his military rank. As a reminder of his war position, he refused any further promotion.

In Hungary the brigadier general is a relatively new military rank used from 1992. The army and the air force insignia are not different.

In Indonesia, brigadir jenderal (abbreviated as "brigjen") is the fourth highest rank and the lowest general rank both in Polri and TNI. The insignia is a gold star.

The equivalent rank for brigadier general in the Iranian army and air force is called sar-tip. In Persian the word tip means brigade, and sar means head or commander. After 1987 the rank sar-tip dovom (second brigadier general) was introduced between sar-tip and sar-hang (colonel or literally head of regiment). There is no equivalent for sar-tip dovom in other countries. The rank above sar-tip is sar-lashkar. Lashkar means division so, sar-lashkar means divisional general (major general).

The Iranian Revolutionary Guards also use this rank; the difference is in salutation. One refers an army or air force brigadier general as "amir sar-tip", while a revolutionary guard general is referred to as "sardar sar-tip".

Major general is the highest Iranian military rank, and therefore brigadier general is considered to be second highest rank. It is equivalent to the rank of the commander of the air force, and commodore of the Navy.

The country is divided into two areas for administrative and operational reasons, and in each area there is an infantry Brigade. The two brigade group structure envisages distinct operational areas of responsibility for each of the brigades and is supported in its responsibilities by the Naval Service and Air Corps. Each of the Brigade formations and the Air Corps are commanded by a Brigadier General while the Naval Service is commanded by a Commodore. See also Brigade Commanders.

In the Israel Defense Forces, the rank of brigadier general is called tat aluf and is the third highest rank, below aluf (major general) and rav aluf (lieutenant general or general), and above aluf mishne (colonel).

In the Italian Armed Forces the rank has different denominations. In the Army, the rank for combat arms Officers is Generale di Brigata whilst for the logistic and technical corps is called Brigadier Generale. The rank is also present in the other Armed Forces, Police Corps and other services of Italy, with different denominations, and it is associated with the lowest level within the Government top management.

In the Jordanian military, the rank of brigadier general is known as amid (عميد), and it is higher than colonel (akeed عقيد) and lower than major general (liwa لواء).

The rank of brigadier general is known in South Korea as junjang (Korean: 준장; hanja: 准將)[6] and is a direct equivalent to the United States one-star rank, with very similar insignia. The military of North Korea does not technically maintain a brigadier general rank, but the rank of senior colonel (대좌, taejwa) which is above colonel (상좌, sangjwa) and below major general (소장, Sojang) is the effective equivalent.

Prior to 2002, the Polish rank of generał brygady was equivalent to both the ranks of major general and brigadier general.

In the Portuguese Army and Air Force, brigadeiro-general is a temporary general rank for the colonels that have to exercise a special command. It is the equivalent of the commodore rank in the Portuguese Navy.

In the Romanian Army the general de brigadă is the lowest rank of general officers, The equivalent in the Navy is contra-amiral and in the Air-Force general de flotilă aeriană.

In the Spanish Army and Spanish Air Force, general de brigada is the lowest rank of general officers. Its equivalent in the Navy is contraalmirante.

In the Swedish Army and Swedish Air Force, brigadgeneral is the lowest rank of general officers. Its equivalent in the Navy is flottiljamiral.

In the Turkish Army and the Turkish Air Force, the equivalent rank is tuğgeneral (the Turkish Navy equivalent would be tuğamiral). The name is derived from tugay, the Turkish word for a brigade. Both tugay and tuğ- as military terms may owe their origins to the older Turkish word tuğ, meaning horsetail, which was used as a symbol of authority and rank in Ottoman and pre-Ottoman times.

Brigadier-general was formerly a rank or appointment in the British Army and Royal Marines, and briefly in the Royal Air Force. The appointment was abolished in both the Army and the Marines in 1921 and the equivalent rank today is simply Brigadier.