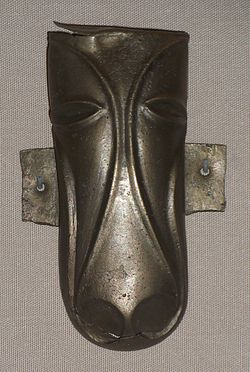 The Brigantes were a Celtic tribe who in pre-Roman times controlled the largest section of what would become Northern England. Their territory, often referred to as Brigantia was centred in what was later known as Yorkshire. The Greek geographer Ptolemy named the Brigantes as a tribe in Ireland also, where they could be found around Wexford, Kilkenny and Waterford[1] while another probably Celtic tribe named Brigantii is mentioned by Strabo as a sub-tribe of the Vindelici in the region of the Alps.[2]

Within Great Britain, the territory which the Brigantes inhabited was bordered by that of four other Celtic tribes: the Carvetii (to whom they may have been related) in the North-West, the Parisii to the east and, to the south, the Corieltauvi and the Cornovii. To the North was the territory of the Votadini, which straddled the present day border between England and Scotland.

The name Brigantes (Βρίγαντες in Ancient Greek) shares the same Proto-Celtic root as the goddess Brigantia, *brigant- meaning "high, elevated", and it is unclear whether settlements called Brigantium were so named as "high ones" in a metaphorical sense of nobility, or literally as "highlanders", referring to the Pennines, or inhabitants of physically elevated fortifications. (IEW, s.v. "bhereg'h-").

There are several ancient settlements named Brigantium around Europe, such as Berganza in Alava (Spain), Betanzos and Bergondo in Galicia (Spain), Bragança in Portugal and Briançon,[3][4] Brigetio on the border of Slovakia and Hungary,[5] Brigobanne situated on the Breg river and near the Brigach river in south Germany (pre-Roman Vindelicia[6])[7] and Bregenz in the Alps.

The Italian word brigante, whence English and French brigand and brigade, occurs in medieval Latin in the 14th century in the forms brigancii, brigantii, brigantini, brigantes (OED). Although an ultimate Celtic origin for the word is possible, any connection of the Italian term to the Celtic ethnonym seems unlikely since the Brigantes had not played any significant role in Italy and had disappeared as a people for some thousand years by the time the word is attested.

In chronostratigraphy, the British sub-stage of the Carboniferous period, the 'Brigantian' derives its name from the Brigantes.[8]

There are no written records of the Brigantes before the Roman conquest of Britain; it is therefore hard to assess how long they had existed as a political entity prior to that. Most key archaeological sites in the region seem to show continued, undisturbed occupation from an early date, so their rise to power may have been gradual rather than a sudden, dramatic conquest, or it may be linked to the burning of the large hill fort at Castle Hill, Huddersfield, c.430BC.[9] Territorially the largest tribe in Britain, the Brigantes encompassed sub-tribes or septs such as the Gabrantovices on the Yorkshire Coast,[10] and the Textoverdi in the upper valley of the River South Tyne [11] near Hadrian's Wall. The names Portus Setantiorum and Coria Lopocarum suggest other groups, the Setantii and the Lopocares located on the Lancashire coast and the River Tyne respectively. A name Corionototae[12] is also recorded but since the name seems to derive from *Corion Toutas meaning "tribal army" or "people's army" it may have been a name for a military force or resistance against the Romans rather than any tribe or sub-tribe. The Carvetii who occupied what is now Cumbria may have been another sub-tribe, or they may have been separate from the Brigantes. This is often disputed as the Carvetii made up a separate civitas under Roman rule.

During the Roman invasion, in 47 AD, the governor of Britain, Publius Ostorius Scapula, was forced to abandon his campaign against the Deceangli of North Wales because of "disaffection" among the Brigantes, whose leaders had been allies of Rome. A few of those who had taken up arms were killed and the rest were pardoned.[13] In 51, the defeated resistance leader Caratacus sought sanctuary with the Brigantian queen, Cartimandua, but she showed her loyalty to the Romans by handing him over in chains.[14] She and her husband Venutius are described as loyal and "defended by Roman arms", but they later divorced, Venutius taking up arms first against his ex-wife, then her Roman protectors. During the governorship of Aulus Didius Gallus (52–57) he gathered an army and invaded her kingdom. The Romans sent troops to defend Cartimandua, and they defeated Venutius' rebellion.[15] After the divorce, Cartimandua married Venutius' armour-bearer, Vellocatus, and raised him to the kingship. Venutius staged another rebellion in 69, taking advantage of Roman instability in the Year of four emperors. This time the Romans were only able to send auxiliaries, who succeeded in evacuating Cartimandua but left Venutius and his anti-Roman supporters in control of the kingdom.[16]

The extensive Iron Age fortifications at Stanwick in North Yorkshire were excavated in the 1950s by Mortimer Wheeler who concluded that Venutius probably had this site as his capital, but Durham University's later excavations from 1981-86 led Colin Haselgrove and Percival Turnbull to suggest a slightly earlier dating with Stanwick a centre of power for Cartimandua instead.[17]

After the accession of Vespasian, Quintus Petillius Cerialis was appointed governor of Britain and the conquest of the Brigantes was begun.[18] It seems to have taken many decades to complete. Gnaeus Julius Agricola (governor 78–84) appears to have engaged in warfare in Brigantian territory.[19] The Roman poet Juvenal, writing in the early 2nd century, depicts a Roman father urging his son to win glory by destroying the forts of the Brigantes.[20] There appears to have been a rebellion in the north sometime in the early reign of Hadrian, but details are unclear. A rising of the Brigantes has often been posited as the explanation for the disappearance of the Ninth Legion, stationed at York. It is possible that one of the purposes of Hadrian's Wall (begun in 122) was to keep the Brigantes from making discourse with the tribes in what is now the lowlands of Scotland on the other side. The emperor Antoninus Pius (138–161) is said by Pausanias to have defeated them after they began an unprovoked war against Roman allies,[21] perhaps as part of the campaign that led to the building of the Antonine Wall (142–144).

Tacitus, in a speech put into the mouth of the Caledonian leader Calgacus, refers to the Brigantes, "under a woman's leadership", almost defeating the Romans.[22]

Ptolemy named nine principal poleis or towns belonging to the Brigantes, these were:

Other settlements known in Brigantian territory include:

The Brigantes are attested in Ireland as well as Britain in Ptolemy's 2nd century Geographia,[23] but it is not clear what link, if any, existed between the Irish and the British Brigantes. T. F. O'Rahilly proposed that the Irish branch was the origin of the later Uí Bairrche clan, believing that they belonged to the Érainn (Ptolemy's Iverni) who he hypothesized were originally descendant from the Gaulish and British Belgae[24] according to his model of Irish prehistory. Prof. John T. Koch posits links between the British and Irish groups, identifying the Romano-British goddess Brigantia with the Irish Brigid and pointing to a possibly Roman or Romano-British burial in Stonyford, County Kilkenny. He identifies the Irish Brigantes with the early mediaeval Uí Brigte clan.[25]