Brillouin scattering, named after Léon Brillouin, occurs when light, transmitted by a transparent carrier interacts with that carrier's periodic spatial & temporal variations in refractive index. As described by optics, the index of refraction of a transparent material changes under deformation (compression-distension or shear-skewing).

The result of the interaction between the light-wave and the carrier-deformation wave is that a fraction of the transmitted light-wave changes its momentum (thus its frequency and energy) in preferential directions, as if by diffraction by an oscillating 3-D grating.

If the involved light carrier is a solid crystal, a macromolecular chain condensate or a viscous liquid or gas, then the low frequency atomic-chain-deformation waves in the carrier (represented as a quasiparticle) could be for example: 1. mass oscillation (acoustic) modes (called phonons); 2. charge displacement modes (in dielectrics, called polarons); 3. magnetic spin oscillation modes (in magnetic materials, called magnons). 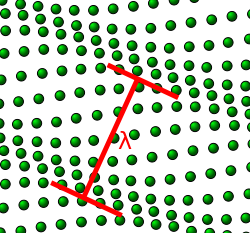 From a solid state physics perspective, Brillouin scattering is an interaction between an electromagnetic wave and one of the three above-mentioned crystalline lattice waves. The scattering is inelastic: the photon may lose energy (Stokes process) to create one of the three quasiparticle types (phonon/ polaron/ magnon) or gain energy (anti-Stokes process) by absorbing one. Such a shift in photon energy, corresponding to a Brillouin shift in frequency, is equal to the energy of the released/ absorbed quasiparticle. Thus, Brillouin scattering can be used to measure the energies, wavelengths and frequencies of various atomic chain oscillation types ('quasiparticles'). To measure a Brillouin shift a commonly employed device is the Brillouin spectrometer, the construction of which is derived from a Fabry–Pérot interferometer .

Rayleigh scattering, too, can be considered to be due to fluctuation in the density, composition and orientation of molecules, and hence of refraction index, in small volumes of matter (particularly in gases or liquids). The difference is that Rayleigh scattering involves only random and incoherent thermal fluctuations, in contrast with the correlated, periodic fluctuations' (phonons) that cause Brillouin scattering.

Raman scattering is another phenomenon involving inelastic scattering of light by the vibrational properties of matter. The detected range of frequency shifts and type of information extracted from experiment are, however, very different. Brillouin scattering dominates the scattering of photons from low-frequency phonons, while for Raman scattering photons are scattered by interaction with vibrational and rotational transitions in the bonds between first-order neighboring atoms. Therefore, the two techniques provide very different information about the sample: Raman spectroscopy is used to determine the chemical composition and molecular structure, while Brillouin scattering measures properties on a larger scale – such as the elastic behaviour. Experimentally, the frequency shifts in Brillouin scattering are detected with an interferometer, while Raman setup can be based on either interferometer or dispersive (grating) spectrometer.

For intense beams (e.g. laser light) travelling in a medium such as an optical fiber, the variations in the electric field of the beam itself may produce acoustic vibrations in the medium via electrostriction or radiation pressure. The beam may undergo Brillouin scattering from these vibrations, usually in opposite direction to the incoming beam, a phenomenon known as stimulated Brillouin scattering (SBS). For liquids and gases, typical frequency shifts are of the order of 1–10 GHz (wavelength shifts of ~1–10 pm for visible light). Stimulated Brillouin scattering is one effect by which optical phase conjugation can take place.

The process of stimulated Brillouin scattering (SBS) was first observed by Chiao et al. in 1964. The optical phase conjugation aspect of the SBS process was discovered by Zel’dovich et al. in 1972.

Brillouin scattering can also be employed to sense mechanical strain and temperature in optical fibers.[2]