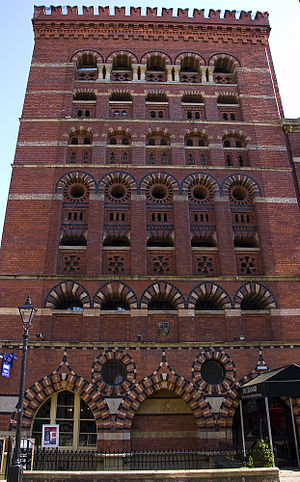 Bristol Byzantine is a variety of Byzantine Revival architecture that was popular in the city of Bristol from about 1850 to 1880.

Many buildings in the style have been destroyed or demolished, but notable surviving examples include the Colston Hall,[1] the Granary on Welsh Back, the Carriage Works,[2] on Stokes Croft and several of the buildings around Victoria Street. Several of the warehouses around the harbour have survived including the Arnolfini which now houses an art gallery.[3] Clarks Wood Company warehouse[4] and the St Vincent's Works[5] in Silverthorne Lane and the Wool Hall[6] in St Thomas Street are other survivors from the 19th century.

Bristol Byzantine has influences from Byzantine and Moorish architecture applied mainly to industrial buildings such as warehouses and factories.

The style is characterised by a robust and simple outline, materials with character and colour including red, yellow black and white brick primarily from the Cattybrook Brickpit.

The first building with some of the characteristics generally thought of a Bristol Byzantine is Bush House, which is now known as the Arnolfini a 19th-century Grade II* listed[3] tea warehouse situated on the side of the Floating Harbour in Bristol city centre. The architect was Richard Shackleton Pope, who constructed first the south part of the warehouse (1831) then extended it to the north in 1835–36. It has a rock-faced plinth, three storeys of rectangular windows recessed within tall round arches, and a shallow attic.[8]

The style may have come about as a result of the an acquaintance between William Venn Gough and Archibald Ponton, who designed the Granary and John Addington Symonds the Bristol-born historian of the Italian renaissance. The term Bristol Byzantine is thought to have been invented by Sir John Summerson.[9] 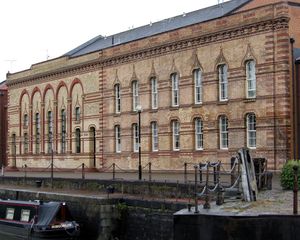 Examples of buildings in the Byzantine architecture style 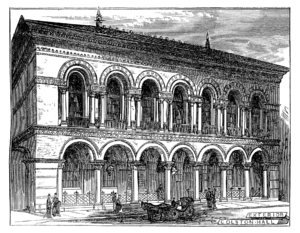 The Colston Hall from an engraving.

Bristol Byzantine in the arts

"Bristol Byzantine" is also the name of a track by The Blue Aeroplanes on their 2006 album Altitude.