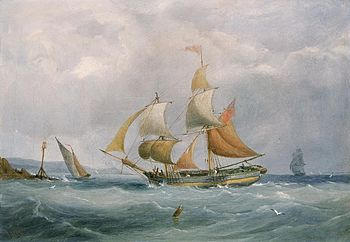 1838 painting by Joseph Walter, showing a trading brig running into the River Avon, being fast approached by a Bristol Channel pilot cutter

A Bristol Channel pilot cutter is a specialised sailing boat the style and design of which is derived from the single-masted cutter. Based upon bulkier, less nimble, fishing boats but modified for use in the strong tides, winds, currents and coastline of the Bristol Channel its purpose was to quickly ferry local maritime pilots to and from large ships to assist in safe navigation into or out of any of the port cities in the Channel. The speed and manoeuvrability of the cutters allowed a minimal crew, in almost any weather, to quickly arrive at and easily lie alongside larger ships for easy and safe transfer of pilots. The craft was also equipped to stay 'on station' for days or even weeks, awaiting arrivals just outside the channel.

The design has been described as the best sailing boat design ever,[1] for being both high speed, highly manoeuvrable and yet easy to handle by just two crew.

With the advent of steam engines and vessels made out of metal, the wooden sailing cutters fell out of use and many were sold and later lost. Only a relative handful of the many Bristol Channel pilot cutters survive today.

When used to refer to sailing boats, a cutter is a utility vessel, single-masted and with a small crew (as few as two but often five or more) fore-and-aft rigged, with two or more headsails and often a bowsprit. A cutter's mast may be set farther back than on a sloop.[2] Cutters most often found utility in coastal work, either as patrol, ferry, packet or light cargo.

The Bristol Channel is one of the naturally most dangerous shipping lanes in the world, due to its huge tidal range of 13 metres (43 ft)[3] - second only to the Bay of Fundy in Eastern Canada[4][5] - currents hitting 7 knots (8.1 mph) (faster than many sailing ships of the day); all combining to hide rocks and constantly shifting sand bars.

Even today there are no road or rail crossings of the Bristol Channel, so direct crossings are necessarily made by sea or air, or less directly by the road and rail crossings via the River Severn estuary. The Channel can be a hazardous area of water because of its strong tides and the rarity of havens on the north Devon and Somerset coasts that can be entered in all states of the tide. Because of the treacherous waters, even today pilotage is an essential service for shipping.

As Bristol developed as a regional trading and financial centre, and as coal exports and the metal making industries rose in the South Wales Valleys as local sources of metal-ore rock quickly dwindled, the volume of shipping into and out of the Bristol Channel rose quickly. Owners who didn't want to lose valuable ships or their cargoes had need for local knowledge of the wind, tides and underwater dangers. 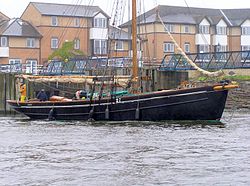 As most fishing boats were purposeful heavy working boats built for capacity of haul and stability, and further loaded down with heavy damp fishing equipment, those who operated as pilots needed a new type of boat. Early pilot boats were developed from single masted fishing cutter designs and twin masted yawls and latterly into the specialist pilot cutter.

Bristol Channel pilot cutters are generally seen as the most successful fore and aft rigged boats built during the age of sail. The keys of a good design were:[6]

The base design was based on a combination of a deep hull, long keel, heavy displacement and powerful gaff cutter rig. This made a lightweight and overpowered single masted boat with large steeply angled keels, making it deep draught under power and shallow draught in lighter sail.[8] However, competition-based evolution between different builders and commissioning owners enabled the design to improve over a period in excess of 90 years.[9] This continual experimentation to gain slight advantages created a fast boat that could operate in all weathers, resulting in what in the opinion of many was the best sailing boat design ever. As Admiral John R. Muir summarised:[10]

Pilot skiffs had developed for many years, but the earliest records date to 1795 held by Bristol Museum, which lists 12 registered pilot cutters with tonnages raging from 14 to 24 tons. The records of other ports suggest that older surviving cutters ranged in length between 33 feet (10 m) and 40 feet (12 m).[6] The earliest photographs of a cutter are of the boat Trial of Pill-based pilot Thomas Vowles (1847–78), showing a square rig sail that was a common feature on early cutters.[6]

Few period plans or detailed drawings exist, as often the builders were illiterate and as the designs developed from boat to boat, the blueprint for the next boat was taken from measuring and the experience of building the last boat, or from half-hull scale models which were then adapted. As a result, lengths in the 19th century varied between 40 feet (12 m) and 50 feet (15 m).[6] Construction methods were common, with: frames of English oak; planking of English elm; hulls sealed by pitch pine; interior fittings made of imported teak.[6] The boats had high bulwarks of between 1 foot 6 inches (0.46 m) and 2 feet (0.61 m), with a removable section through which a white-painted clinker-built rowing punt of 13 feet (4.0 m) could easily be put over the side.[6] Punts were painted white to allow them to be seen at night, and traditionally stored on the cutter's port-side.[6]

Speed was profit, and so in summer the sails were made of cotton, and in winter of flax. There were four sets of reefing points, with later designs encompassing roller-reefing, which although bringing its own boat handling issues meant that the chances of a broken boom crippling the boat were low.[6] The size, scale and number of any headsails were a captain's personal choice, but were often be used to fool other pilots into thinking that they were being passed by a fishing boat, or as a signature to be recognised by approaching cargo boat captains.[6]

Most early pilots were local fisherman who undertook both jobs, latterly licensed by the local Harbour Master to operate within their jurisdiction. Until after World War II, pilots were generally self-employed, and the quickest transport meant greater income.

Pilots in the Bristol Channel were self-employed, based at ports and harbours all along the Welsh and English coastlines. Bristol's pilots were actually based at Pill, Somerset, which consequently became a local boat building centre.[6] The relationship between Pill and Bristol became strained due to the distribution of the locally collected taxes, which was not solved until the passing of the 1807 Bristol Channel Pilotage Act.[6]

Pilots in the Bristol Channel were known locally as Westernmen, as their cutters raced westwards to meet the incoming ships in the Western Approaches of the Irish Sea and the Atlantic Ocean. Pilots either owned their own or hired cutters, which were permanently manned by a captain and an apprentice.[9]

Records from Pill suggest that the first official Bristol Channel pilot was barge master George James Ray, appointed by the Corporation of Bristol in May 1497 to pilot John Cabot's Matthew from Bristol harbour to the open sea beyond.[6] In 1837 Pilot George Ray guided Brunel's SS Great Western, and in 1844 William Ray piloted the larger SS Great Britain on her maiden voyage.[11]

Cutters would leave their home-port in the Channel for the Western Approaches in all weathers, either having been previously contracted by a shipping line to do so, or more frequently as self-employed individuals in competition with other pilots.[6][9]

From 1858 whilst in transit, cutters were required by law to display white side lights, but often on the outbound leg these were turned off so as to give a traditional westerly advantage over the competition.[6] Once on station — a situation that could last for a few weeks — the boats were required to display a pilot flag, which in 1849 became the white over red flag still in use today. At night, paraffin (kerosene in U.S. English) flares were required to be fired, with each port having its own sequence; Bristol's was two shorts and a long.[6]

Once a ship was encountered, whilst the cargo vessel heaved-to the cutter would pull-in on the lee-side. The apprentice would then row the pilot in the punt to the vessel, whilst the captain would sail-clear; the cutter would then return once the pilot was on board and the vessel underway. If the cutter had two pilots on board, the sequence would be repeated for a second vessel; if not, then she would race away home.[6]

Once steam power began to replace sail in cargo vessels some cutters would be towed back in,[6] a practice which was unpopular with both the vessels' and the cutters' crews.[9]

When not racing into the Western Approaches, cutter captains would take place in port-based "reviews", which were a local mixture of parading and open challenge-based racing. When in windy conditions, cutters would regularly win these open races against professional racing crews, when with full sails on they would reach speeds in excess of 10 knots (19 km/h; 12 mph).[6] Ilfracombe was a popular annual Review, which with its long flat firm sands provided a good place for repairs, as well as a good holiday location for the crew's families during the week.[6]

In 1913, all of the Cardiff pilots were amalgamated into a new company, the Steam Pilot Boat Company (Cardiff and Bristol Channel) Limited.[12] The company, licensed to operate all pilots in the Bristol Channel, had commissioned a series of new steam powered pilot boats which were to be worked out of Barry Docks. However, the new company did not as part of the arrangement buy the then in-service sail cutters, which remained owned by their captains. This started the process of many being sold into service as private yachts. The process of amalgamation was stopped during World War I, but due to their design and speed, the last pilot cutters only retired in the early 1920s once the new steam and diesel technology had overtaken them in speed and efficiency. Cariad was the last sail-powered pilot cutter to retire in 1922.[13] 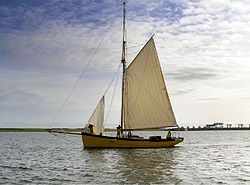 Mischief was a 45 feet (14 m) Bristol Channel pilot cutter built by Thomas Baker of Cardiff in 1906. She was commissioned and sailed by pilot William “Billy the Mischief” Morgan, who once sailed her into Ilfracombe harbour in such appalling weather that he and his boat earned great respect from the local pilots for "a first class piece of seamanship."[9]

After being sold in 1921, she was owned by various other commercial owners and then ended up in Valletta, Malta, where in 1954 the mountaineer and explorer Bill Tilman purchased her. After a refit, he sailed her over 110,000 miles (180,000 km), from the Antarctic to the Arctic, including stops in Patagonia, Greenland, South Georgia and Heard Island. Tilman wrote six books during his adventures in Mischief, until in 1968 she hit a rock off Jan Mayen Island in the Arctic Ocean, and then began to sink before being crushed by ice.[9]

Tilman continued his adventures in two other Bristol Channel pilot cutters, Sea Breeze and Baroque. Invited in his 80th year in 1977 to work as expert crew aboard the Simon Richardson skippered En Avant with mountaineers sailing to climb Smith Island, the ship disappeared with all hands whilst en route between Rio de Janeiro and the Falkland Islands.[14]

In 2007 a new Mischief was commissioned and built by RB Boat Building.[15]

Today, only 18 original cutters are believed to survive from the hundreds built. Some are available for private charter, whilst many attend maritime rallies and occasionally join the Barry Yacht Club's annual Cock of the Bristol Channel race:[16]

There is an increasing number of replica boats, often built for the private hire and charter market.