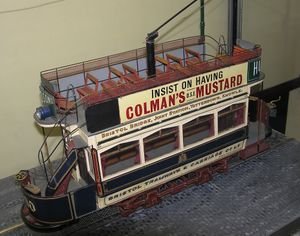 A scale model of an 1899 Bristol electric tram. Note that the driver stood in the open.

Bristol tramways were operated from 1875, when the Bristol Tramways Company was formed by Sir George White, until 1941 when a Luftwaffe bomb destroyed the main power supply cables.

In 1887 the Bristol Tramways Company merged with the Bristol Cab Company to form the Bristol Tramways and Carriage Company. The new company developed a fleet of omnibuses to serve the rest of the city and country areas. In 1912 it bought the Clifton Rocks Railway. In 1929 the White family sold its controlling interest in the company to the Great Western Railway, but by 1932 control had passed to the Thomas Tilling Group. William Verdon Smith (nephew of Sir George White) remained as chairman but was replaced in 1935 by J.F. Heaton of Thomas Tilling, so he could concentrate on the Bristol Aeroplane Company.

In 1937 control of Bristol's tramways passed to a joint committee of the Bristol Tramways company and Bristol Corporation.

Abandonment of the tramways began in 1938, but this was halted at the outbreak of World War II. Tram operations ceased in 1941 with the Luftwaffe's Good Friday raid, which set central Bristol on fire. A bomb hit Counterslip bridge, St Philips, next to the generating centre, and severed the tram power supply. The final tram from Old Market to Kingswood was given a push by passers-by and freewheeled its way into the depot.

Almost all Bristol's trams were scrapped; however, one is preserved by the Bristol Aero Collection which closed its museum at Kemble in May 2012 but expects to re-open in due course at Filton, Bristol.[1] Another memorial to the system is a length of tram track still embedded in St Mary Redcliffe churchyard, where it was blown by a bomb. Two lengths of intact track can be seen at the car park of the Gloucester Road Medical Centre, and a short section of track still exists on the approach to Temple Meads railway station. Another section of track used to be still in place near Castle Park, but this was lost when the area was redeveloped as part of the Cabot Circus development.

The Bristol Tramways company continued as a bus operator, but the name was not changed to Bristol Omnibus Company until 1957.

The electric tram routes were not numbered until November 1913. They were then numbered as follows:[2]